The blockade of the United States has set fire to China's most cattle streets! Why is Nanshan in Shenzhen so tough?

The streets of Yuehai in Nanshan District of Shenzhen were on fire.

Some netizens joked that the US trade war against China, from ZTE, Huawei to Xinjiang, has not been beyond the scope of the Yuehai Street.

However, according to the Beijing News on the 22nd, the community workstation of Yuehai Street Science and Technology Park said that three enterprises, Zhongxing, Huawei and Xinjiang, which were posted online, had moved out of the area.

Although enterprises have left, it is an indisputable fact that they have emerged from scratch, from small to large, and from big to strong in Guangdong and Hainan.

How strong is Nanshan District?

This article is compiled by Looking Think Tank.

According to statistics, there are 114 A-share listed companies registered in Nanshan District of Shenzhen, and most of them are high-tech industries. Correspondingly, there are 116 in Haidian District of Beijing and 19 in Pudong New Area of Shanghai.

Among the 114, there are 6 medical biology, 18 information devices, 19 information services and 21 electronics. 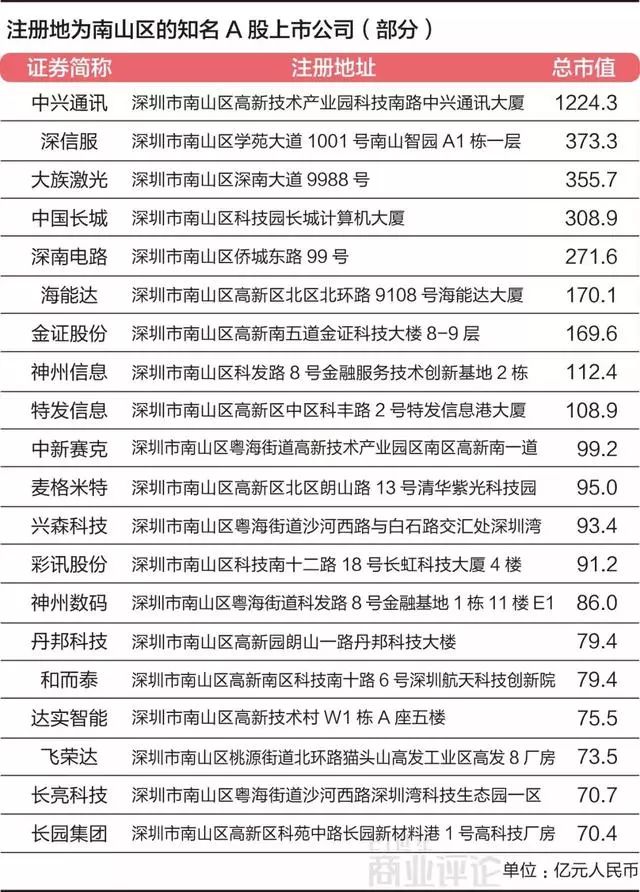 Apart from the relocation of Rouyu Science and Technology Headquarters to Longgang District, the remaining 13 enterprises are all Nanshan enterprises.

Shunfeng and Ruisheng Technologies are among the top 500 private enterprises in China, more than one-eighth of the province.

According to the Hurun Global Rich List 2018, Ma Huateng and Xu Jiayin were selected as the global Chinese rich with 295 billion yuan and 260 billion yuan respectively. 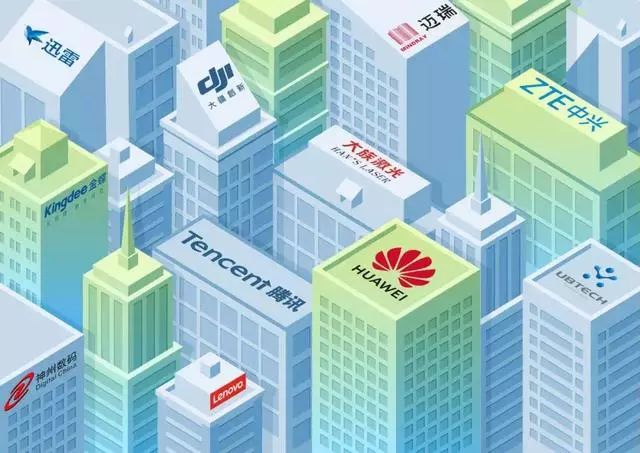 According to the data released by the local government, in 2018, the GDP of Nanshan District exceeded 500 billion yuan, reaching 501.8 billion yuan, ranking first in Guangdong District (County) and third in China for six consecutive years.

The resident population of Nanshan District is about 1.42 million, with per capita GDP exceeding 350,000 yuan, which is comparable to that of developed countries.

Nanshan District covers an area of 182 square kilometers and has eight streets under its jurisdiction. Among them, Guangdong and Hainan Streets, which have attracted much attention recently, have the strongest strength.

Yuehai Street is located in the center of Nanshan District. It covers an area of about 20 square kilometers. In this small area, GDP is as high as 25.9 billion yuan, accounting for half of the Nanshan District.

If Guangdong and Hainan are regarded as a city, its GDP easily ranks among the top 100 in the country.

Yuehai Street Chip Enterprises, such as Zhongxing Micro Company, which produces multimedia chips, once occupied 60% of the global market share in 2003.

Jingchen Semiconductor is the first chip of this year's report board, known as

In 2017, the assets of China Merchants Street Services reached 260.4 billion yuan, and even the eighth Shekou Street, the target assets of services exceeded 12 billion yuan.

Behind many high-quality enterprises and huge GDP, there are gratifying innovative capabilities and incubating capabilities.

In the "China Regional Incubation Capacity Evaluation Report 2016" (hereinafter referred to as the "Report"), Nanshan District ranked first with 87.58 points.

Nanshan is also ranked among the top innovative achievement indicators.

These two indicators fully reflect the superiority of the enterprise-led innovation model in Nanshan District.

Twelve enterprises and institutions, such as ZTE, Myry, Shenzhen University, Nantong University of Science and Technology and the Advanced Academy of Chinese Academy of Sciences, have won 10 national science and technology awards, accounting for 2/3 of the city.

Tencent won the Golden Prize for Appearance Design, accounting for 1/5 of the country's total.

In addition, the registration data of China Securities Association show that:More than 75% of venture capital and venture capital in Shenzhen are concentrated in Nanshan.

2.Where did it come from?

The development of Nanshan District in Shenzhen began with the reform and opening up.

October 9, 1978, one copy"Request for Making Full Use of Hong Kong Merchants'Bureau" 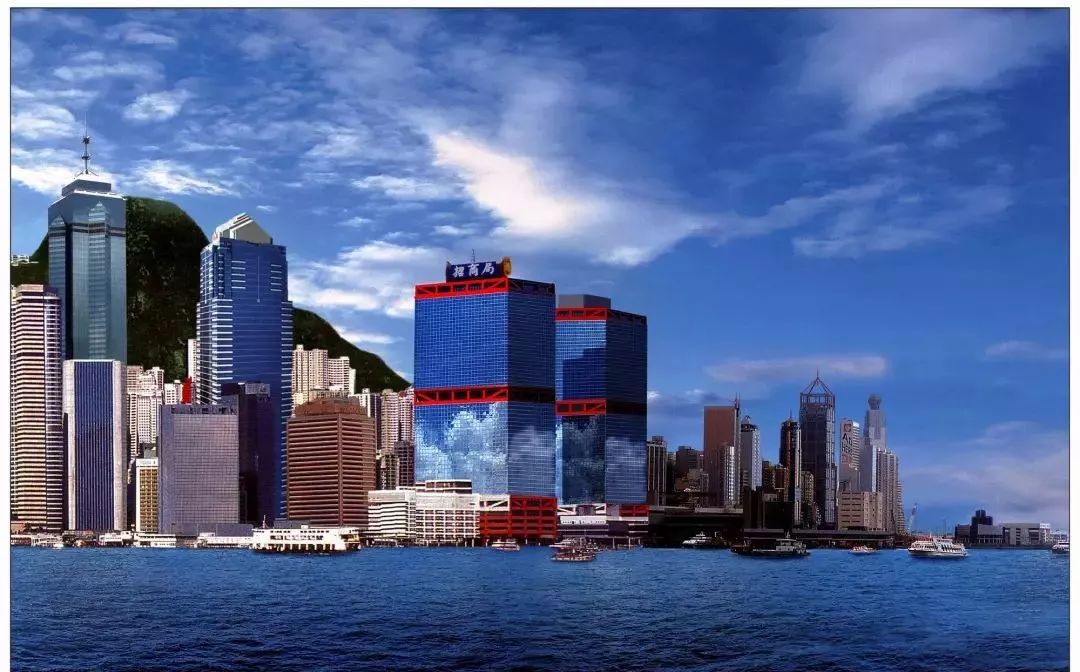 A few days later, the 29th chairman of China Merchants BureauYuan GengThe idea of preparing for the establishment of Shekou Industrial Development Zone in Shekou, Shenzhen, is formally put forward:

On December 18, while the Third Plenary Session of the Eleventh Central Committee officially opened in Beijing, the Ministry of Communications and Guangdong Province adopted Yuan Geng's idea.

Twenty-five days later, on January 31, 1979, Yuan Geng flew to Beijing to report to the central leadership in Zhongnanhai, offering to give China Merchants Bureau a piece of industrial land.

Yuan Geng was startled and said:

This peninsula is the future Shekou Industrial Zone and now belongs to the south.Mountain area.

On February 2, 1979, the State Council approved the establishment of the first export processing industrial zone in mainland China by the Hong Kong Merchants Bureau on 2.14 square kilometers of Shekou land.

It is rare for Shekou Industrial Zone to conceive of action for only three months.

After careful planning and design, on July 8, Shekou Industrial Zone officially broke ground and started construction, which is called China's reform and opening up.。 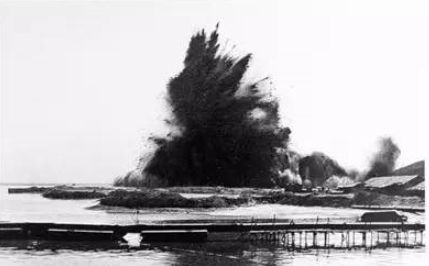 It took the Hong Kong Merchants Bureau nearly a year to build a 600-metre berth for cargo ships under 5,000 tons.

In this way, Shekou instantly has the function of starting and transporting. The industrial zone and Hong Kong interchange flights and passenger ships to solve the bottleneck of freight transport.

Yuan Geng traveled all over Hong Kong and borrowed from Hong Kong merchants and banks. In the past two years, China Merchants Bureau borrowed 1.5 billion yuan. The money is used to balance land, build industrial infrastructure and living facilities.

At the same time, Yuan Geng also greatly simplified the investment process, foreign businessmen to Shekou office, from land, agreements to recruitment, often in a month can be all done.

Soon,Shekou has become the most open industrial zone in China.Enterprises and talents poured in, more than two years, more than 100 enterprises.

In 1984, the only corporate float of hundreds of floats was held in Daqing, the 35th anniversary of the founding of the people's Republic of China in Beijing.It represents the spirit of Shekou and Shenzhen. 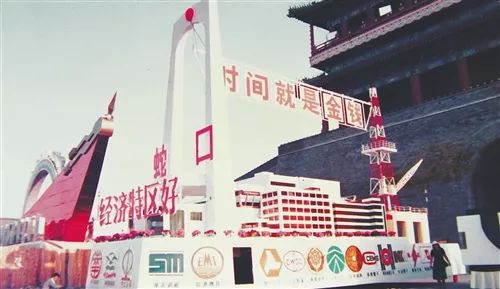 The picture shows the color car of Shekou Industrial Zone during the National Day parade in 1984. 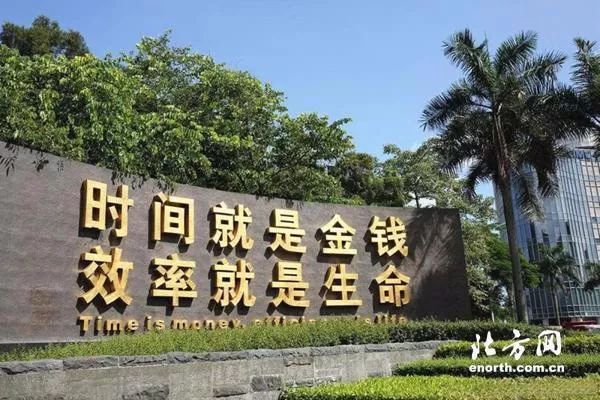 The picture shows the Shekou time Square in Shenzhen.

Apart from its remarkable historical achievements and superior geographical location, what are the reasons why Nanshan District attracts many enterprises?

There are three main aspects.

Data for August 2017 show that Nanshan has a country

At present, 9 of the 11 universities in Shenzhen are located in Nanshan, with 14 full-time academicians.

The report on the work of the government in Nanshan District in 2019 points out that Nanshan District has taken the lead in introducing some measures to promote the high-quality development of the private economy in the whole city. It has initiated the establishment of a private enterprise development fund of 4 billion yuan and a financing guarantee fund of 500 million yuan, in order to encourage and boost confidence in the private economy.

In terms of services, Nanshan District has done these things:

Third, the protection of intellectual property rights is the most stringent.

As Ma Xingrui, then secretary of the Shenzhen Committee, said in an interview in 2016,

More than 90% of R&D institutions are established in enterprises.

More than 90% of R&D personnel are concentrated in enterprises.

More than 90% of R&D funds come from enterprises.

More than 90% of job invention patents come from enterprises.

Because the main body of innovation is enterprise, the transformation efficiency of scientific and technological innovation achievements is high and the effect is good.

In order to protect the innovation power and achievements of enterprises,Nanshan District built the first omni-directional

What can Nanshan do in the face of pressure from the United States?

As Ren Zhengfei said in an interview,To some extent, U.S. sanctions have stimulated China to develop its electronic industry steadily.

At present, the Nanshan government is committed to accelerating the pooling of the world's top innovative resources in Nanshan.

I believe that the entrepreneurs in Nanshan District will be more and more deeply rooted under the pressure of the United States.

I don't know when the United States will really understand this sentence.

In this article, except for the pictures indicating the source, the rest are from the open network channels, which can not identify the source. If there is a copyright dispute, please contact the public name party.

1. The three Chinese companies that have made the United States angry are all running news about Li Jinghan, Daily Economic News, May 23, 2019, with this street.

3. The game between big powers has blown up China's most bullish street office. Why Shenzhen Yuehai is so fierce and vigorous? Director Huang, intersection master, Zhigu trend, 2019.5.22

4. Shenzhen Yuehai Street, which is the focus of the United States, has an annual revenue of more than 1.1 trillion yuan. What on earth is the origin? Kechuang Financial Exchange, May 22, 2019

8. Not only Huawei, ZTE, Dajiang, Shenzhen Nanshan this.

9. From ZTE to Huawei and then to the blockade of the United States, Shenzhen's manufacturing industry witnessed strong fast technology, 2019.5.22