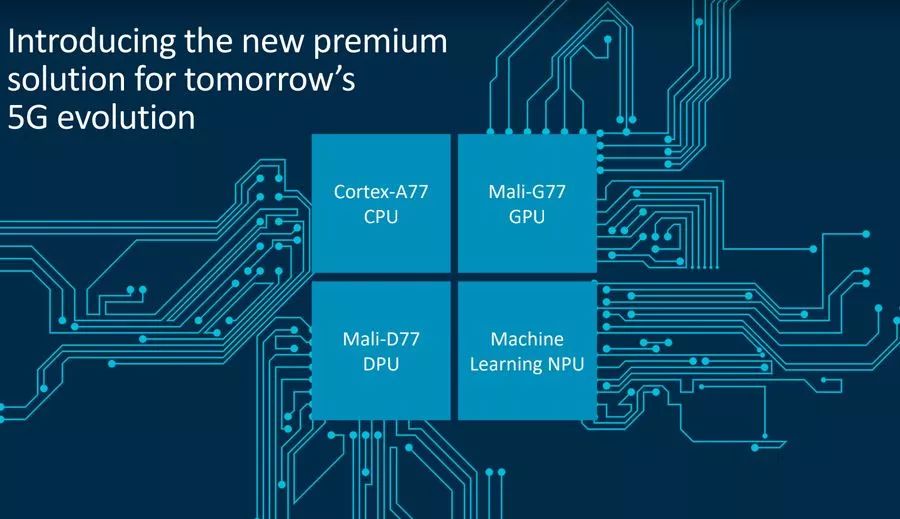 According to ARM, the new flagship IP will define high-end smartphone performance in 2020, providing a new generation of artificial intelligence experience.

Prior to this, Xinzhiyuan also reported that ARM announced the suspension of cooperation with Huawei, perhaps the flagship IP released by ARM will not be with Huawei.

However, Huawei has now obtained a permanent license for the ARM8 architecture (ARM8 is ARM's 32/64-bit instruction set, and current processors are the product of this instruction set). It is also possible to design the ARM processor completely independently, master the core technology and complete intellectual property, and have the ability to independently develop the ARM processor.

The Cortex-A76 released by ARM last year is actually a very successful core architecture. The combination of the new architecture and the 7nm TSMC process brings great performance and efficiency leap. The Kirin 980 and the Opteron 855 are good examples.

But ARM's real competitors are mainly from Apple's CPU design team. As far as CPU is concerned, Apple's A11 and A12 still have obvious performance and efficiency advantages. 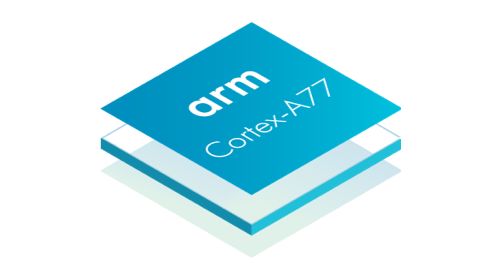 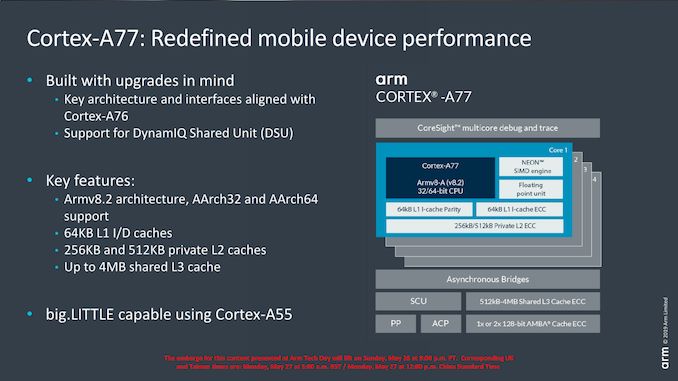 According to the parameters given by the government, there are several key characteristics as follows:

ARM indicates that Cortex-A77 and Cortex-A76 maintain the same 3.GHz peak frequency target. But manufacturers are not expected to reach such a high frequency in the next generation of Soc. 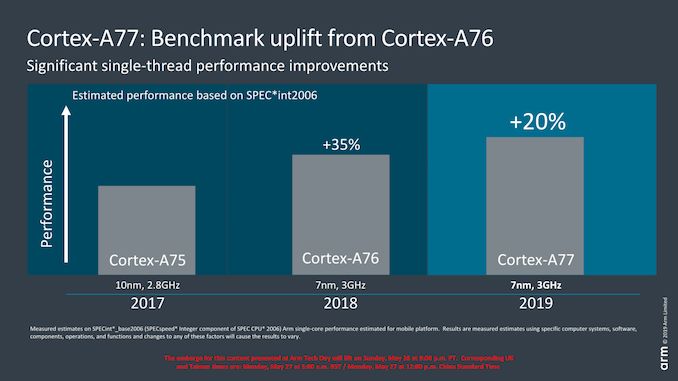 Higher performance also means better responsiveness to new applications and experiences that support AR. Through Cortex-A77, augmented reality technology in mobile games is expected to grow substantially in the next few years. Cortex-A77 will also support 5G. Ericsson's mobile report in November 2018 predicts that by 2024, about 1.5 billion smartphone devices will have 5G capabilities.

As we all know, 5G is a basic requirement for computing intensive ML, AR and other emerging devices. It will bring faster speed, wide bandwidth (5 to 20 Gbps), 8K resolution streaming media and 360 degree video.

In addition to Cortex-A77, ARM has also launched a new generation of Mali-G77.

Mali-G77 has made some significant improvements in performance, density and efficiency. Although last year's Mui-G76 introduced some major changes to the execution engine computing architecture, the G77 has improved even more and is out of touch with ARM's relatively unusual computing core design.

According to the official claim of ARM, Mali-G77 is better than its predecessors. 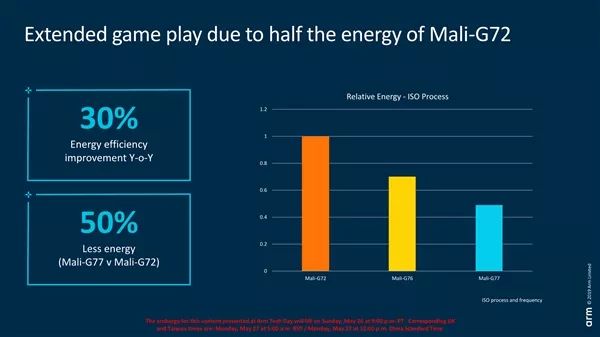 According to the official performance, the performance of ARM Mali-G77 is close to that of Apple A12, but also surpasses that of Qualcomm Adreno 640.

As smartphones and computers continue to use AI to realize the functions of scene recognition in photography or object recognition in augmented reality. At the same time, many companies have built specialized neuroprocessing units to deal with these tasks, thus reducing the pressure on CPU and GPU.

This time, ARM also released its latest NPU, providing up to twice the energy efficiency and three times the memory compression of the previous generation. Combining with the open source ARM NN software framework, ARM indicates that the eight-core version of the chip can provide up to 32 TOP/s performance.

What do netizens think? 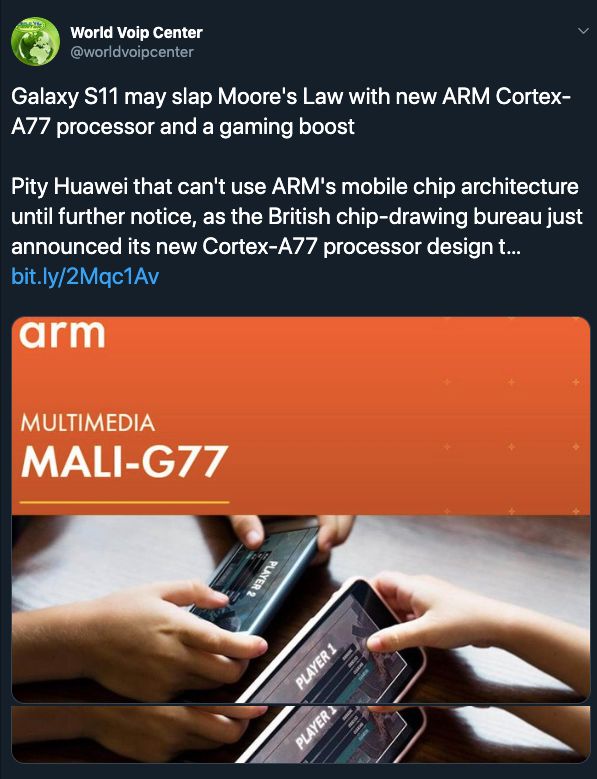 AbufrejovalIt is pointed out that while extending all Prefetch (preloading) seems to be a good thing for performance, it also increases the probability of bypass attacks.

SyxbitComplain: every Q of ARM

RaptormissleSo it looks like the SD 865 will eventually break the 4000 geekbench single-core score and probably get 12000 in multiple cores. Arm finally has a place in Apple's competitive environment because I really don't want to see A13 so hot!

GC2:CSI'm very dissatisfied with Apple's fever problem: 76 has made a leap in performance. To be honest, I'd be happy to get the same performance at a lower power. And cut/limit peak power... instead of buying fans and mobile phones

0ironThe evil enchantment sends out the soul with a smile and asks: then A77 belongs to

WilsonkfRespond0ironIt's very possible, but maybe it's too late. Most of the design phase should have been completed long before the ban.

LodixIt seems a bit frustrating to know about Hess's launch of Kirin SOC using ARM IP later this year and all that's happening.

So dear Xin Zhiyuan netizens, what do you think? Leave a message to tell you what you think of ARM.

Attachment: A Glance of Cortex and Mali's Family

ARM processor is widely used in the field of mobile communication because of its low energy consumption, low cost and high performance. Supercomputers, on the other hand, consume a lot of power, and ARM is also seen as a more efficient option.

But the integrated performance of embedded microprocessors on mobile devices is getting higher and higher. In order to meet the increasing demand for computing power, ARM has launched the Cortex series, which represents the cerebral cortex in English.

Cortex-A series pursues extreme performance, is the king of performance in Cortex series, and the production industry is constantly challenging the limit. Starting with A 76's 10nm, to A 77's 7 nm, Series A Series will launch 5nm chips in the future. 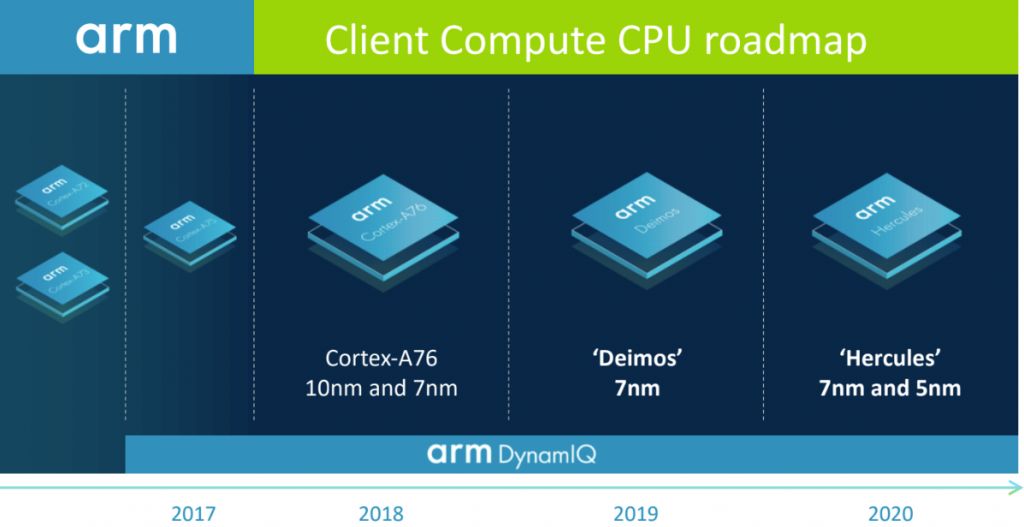 Series A utilizes multi-core technology to provide extensibility of single to four cores for traditional MPCore processors and up to eight cores for DynamIQ processors. It improves data security and privacy, advanced security and RAS functions, and integrated A I functions, so that DynamIQ-based systems can provide a wide range of solutions. Advanced power management functions integrated in DynamIQ processors can provide higher power savings for energy-saving design. Mainly used in performance-intensive similar, such as mobile devices, autopilot and medical treatment.

Below is a family photo of Cortex-A family.

In addition to ARM processor authorization, ARM has a complete set of GPU authorization schemes called Mali. Before, many chip suppliers who did not have independent development of GPU technology directly used the design of ARM processor Mali GPU, such as Samsung, Ruixin micro, exhibition, Italian semiconductor, full ambition and so on.

Like other three-dimensional display chips based on IP cores embedded technology, Mali display chipset does not provide a display controller (similar to graphics card) specifically used to drive LCD display images. Instead, it is a pure three-dimensional display engine, which loads images into the cache and displays them by a built-in display core specially responsible for image display processing. These images.

Related news
ARM released a new architecture CPU, GPU and AI core, Huawei will miss
The nightmare of Arm Mali GPU: Samsung and Huawei have turned to self-research!
AI performance up to 480 times! Arm in a hurry?
HuaweiMindSpore formal open source: AI development of sharp tools, support CPU、GPU
With CPU and GPU, why do we need special AI chips?
NVIDIA's first two new GPUs: refresh AI reasoning record, 314 times better performance than CPU
Hot news this week
Templates for creating new Twitter in the future? Musk's praise of WeChat has triggered a heated discussion on the whole network
Tencent Music's TME live will re-screen Jay Chou's concert on may 20 and 21
Sony's new LinkBuds S headset parameter exposure: only 4.8 grams of comprehensive battery life 20 hours
Weak demand in the mobile market! Domestic shipments of mobile phones fell 40.5% in March to a two-year low
Henan 4 village bank line cannot withdraw cash? CBRC responds! The public security organs have registered an investigation
Baidu: In 2021, an average of 56 billion malicious information of all kinds will be intercepted every year
"Chinese version of LV" is re -executed 680 million! Reporting the property clues of the chairman, up to 8.66 million yuan
Pig companies continue to increase technology, just launched the smart pig farm, another 100 million to set up a technology company
The Jingdong Express bulk order sent to Shanghai across the country is completely static? JD.com: Not true No such information has been published
"Tencent's more than 30-year-old employees account for nearly 60% of them" on the hot search Netizens: Don't mention 35 years old, start to mention 30 years old
The most popular news this week
The domestic screens are rolled to the 2K screen. Why don't Apple follow the roll?
Meizu 19 series coming? Meizu mobile phone appearance patent disclosure: the return of secondary screen
Jingdong crowdfunding 10000mAh mobile power supply: with Apple Lightning and Type-c dual wires
Mobile phone chip CPU energy efficiency ranking: it is comparable to A14
What can we learn about m& # 111nkeypox cases in many countries around the world?
Alibaba Daniel Zhang connects 300 platform merchants: do more practical things for merchants
At the age of 58, he was elected as the chairman of Everbright Bank! Former President of Bank of China and Construction Bank
Buy An Audi or a Tesla? Audi's new electric vehicles are on sale: from 300,000
The first domestic Tianji 1300 mobile phone did not fire first! More than 260,000 people made reservations
The Chinese team officially made up for the bronze medal in the Tokyo Olympic relay! Su Bingtian responded excitedly