Will supercomputers be vulnerable in space? American companies have done experiments for a year and a half 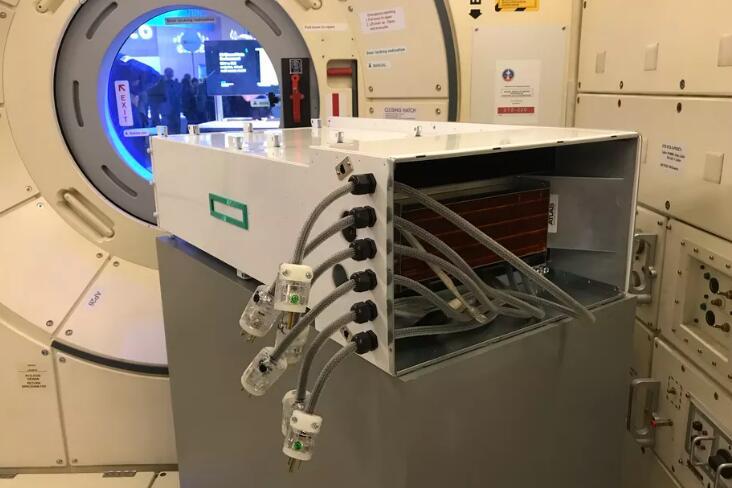 Original title: Supercomputer to undergo autopsy after returning from the space station

NetEase Technology News June 5, according to The Verge, after a year and a half on the International Space Station, HP Enterprise (HPE)'s "Space Supercomputer" (Spaceborne Computer) is now back to Earth, The company is preparing to rigorously test this machine. In the end, HPE wants to know how worn the machine is in orbit, in order to create a supercomputer that can be used to perform missions on the Moon and Mars in the future.

HPE has set a clear goal for this space-over-calculation experiment, is the average commercial super-computing used on Earth to operate in space? Supercomputing may be a valuable asset on spacecraft, but the space environment may also be a place where such machines are not working properly. Beyond the Earth's thick protective atmosphere, equipment is exposed to high levels of radiation from space cosmic rays and solar particles. Machines on the International Space Station also experience energy and temperature fluctuations that can cause damage to electronic equipment.

Due to these extreme environmental factors, computers and other electronic products that are sent to space are usually equipped with additional protection hardware. But doing so was expensive and time consuming, and HPE decided to use software to enhance space multiplication. The company's space supercomputer is equipped with specific software that can detect various parameters of the machine, such as power, temperature, voltage, etc., to see if they are outside the normal range.

The computer will then take the necessary precautions (such as shutdown) to avoid any catastrophic damage. HPE High Performance Computing Technology Officer Mark · Mark Fernandez said in an interview: "Sometimes, we can't operate supercomputers properly, we will say: & ltquo; well, I would rather not be able to operate in a short time. Nor are they willing to fail and be destroyed. & rsquo; Then when the supercomputer is new, we can continue the previous research. ”

HPE originally launched its supercomputer to the International Space Station in August 2017. The main purpose is to check some standards of space supercomputer in space to see if its various components are working properly. Fernandez said that this goal has been achieved. He said: "We have overcome all doubts. We have successfully completed the benchmark test in more than a year, and everyone in the industry is very impressed. ”

However, due to changes in certain schedules on the International Space Station, forcing this supercomputer to stay on the space station longer than expected, this also allows HPE to break through the limits it can. During the extended stay, the computer ran a program for NASA Langley to test the software used for navigation when the spacecraft entered the Earth's atmosphere and descended to the surface.

On Monday, the United States local time, this space supercomputer with SpaceX's dragon spacecraft returned to Earth. The ship carrying the spacecraft and its payload is now docked. This super-calculation will be the last thing that the Dragoncraft will bring back when it returns, and HPE will receive it on July 8th in Houston, Texas. There, HPE will analyze the computer and record all the failed parts and how they appear to be “old”. Fernandez said: "Because these super-computing components have been in space for more than a year, do they look the same as similar products on the planet? Or does it look older?”

Based on the findings of engineers, HPE will use this information for the next generation of space supercomputing. Fernandez said the company has not talked to anyone about the use of supercomputers in real-world space missions, but he hopes HPE will be able to apply this technology to future missions. Being able to run software on supercomputers and process data in real time is especially useful for astronauts who are farther away from the Earth because their communication with the ground control center can be significantly delayed.

If you don't need to have too many heavy equipment, then it is more likely to travel with the moon or Mars. Fernandez pointed out: "Any experiment you design in a ground laboratory today may use a relatively new computer system, and that's exactly what we want to be able to carry in Mars missions. “(small)

Related news
Deep net|Successful launch of the thousand-day one. How far is China's commercial space flight from Space X?
[observation] there are two types of Internet industry: Internet and A-share Internet
Hot news this week
||||||||
Celebrating Hubble's 30-year launch of NASA's "birthday universe" special page
865 Jiachi Meizu 17 access: support 30W fast charging
HuaweiP40 release: with HMS hard-core google, no price increase to grab the global high-end machine market
More than 60000 original articles are protected every day, and Tencent's "zhixinlian" helps the author of penguin to protect his rights
Awesome China scholar! The latest paper on the cover of Science: how the new coronavirus invades cells
Lenovo into Luo Yonghao's first collaborators? Insiders: not settled in contact
Xiaomi 10 / 10 Pro mobile phone goes out to sea: Show crooked nuts what the earth looks like under 100 million pixels
Is telecommuting inefficient? The father of Linux has five experiences
Lei Jun: Xiaomi 10 Pro has dominated the list for a month and a half
The most popular news this week
Xu Lei of Jingdong talks about Ruixing's financial fraud: it is destructive to the image of Chinese Enterprises
Exclusive interview with Sony Takahashi: X1 chip will be popularized throughout the line 8K will not be stranded
Amazon: the US station will no longer sell N95 masks and give priority to providing materials to hospitals
Wang Chen, vice president of Chinese Academy of Engineering
The price of "fracture" in steam game
How strong is the performance of Huawei Kirin 820? Look at the measurement
The biggest welfare of rice flour Festival announced: Xiaomi 30000 yuan, the whole house intelligent product is only 1 yuan
Huawei signs a non infringement Linux patent agreement
Google launches Art Transfer photo art style conversion tool
Apple's new or named iPhone se (2020): new 256gb version with three colors