MTS is called Mobile Tele Systems OJSC. It was founded in March 2000 and its predecessor, Mobile Tele Systems CJSC, was established in 1993. Sistema is its controlling shareholder (52.8%). MTS is the eighth largest telecommunications brand in the world, with 67.42 million users in Russia. It also has a wide range of businesses in Armenia, Belarus, India and Ukraine.

In the statement of Huawei's official website in Russia, Guo Ping, vice chairman and rotating chairman of Huawei's board of directors, said he was "very satisfied" with the agreement on "a strategically important area such as 5G":

We are pleased to reach a new agreement with MTS, especially in areas of strategic importance such as the development of 5G.

Huawei has obtained more than 16,000 patents in the 5G field, which makes Huawei the number one in the world. We hope that our joint efforts will bring Russia closer to the 5G era. 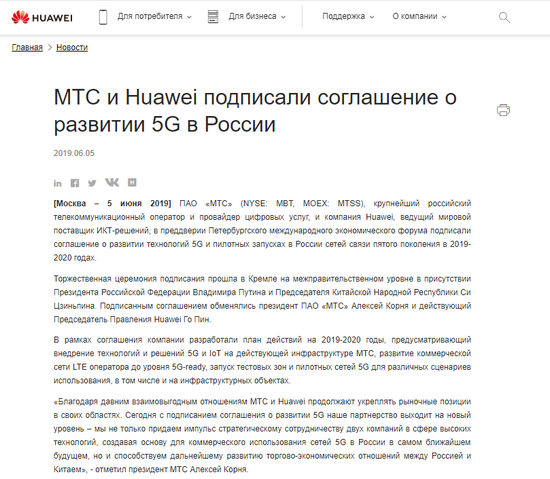 Russia is not the only overseas country that uses Huawei's 5G equipment. On the 30th of last month, EE, one of the UK's leading telecom operators, opened 5G services in six cities in the UK, which is the first officially launched 5G service in the UK – and EE is in the infrastructure of some of its 5G networks. The device used by Huawei is used.

During the opening process, the UKTVTaiwan also used Huawei to complete the world's first live TV broadcast using 5G networks. Its network effect has made the British audience amazed.

Today, the Ministry of Industry and Information Technology officially went to China Telecom,China MobileChina Unicom and China Radio and Television issued 5G commercial licenses. In this regard, Yang Chaobin, president of Huawei's 5G product line, believes that the next 10 years will be 5 years of 5G. Huawei will continue to increase investment in the 5G field. "Now we do not have terminals on the 5G network. The total investment is more than 10,000 people. We expect that our R&D investment in 5G will exceed RMB 10 billion this year." The number has doubled from 2018 (5 billion yuan).