In a letter of complaint, Gree Electric said that many consumers had previously reported Ox to the company.Air conditionerAccording to the opinion that the price is cheap but the power consumption is large, the following types of air-conditioning products produced by Oakes Air-conditioning Co., Ltd. are far from the energy efficiency value advertised and nominated by the company's laboratory (approved by CNAS and qualified for testing). Gree Electric said that the company commissioned a third party with professional qualifications to test and verify that the test results are consistent with its test conclusions, energy efficiency ratio and refrigeration power consumption test conclusions are not qualified. The production and sale of such products not only seriously infringe on the legitimate rights and interests of consumers, but also cause great damage to the national energy saving and emission reduction policies and the benign order of fair competition in the market. 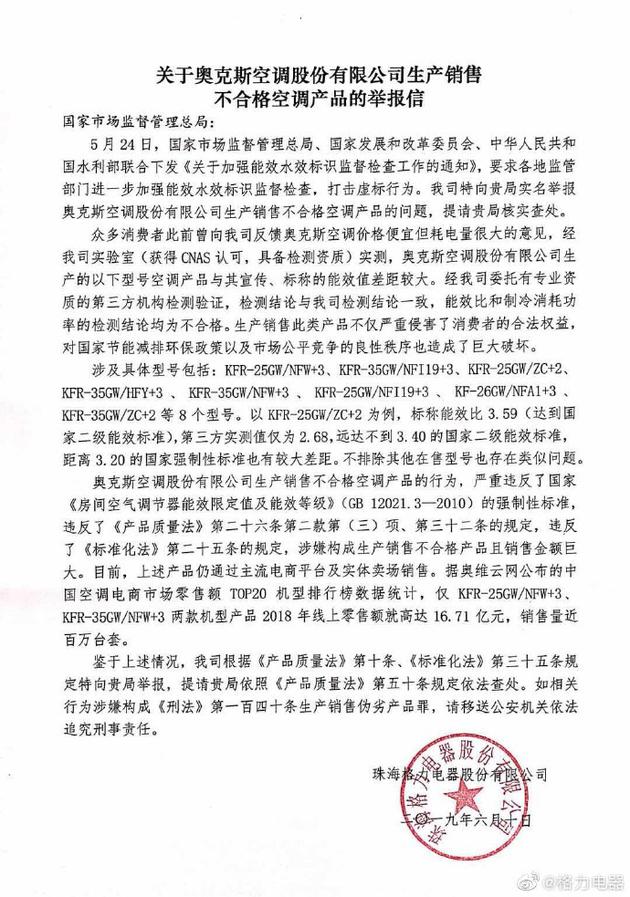 The letter also said that at present, the above products are still sold through mainstream ecommerce platforms and physical stores. According to the ranking of TOP20 models in China's air conditioning ecommerce market released by Oviyun, the online retail sales of KFR 35GW NFW 3 products reached 1.671 billion yuan and sold nearly a million sets in 2018, according to the KFR-25GW/NFW 3 alone.

For this reason, Gree Electric said that according to Article 10 of the Product Quality Law and Article 35 of the Standardization Law, it should report to the General Administration of Market Supervision. If the relevant acts are suspected of constituting the crime of producing and selling fake and inferior products under Article 140 of the Criminal Law, it should be transferred to the public security organ to investigate the criminal responsibility according to law.

The former Ox Group staff said that the Ox official will give a unified response as soon as possible.

Gree reported that Ox Air Conditioning: Energy Efficiency Ratio and Refrigeration Consumption Power were not up to standard

Related news
Do you believe it? Dong Mingzhu will spend four years recreating two Gree
Gree Reporting Ox Air Conditioning Gree: Obligation to Feedback to Relevant Departments
Grey's Report on the Upgrading of the Ox Incident: The Grey Officer slightly released evidence to report Ox
Gree and Oaks have been complaining for a long time? The two companies have mutual complaints against patents for inventions
General Administration of Market Supervision: Highly concerned about the real name of Gree Electric Appliances
China Consumption and Consumption Association: Pay close attention to Gree's real-name report that Oaks sells unqualified air conditioners
Gree "opens and tears" Oaks, has been brewing for many months? The latest response from both sides came.
Gree Electric: Unlimited purchase of Oaks air conditioning products Free to the agency for testing
Gree Oaks re-examines the issue of product reporting by the executives, see you on Monday?
Gree Electric: Air-conditionless recalled to Oaks in Saudi Arabia: There are two. See you Monday.
Hot news this week
Bitcoin mining machine giant Yibang international successfully listed in the United States: raising more than $100 million
China's second-biggest retail channel for smartphones in May Huawei is a step away
Huawei cloud's industrial Internet business experience: how to make the cloud serve the entire "circle of friends"?
Huawei's first mobile device equipped with Hongmeng may be Kirin 1020 with a 5-nm process
After the total ban, the United States announced the arrest of Fujian Jinhua General Manager Chen Zhengkun!
Japanese legislation forbids walking and playing mobile phones: mobile phones in public places should stand still
NASA announces the name of the headquarters building after its first black female Engineer
A reporter from the United States who was infected with the new coronavirus took part in the trump campaign rally
Most people don't know that the hole at the bottom of the original mobile phone also has this function
A hundred yuan 5g mobile phone is not far away. It's said that the new mt6853 of MediaTek has been launched
The most popular news this week
Wechat has not done this function for N years! Use this app to make up for the defects of wechat
Zhao Ming responds to the offline interview with Yu Chengdong: the pressure this year is much greater than that of last year. Huawei glory is the only two growth brand
How long will it take for a real 1000 yuan 5g mobile phone? Zhao Ming: we have to wait
Glory Zhao Ming: 5g mobile phones account for nearly 50%
Byte beat vice president reconnects Tencent?
It's incredible that Intel will push the z590 chipset pci4.0 early next year?
Selling business out of multinational market
What is the status quo of domestic memory chips?
Zhao Ming talks about 5 G mobile phone competition: do a good job of products without gimmick
What are the difficulties of large screen mobile phones in 5g era? Glory Zhao Ming: it's hard to change it after two years' sharpening