Overall, the report believes that the global Internet industry has entered a period of platform development. As the penetration rate of global Internet users has exceeded 50%, although global Internet users are still growing, the growth rate has slowed down. In addition, global smartphones Shipments began to decline year-on-year, and new growth points have been extremely difficult to obtain.

For the Chinese market, the report believes that the Internet industry will continue to grow rapidly as China's macro trends tend to be stable over the long term, the urbanization process accelerates, and the service industry continues to drive economic growth. At the same time, China has led the world in innovative products and business models. . 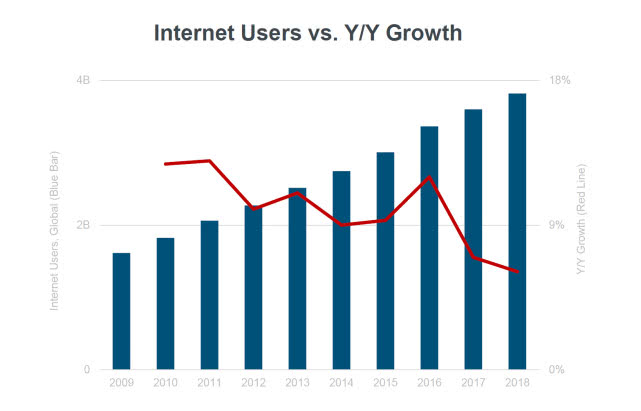 Despite the weakening of the number of people, the use of the Internet is still steadily increasing. The report pointed out that the average US digital media consumption in 2020 was 6.3 hours per adult, up 7% year-on-year.

Smartphone shipments, after a year-on-year growth in 2017, fell for the first time in 2018. 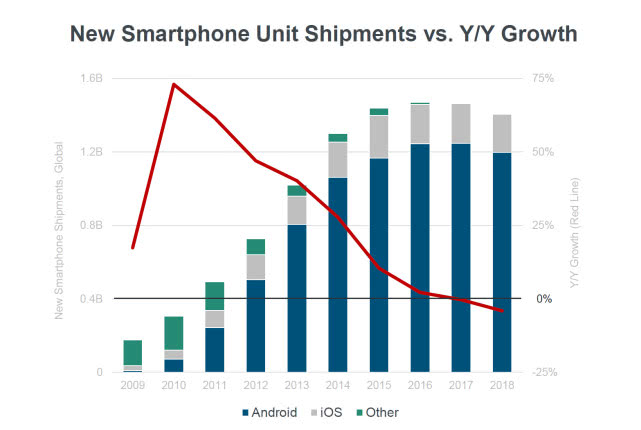 According to the report, large Internet companies have maintained their leading position in the industry in the past year, confirming the phrase “Strong Hengqiang”, the technology giants of China and the United States still maintain an unassailable industry position. . Of the top 30 Internet companies in terms of global market capitalization, the United States has 18 and China has 7 of them, the same as in 2017.

Despite its difficult position, the Internet giant's revenue growth slowed further in 2018. According to the report, the company's revenue from the highest Internet market value in 2018 was 11% year-on-year, down from 13% in 2017. From the past trend, the growth rate of Internet giants' revenue has accelerated from the first quarter of 2016 to the highest level of nearly 30% in the first quarter of 2018, and then the growth rate has continued to slow down. 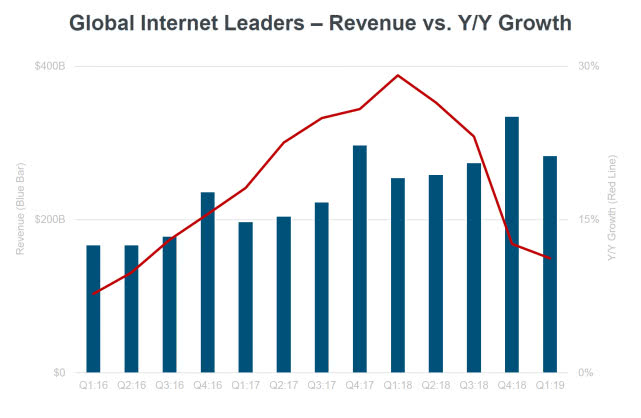 From the perspective of specific industries, e-commerce revenue growth rate has continued to slow down since the 4th quarter of 2017. From the end of 2018 to the beginning of 2019, there has been a rebound in growth rate, and the first quarter of 2019 has increased. The rate reached 12.4%, which was an increase from the 12.1% year-on-year growth rate in the fourth quarter of last year.

Interest in the Internet technology industry is still high, and the amount of financing in the primary and secondary markets has continued to hit new highs in recent years. The Nasdaq index, which is dominated by technology stocks, has been out of the bull market for 10 years since 2008. . 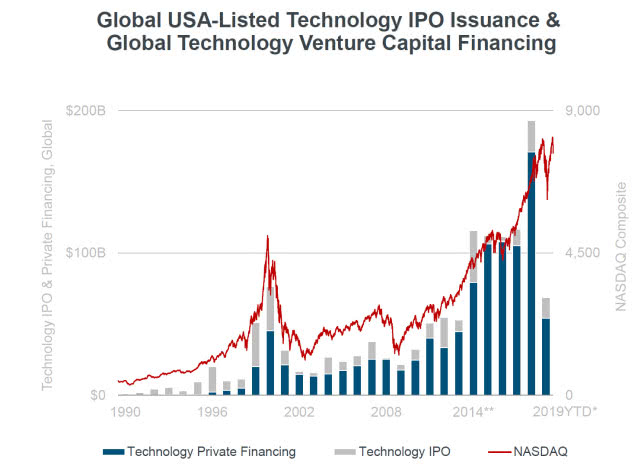 As for the development trend of China's Internet industry, as in previous years, the report has devoted a whole chapter to elaborate. The report first points out that China's macro trend is stable for a long time, although corporate confidence and consumer confidence fluctuate in the short term, but with The service industry continues to drive economic growth, the urbanization process is accelerating, and the per capita disposable income growth of urban areas is still stable and still good in the long run. 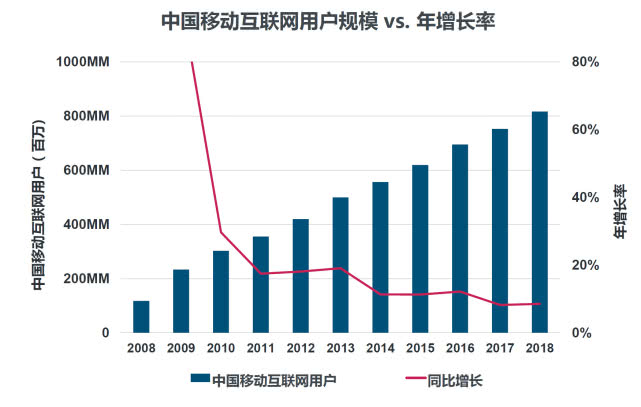 In 2018, the number of mobile Internet users in China has reached 820 million, an increase of 9% year-on-year. This growth rate has increased compared with last year. In 2018, mobile Internet data traffic increased by 189% year-on-year, and the growth rate is still accelerating year by year. The short video app is the main factor leading the number of users and the growth of time. The short-term and average daily usage has grown rapidly in the past 2 years. According to the category, the user's use of mobile short video has contributed to the major increase in duration in recent years. 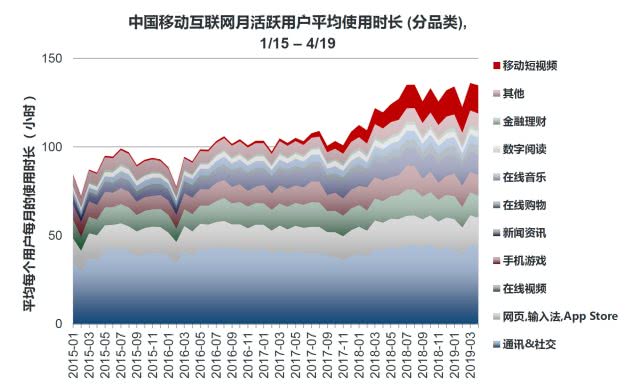 The report pointed out that the use of games in the Chinese Internet industry has changed the payment, e-commerce, retail, education and other industries, and listed WeChat from the "jump" "this small game, gradually developed a huge The small program ecosystem, Alipay through the ant forest as a gamified public welfare form, to enhance user activity, fight a lot of social + games to drive online shopping rapid growth.

The report also pointed out that the Chinese Internet industry has led the world in innovation in some products and business models. For example, WeChat's innovation by instant messaging to promote small programs and payment development has been adopted by many overseas Internet companies, including Kakao, Line, Facebook, etc., including the US group, Alipay and other applications, from the relatively single function in the past, gradually expanded into providing “Super app” for many local service functions, this strategy has also been adopted by many overseas technology companies, including Grab, Rappi, Uber, etc.

In terms of retail, the mobile live broadcast brings a personalized and interactive shopping experience, greatly improving the transaction conversion rate, and the new retail concept of online and offline integration, in the reconstruction of the consumer experience in the Internet era.

In terms of education innovation, it is going from the traditional offline to the online, including various online schools, live broadcasts, dual-skills mode, etc., to form online and offline integration.

Related news
Chromium version of Microsoft Edge browser will ship with Internet Explorer
Internet Archive: recording the forgotten Internet
Hot news this week
Bitcoin mining machine giant Yibang international successfully listed in the United States: raising more than $100 million
China's second-biggest retail channel for smartphones in May Huawei is a step away
Huawei cloud's industrial Internet business experience: how to make the cloud serve the entire "circle of friends"?
Huawei's first mobile device equipped with Hongmeng may be Kirin 1020 with a 5-nm process
After the total ban, the United States announced the arrest of Fujian Jinhua General Manager Chen Zhengkun!
Japanese legislation forbids walking and playing mobile phones: mobile phones in public places should stand still
NASA announces the name of the headquarters building after its first black female Engineer
A reporter from the United States who was infected with the new coronavirus took part in the trump campaign rally
Most people don't know that the hole at the bottom of the original mobile phone also has this function
A hundred yuan 5g mobile phone is not far away. It's said that the new mt6853 of MediaTek has been launched
The most popular news this week
Wechat has not done this function for N years! Use this app to make up for the defects of wechat
Zhao Ming responds to the offline interview with Yu Chengdong: the pressure this year is much greater than that of last year. Huawei glory is the only two growth brand
How long will it take for a real 1000 yuan 5g mobile phone? Zhao Ming: we have to wait
Glory Zhao Ming: 5g mobile phones account for nearly 50%
Byte beat vice president reconnects Tencent?
It's incredible that Intel will push the z590 chipset pci4.0 early next year?
Selling business out of multinational market
What is the status quo of domestic memory chips?
Zhao Ming talks about 5 G mobile phone competition: do a good job of products without gimmick
What are the difficulties of large screen mobile phones in 5g era? Glory Zhao Ming: it's hard to change it after two years' sharpening