There is no doubt about the results of Firefox and Chrome performance tests.

Although the market share of Chrome and Firefox is very different, does this mean that the strength level of both is the same? Let's take a look at the latest Linux Web browser benchmarks.

P.S: The browsers tested are all Linux versions, and they all provide WebRender functionality. 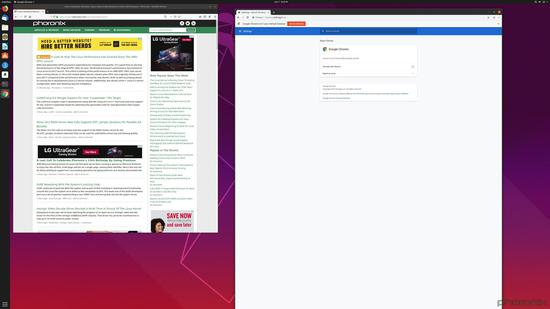 The test environment and machine configuration are as follows: 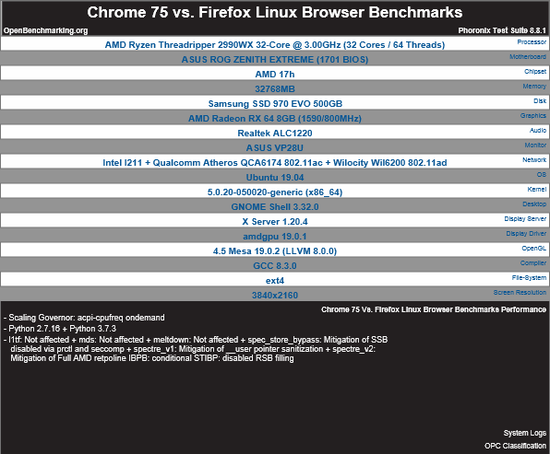 This test uses popular browser benchmarks, and automated tests based on Elenium/Web Driver are provided by Phoronix Test Suite, a Phoronix test suite. 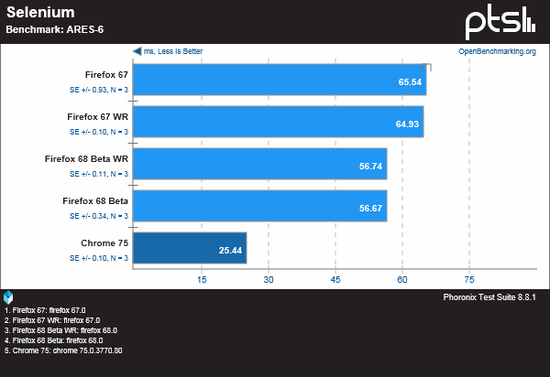 Beginning with the ARES-6 benchmark test, ARES-6 is used to test the speed at which browsers run Javascript functions, including some mathematical functions. The lower the score, the faster the running speed.

As you can see, on Linux, Chrome 75 still runs JavaScript functions much faster than Firefox. However, compared with Firefox 67, the ARS-6 benchmark score of Firefox 68 has improved considerably. 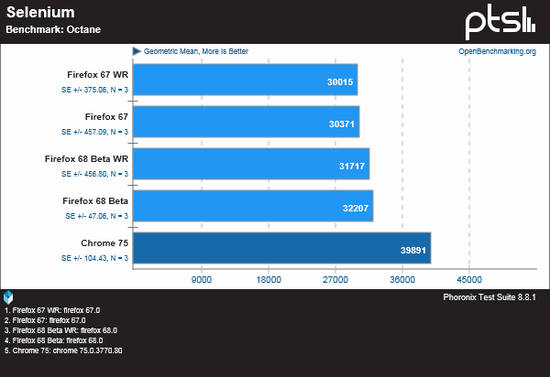 In the Octane JavaScript benchmark, Chrome still leads Firefox a lot. Similar to the ARS-6 benchmark, however, Firefox 68 Beta's performance has improved slightly over the current stable version, about 6% faster.

The Octane benchmark is designed to evaluate the performance of a browser in executing a large and complex Web application that users need daily. 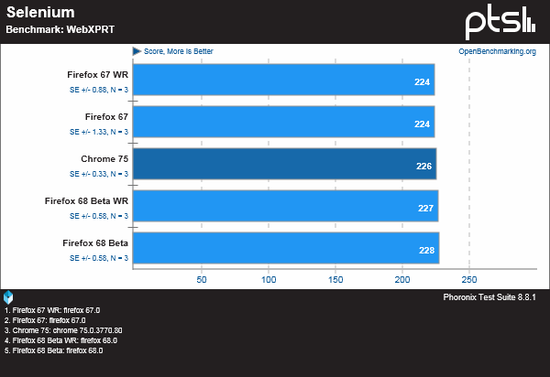 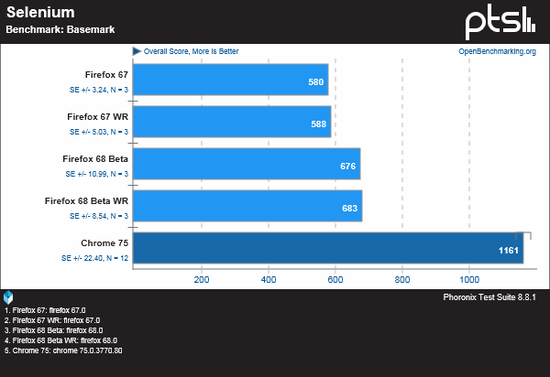 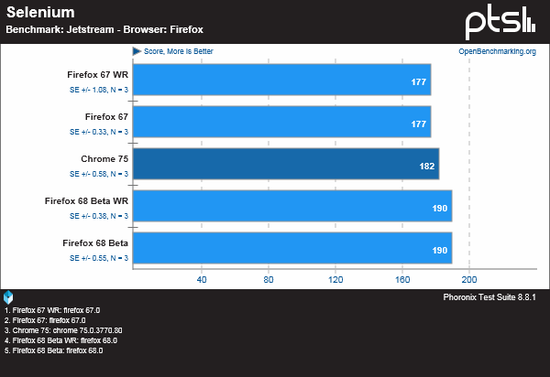 JetStream is a scoring software for testing latency and throughput. It belongs to intensive testing. The larger the test value, the better the result.

After watching so many tests, Firefox has been in the doldrums, and the results of this test are a few that Firefox is better than Chrome. As you can see, Firefox 68's performance is slightly higher than Chrome's, and the gap between Firefox 67 and Chrome 75 is relatively small. 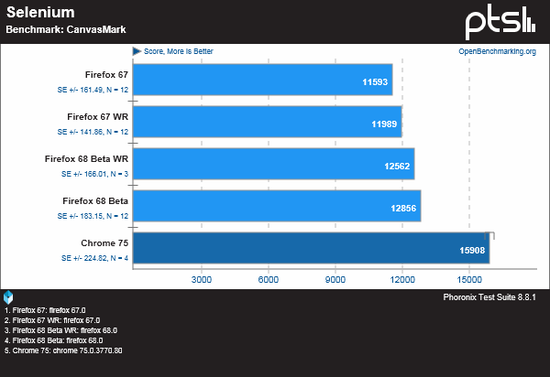 In the HTML 5 CanvasMark test, Chrome 75 again surpassed Firefox 67, but Firefox 68 is following Chrome in an effort to reduce the gap between the two. 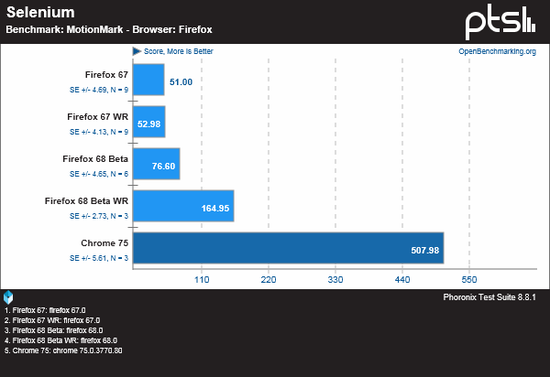 MotionMark benchmark is a test for browser graphics rendering function. As you can see, thanks to WebRender, Firefox 68 Beta's performance gap before and after WebRender was enabled is significant, and it has more than doubled since it was enabled. But compared with Chrome, Firefox still lags far behind, and Chrome 75 is almost 10 times as good as Firefox 67. 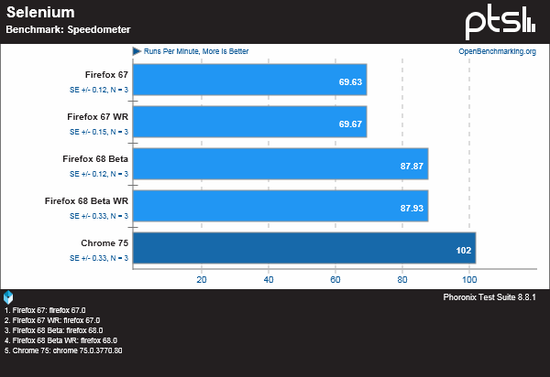 Speedometer is a performance test that repeats the same operation using DOM API. The higher the value, the better. The test results are in good agreement with the previous ones: Firefox 68 performs better than Firefox 67, but still lags behind Chrome 75. 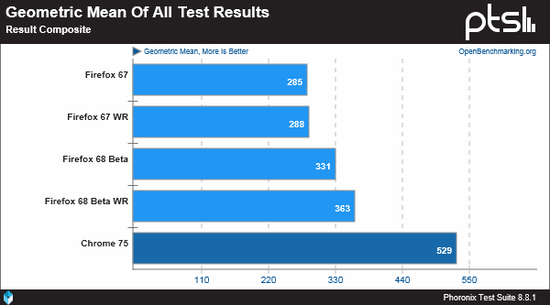 According to the above benchmark test results, the statistical summary and the calculation of the geometric average, the results are as shown in the figure above.

The Firefox 68 Beta is about 16% faster than the current stable Firefox 67.0, up to 27% if WebRender, is enabled. Although Firefox performance has improved a lot, in Chrome this

Related news
There is no doubt about the results of Firefox and Chrome performance tests.
No to Chrome, and Firefox and Safari will be the winner?
Performance test: Firefox 73 vs. chrome 80
Hot news this week
Rich AMD b550 motherboard: 55 models are fully exposed
Director Wang Jing! Tencent Video: see you on May 22
Huawei the cheapest 5 G phone! The Z 5G is about to be released :90 Hz Water Drop Screen Plus
Huawei released operation data: an increase of 131.7 billion in R & D investment 29.8% Inventory up 167.4 billion 73.4%
Windows 10May 2020 information summary: release time, new features, etc .(figure)
Why does China's semiconductor industry not have to be pessimistic?
Japan's first listed company goes bankrupt: China Ruyi group's abacus fails?
Novel coronavirus pneumonia will be approved by the European Union after the United States and Japan. Reed will be used to treat new crown pneumonia.
Li Nan: abandoning Google and Qualcomm completely also has a single market of millions
Three generations of sharp dragon make new! Amd ryzen 7 3750x / 3850x exposure: 105W super frequency little prince?
The most popular news this week
Microsoft speed! Windows 10 2021 will come next month
Make masks more fashionable? US clothing industry takes over the market of non-medical masks
Analysis on the performance improvement of the whole line high frequency multi-core ten generation core game
Microsoft Surface duo brings improved stylus support for Android system
Microsoft is recruiting 16 engineers to speed up the development of folding dual screen mobile phones
[multi map] the new Cortana is separated from the "beta" label in the Microsoft Store
Chinese engineers suspected of cheating $1.5 million in anti epidemic loans in the United States: arrest
48 million main camera 120 Hz screen Redmi the most affordable 5 G mobile phone on the shelf :1799 yuan
There's a new change in iPhone 12: airpods sales are going up, and apple is doing it on purpose
Huawei Changxiang Z brings dual-mode six band 5g to the stage to make 5g purchase in one step