According to the Dell & rsquo;Oro Group market report that tracks server spend, Dell is the number one server vendor in the first quarter of 2019, based on revenue share. Dell is followed by HP, Inspur, Lenovo, Cisco, Huawei and IBM.

The report found that the global server market grew at the slowest rate in eight quarters, up only 1% year-on-year. Dell’Oro attributed this slow growth to the slowdown in spending by cloud service providers and businesses. This echoes the information sent by top server vendor executives. In a recent first-quarter earnings conference call with investors, they attributed weaker-than-expected server sales to cloud computing and corporate sales.

At the end of May, Dell Technologies reported a 9% drop in server and network revenue. HPE's hybrid IT business, including server revenue, fell 4% year-over-year.

Baron Fung, chairman of the Dell & rsquo; Oro Group, said in a statement, “The server market began to grow slowly, with a growth rate of only 1%, after achieving a record 29% revenue growth last year. & rdquo; & ldquo; This quarter, server shipments fell for the first time in five quarters, with the end of the update cycle, the average price of the server began to stabilize. ”

Although the cloud service provider's slowdown in capital expenditures led to a decrease in server purchases this quarter, Fung said it expects cloud service provider server spending to be fully restored by the end of 2019, and “expand capacity” as the company will continue to work The load is transferred to the public cloud.

According to the report, in the first quarter of this year, the data center-related capital expenditures of the four major cloud service providers increased by 5% year-on-year. Previously, another market report released by Synergy Research Group also showed that compared with the record level of 2018, the capital expenditure of ultra-large operators decreased by 2% in the first quarter of 2019, totaling slightly higher than 260. One hundred million U.S. dollars. 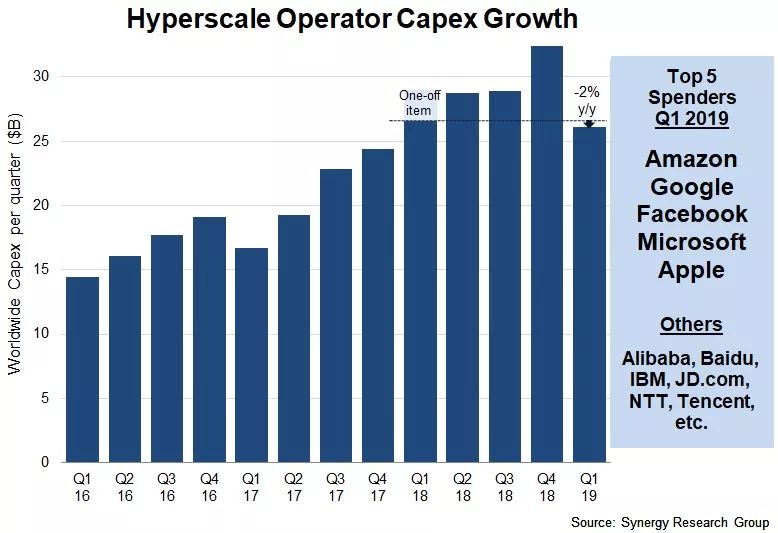