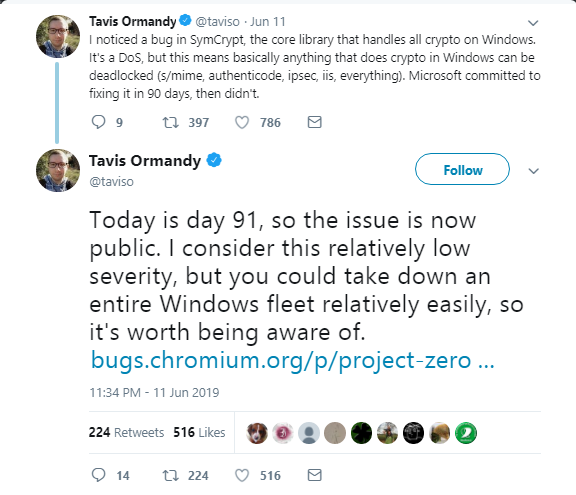 The vulnerability is actually a bug in SymCrypt, which is responsible forWindowsA core encryption library that implements an asymmetric encryption algorithm and implements a symmetric encryption algorithm in Windows 8. Ormandy found that by using a malformed digital certificate, he can force SymCrypt calculations into an infinite loop. This will work effectively on WindowsserverPerform a denial of service (DoS) attack, for example, a service that runs the IPsec protocol required to use e-mail and calendars with a VPN or Microsoft Exchange Server.

Ormandy also pointed out that "many software that handles untrusted content (such as anti-virus software) will call these routines on untrusted data, which will cause them to get stuck."

However, he still rated it as a low-severity vulnerability, adding that the vulnerability makes it relatively easy to tear down the entire Windows fleet, so it's worth noting.

The bulletin published by Ormandy provides details of the vulnerability and an example of a malformed certificate that could lead to a denial of service.

As mentioned earlier, Project Zero has a 90-day disclosure deadline. Ormandy first reported this vulnerability on March 13, and then on March 26th,MicrosoftConfirm that the security bulletin will be released and fix it in the Patch Tuesday of June 11. Ormandy believes that “this is 91 days, but it is within the extension period, so it is acceptable.”

On June 11th, the Microsoft Security Response Center (MSRC) stated that "the patch will not be released today, and will not be patched until it is released in July due to problems found in the test." Ormandy disclosed the vulnerability.

Related news
The new Windows 10 0day vulnerability was maliciously disclosed by hackers
Sandbox Escaper has released another Microsoft 0day critical vulnerability
Google Researcher Reveals Windows 10 0day Vulnerability
Hot news this week
Wechat has not done this function for N years! Use this app to make up for the defects of wechat
Gree's response to "being disqualified from winning the bid": a mistake made by the bidder in sorting out the materials
IPhone 12: it's more like throwing away the charger
Apple wants to know: what do you do with the charging head of the old iPhone?
Luo Yonghao comments on ideal one: Tesla Model 3 is not a car of a level at all
A 400-brand evacuation Facebook： the internet giant strangled?
How long can "Laoganma" carry on after winning Tencent?
The dotcom bubble? U.S. technology stocks surpassed their 2000 highs relative to the S & P 500
ASUS main board leads Rog day fans Carnival highlights
Tesla's warranty service suddenly shrinks: touch screen and media control unit halved to two years
The most popular news this week
Arm China's 32-bit embedded processor IP "Star" has 7 projects
Sources say the U.S. Department of justice is conducting a criminal investigation into wirecard
Google Chrome browser status_ Access_ Crash due to violation error
LGBTQ community Blue City brothers once soared more than 124% in the market
Without headphones and chargers, the iPhone 12 is even $50 more expensive
Microsoft's free benefits! How to save win10 beautiful lock screen wallpaper
Garmin launches a series of new smart watch products with solar charging
NASA Sherloc will travel to Mars to search for evidence of life
Google slide shows Android 11 may be available on September 8
ASUS announces lingyao 14 sharp dragon edition Notebook: lighter than me, not thinner than me