Adding new rival Tencent's investment in OnTime will be launched this month.

To launch the service, OnTime also announced on its Weibo account that users can get a car in Guangzhou for only 0.01 yuan on Thursday and Friday before it is officially launched.

Following the defeat of Uber in 2016 by drip-drip travel, China's car-calling service market is warming up again. Tencent is a major investor in Droplet and OnTime, while other OnTime investors include Guangzhou Automobile Group and Guangzhou Bus Group. 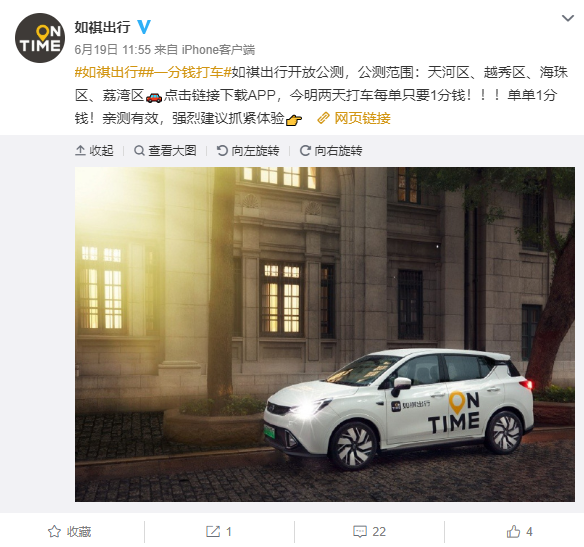 At present, the penetration rate of drip travel users in China's car-calling market is 88%, but the competition is becoming increasingly fierce. Earlier this month, Metro Volkswagen commented on the launch of a comprehensive taxi call service in 10 Chinese cities. Users can compare the quotations of several platforms, such as Cao Cao's special car and the first FAW approximate car, and call through the Metro taxi service.

It also opened its own platform to smaller competitors for the first time. In a pilot project in Chengdu, users can choose to call cars sent in seconds.