Analysis of operational data of the three major operators in May: China Mobile "full of blood resurrection"

Equally remarkable is China Telecom, which has a stable track record. China Telecom has maintained a steady and positive trend in terms of user growth in the past two years. It is impressive in terms of the net increase in mobile users and continues to draw closer to China Unicom. difference. Compared with the growth rate of friends, China Unicom has fallen behind.

Operational data has its own merits 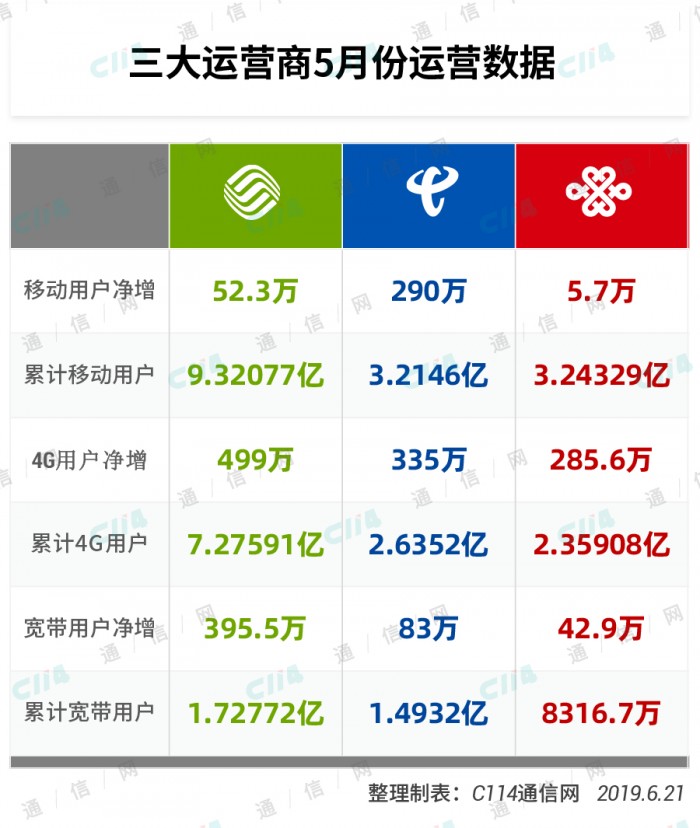 The Internet card, once represented by Tencent Wangka, has sprung up and made China Unicom exaggerate for a while. Not only has it harvested a lot of young users, but it has also led the unrestricted package competition since then. China Unicom's package users represented by Tencent Wangka alone exceed 100 million, accounting for more than one-third. After that, various Internet companies and operators jointly launched products that have sprung up, and they have been rampant in the short term. At this point, China Unicom's initial competitive advantage in relying on Tencent Wangka competing products is no longer, and the days of surpassing the other two in terms of the growth of 4G users are gone forever.

The reason is nothing more than network quality problems. For operators, the only advantage that can win users' favor is wide coverage and high quality network quality. Among the three major operators, China Mobile has the largest number of 4G base stations (as of the end of 2018, 4G base stations 2.41 million), followed by China Telecom (as of the end of 2018, 4G base stations have a total of 1.38 million), China Unicom has the least (as of 2018) At the end of the year, 4G base stations are 990,000). Users also choose to vote with their feet, and the 4G base station covers the widest range of China Mobile has become the top choice. Therefore, in order to obtain users, improve the depth of 4G network coverage, continuously eliminate coverage blind spots, and continue to improve the quality and coverage of mobile network services is a good strategy.

In the wide market at home, China Unicom and China Telecom have also lost their tracks. High pre-coverage and high quality have become the main weapon in the competition of the fixed-line broadband market. China Mobile has been able to cross the border in the fixed broadband sector, and has continuously surpassed China Unicom and China Telecom, which are the oldest in the short term, and has become the leader in this field. In addition to the price impact, high pre-coverage and high quality are also important factors.

Related news
Windows 10 May 2019 updates will no longer tie up the Candy Legend game
Windows 10 May 2019 Start Menu Improvement Inventory: More Simple and Fashionable (Figure)
Windows 10 May 2019 Enterprise Edition Updated Assessment Edition Mirror has also been released
In addition to the Sandbox, Windows 10 May 2019 has these small improvements worthy of attention (Figure)
Microsoft Windows 10 May 2019 update officially started to push globally within a few weeks
Three ways to upgrade Windows 10 May 2019
[Tips] How to download Windows 10 May 2019 updates directly from a browser
Starting from Windows 10 May 2019: These functions will be removed/discarded (figure)
Windows 10 May 2019 update causes Sandbox to not work properly (Figure)
Windows 10May 2020 information summary: release time, new features, etc .(figure)
Hot news this week
Rich AMD b550 motherboard: 55 models are fully exposed
Director Wang Jing! Tencent Video: see you on May 22
Huawei the cheapest 5 G phone! The Z 5G is about to be released :90 Hz Water Drop Screen Plus
Huawei released operation data: an increase of 131.7 billion in R & D investment 29.8% Inventory up 167.4 billion 73.4%
Windows 10May 2020 information summary: release time, new features, etc .(figure)
Why does China's semiconductor industry not have to be pessimistic?
Japan's first listed company goes bankrupt: China Ruyi group's abacus fails?
Novel coronavirus pneumonia will be approved by the European Union after the United States and Japan. Reed will be used to treat new crown pneumonia.
Li Nan: abandoning Google and Qualcomm completely also has a single market of millions
Three generations of sharp dragon make new! Amd ryzen 7 3750x / 3850x exposure: 105W super frequency little prince?
The most popular news this week
Microsoft speed! Windows 10 2021 will come next month
Make masks more fashionable? US clothing industry takes over the market of non-medical masks
Analysis on the performance improvement of the whole line high frequency multi-core ten generation core game
Microsoft Surface duo brings improved stylus support for Android system
Microsoft is recruiting 16 engineers to speed up the development of folding dual screen mobile phones
[multi map] the new Cortana is separated from the "beta" label in the Microsoft Store
Chinese engineers suspected of cheating $1.5 million in anti epidemic loans in the United States: arrest
48 million main camera 120 Hz screen Redmi the most affordable 5 G mobile phone on the shelf :1799 yuan
There's a new change in iPhone 12: airpods sales are going up, and apple is doing it on purpose
Huawei Changxiang Z brings dual-mode six band 5g to the stage to make 5g purchase in one step