In terms of the number of patents, China has become the world's largest patent applicant, but for the technology industry, the core patent is the standard essential patent, which is the SEP patent, which refers to the inclusion in international standards, national standards and industries. In the standard, and the patents that must be used in the implementation of the standard, that is to say, when the standardization organization develops certain standards, some or all of the draft standards have no alternatives due to technical or commercial P, and it is inevitable to involve patents or patent application. When such a draft standard becomes a formal standard, the implementation of the standard will inevitably involve the patented technology contained therein.

To put it simply, the manufacturer owns the SPE patent, and the other companies can't circumvent the patent anyway. They have to use it and have to pay. Qualcomm earns a lot of money in the 3G and 4G eras because of the licensing agreement. SEP patents, other vendors have to purchase licenses.

In the 5G era, the patents of Chinese companies have also followed. According to IPLytics, a patent analyst, as of March 2019, Chinese manufacturers have applied for 34% of the world's major 5G patents, South Korea 25%, the United States and Finland each accounting for 14%, Sweden accounting for nearly 8%, and Japan accounting for 5%. Canada, the United Kingdom and Italy ranked in the top ten, accounting for less than 1%. 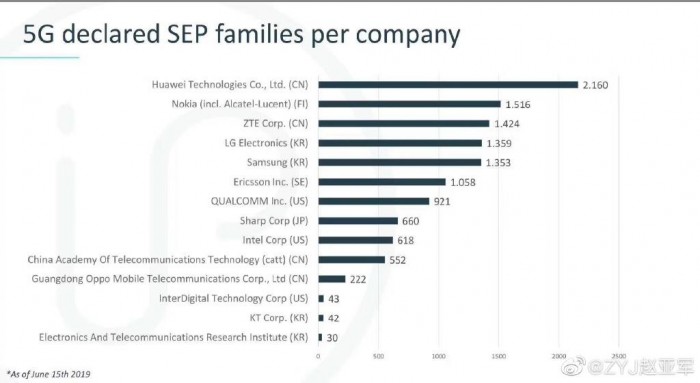 The above data is not up-to-date. ZTE’s science blogger @ZYJ Zhao Yajun recently released the latest list of 5G SEP patents. Huawei’s 5G SEP patents reached 2,160, far higher than other manufacturers, and the second Nokia. The 5G SEP patent is 1516, the third is ZTE ZTE, and the 1424 SEP patent is very close to Nokia.