Chinese scientists protest against the scientific research environment in the United States. "Poisonous," Nature and Science speak out!

【新智元导读】Recently, many Chinese researchers have been treated unfairly in the United States, and their situation has received much attention. The MIT Principal has a public letter to support Chinese-speaking members. The two top journals, Nature and Science, have also published articles on “strange things” and called for academic equality. When will the academic world's "dark moments" end?

“Academic Equality” is a growing appeal.

Nowadays, the academic world's "strange" is more and more intense:Refusal,CheckedevenExpulsion, it happens repeatedly.

Not long ago, MIT Principal Reif sent an open letter: deeply heartbreaking for the Chinese members, and he called for not creating a harmful atmosphere of unfounded suspicion and fear of academic espionage.

Recently, the two top publications Nature and Science have published articles on this “Monsters”. The article clearly expresses a point of view:Call for academic equality!

In May of this year, when the immunologist Chen Jianzhu, who worked at the Massachusetts Institute of Technology (MIT), returned to the United States from Singapore, a US customs official pulled him aside and asked: “Do you work for a foreign government?”

Chen Jianzhu is a US citizen born in China and has worked at MIT for 25 years. He often travels to and from Asia and has never encountered such problems before. He said: "This is very aggressive,Anyone of Chinese descent will become a suspect.” 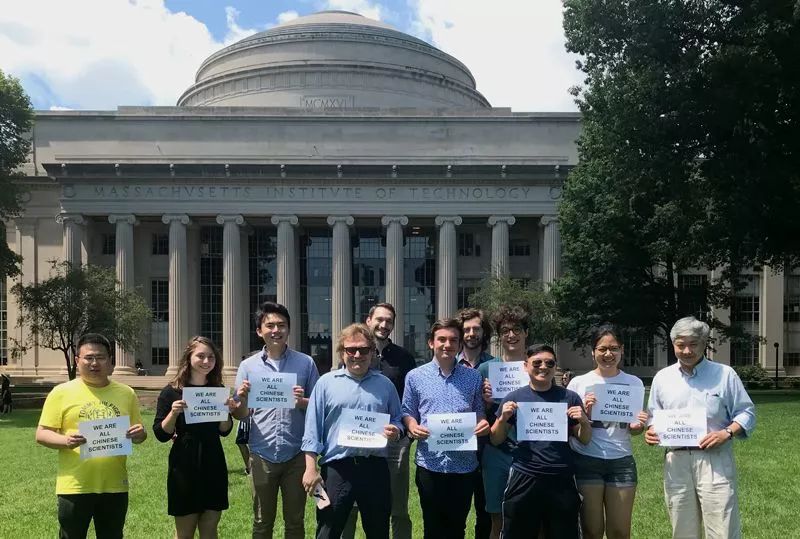 Chen Jianzhu’s experience is not a case. More and more Chinese scientists working in the United States have been treated unfairly.

In response, MIT, the world's top university, has joined other famous universities to support its Chinese scholars.

Last week, MIT Principal Rafael Reif published an open letter to teachers, researchers and students working and studying at MIT about the impact of Sino-US relations on research and education. (See the new wisdom report for details."MIT Principal Yongfa's open letter to the whole school:Heartbreaking for the situation of Chinese members)

Written in the open letter: “We must be very careful not to create a harmful atmosphere of unfounded suspicion and fear.”

However, faculty, postdocs, researchers, and students say they still feel unfairly censored, filthy, and marginalized when dealing with government agencies — because they have Chinese descent.

Government agencies disagreed with their allegations of different treatment of Chinese scientists and stressed that while maintaining scientific integrity and international cooperation, it is necessary to curb the undue influence of foreign countries in universities.

But MIT scientists describe the disturbing experiences of government officials in recent months and say they are changing their behavior to cope with environmental changes on campus and across the country.

Chen Gang, a mechanical engineer at the Massachusetts Institute of Technology, said: “The current atmosphere has caused a lot of psychological fear. Earlier this year, Chen Gang shortened his working hours at Shenzhen Southern University of Science and Technology (he left his job at MIT and had a regular seven-year academic leave) to prevent people from thinking that he might disclose intellectual property or scientific knowledge to Chinese colleagues. .

Environmental changes are the result of pressure from research institutions in various US government agencies, including the FBI and the National Institutes of Health, to prevent foreign countries from stealing valuable intellectual property.

Chinese background scientists —— including US citizens and permanent residents —— is often the focus of government investigations, which has led to accusations that these researchers are being targeted because of their ethnicity.

“As long as there is Chinese relations, any activity is suspicious. & rdquo; MIT physicist Nicholas Fang said: "This isRacial profilingThis is a real problem. ”

“All of this has nothing to do with racial induction,” says Lauer. “These are very specific types of behavior that are related to NIH's ability to make fair and equitable financial decisions. ”

Lauer also mentioned that the university has quietly fired many scientists due to the attack of NIH. He confirmed that since August last year, NIH has sent more than 100 letters to 61 research institutions, saying that these institutions did not disclose foreign funds, and in most (but not all) cases, the researchers are Chinese.

An FBI spokesperson declined to comment on the MIT letter, saying only that the agency could not initiate an investigation based solely on the race, race or nationality of the individual.

Chinese scientists at the Massachusetts Institute of Technology described to Nature magazine the unusual visa application process and the lengthy processing process. It also included incidents of forcible cross-examination by customs officers when entering the United States and sudden visits by law enforcement officers to the campus.

Currently working at Peking University, the former MIT engineering postdoctoral said: "This is really terrible. I feel that it is very unnecessary and wrong to suffer unfair treatment just because I am Chinese." ”

Just last month, the US Department of Energy (DOE) banned employees from participating in talent recruitment programs in China, North Korea, Russia, and Iran. Energy Department spokesperson Kelly Love said: "Our goal is these projects, not these people or It is because of their nationality. ”

“Academic Equality” is a growing appeal

At least 10 other institutions have issued similar statements, including Yale and Stanford, before the MIT Open Letter. Some Chinese-American scientists have also warned that the New York-based non-profit organization Committee of Concerned scientists issued the same warning.

Zhang Shuguang, a protein biochemist at the Massachusetts Institute of Technology's Media Lab, raised concerns with Reif before Reif's open letter, and now he hopes more institutions will stand up and speak.

In the past week, he has contacted the management of more than a dozen universities and societies in the United States and around the world, hoping to establish a unified position against the prejudice against Chinese scientists.

At the same time, Mr. Zhang, a naturalized American citizen who has worked at the Massachusetts Institute of Technology for more than 30 years, said he would completely abandon the US government's funding. He said: "I will get funding from other sources. ”He is worried that other scientists of Chinese descent may leave the country completely..

Second, Science editorial: no member should be the target of attack

This editorial was written by Professor Elias Zerhouni, former Dean of the National Institutes of Health, and emphasized that most of the scientific and economic achievements of the United States are attributed to the work of foreign-born scientists. Members of any group should not be targeted because of their origins. . The United States should not serve short-term security concerns at the expense of long-term national interests.

Elias Zerhouni is an Emeritus Professor at Johns Hopkins University and a former Dean of the National Institutes of Health.

The following is an editorial article by Science:

Many of the scientific achievements and economic achievements of the United States are attributed to the work of foreign-born scientists. Today, a significant proportion of patents and scientific publications in the United States are contributed by scientists from China. But some Americans are increasingly worried that China is unfairly trying to seize intellectual property, trade secrets and advanced technology from the United States, which is not conducive to the long-term relationship between the two sides. As part of the US response to these threats, some Chinese-American lifelong scientists working in leading biomedical research institutions have recently been dismissed for alleged violations of disclosure rules, breach of confidentiality or suspected espionage. As Congress seeks to protect the open and collaborative spirit of science and technology, the scientific community must play a role in the way forward.

We should remember that for many years, US policy makers have been encouraging scientific exchanges and cooperation with China. Over the years, Chinese-born or American-born scientists funded by the federal government have publicly obtained various positions in China without opposition from relevant agencies. These “rules” are now considered to be a serious violation of US ethics and intellectual property laws, but officials of many US agencies were not strictly enforced at the time. Therefore, it is understandable that Chinese Americans in the scientific community feel panic, targeted discrimination and fear.

Science and technology in the United States is the cornerstone of its world's competitiveness and is critical to the safety and protection of this important cornerstone. But unlike most other countries, the United States relies heavily on attracting the world's best and brightest talents to its innovation ecosystem, because science, technology, and engineering are relative to the size and technical strength of the US economy. There are not enough graduates in the field of mathematics. Is it in the national interest to risk losing all or part of the outstanding Chinese-American scientists who have received years of training and support in the United States?

Based on my experience in academia, politics, and industry, most Chinese-born scientists are willing to stay in the United States for personal and family considerations. It is conceivable that China will be happy to return thousands of Chinese American scientists. So what should I do?

Congress is holding a hearing and considering the adoption of the Securing American Science and Technology Act of 2019 as part of the National Defense Authorization Act —— this is a big step forward. Although the bill is progressing in the legislative branch as usual, time is not good for us. Under the auspices of the Office of Science and Technology Policy and the National Security Council, the Administration should establish a team of experts, including safety experts, institutional representatives, academics, and outstanding scientists and engineers, to fully debate the facts, methods, and methods for effectively protecting American science and technology. Measures while maintaining the US's appeal to foreign-born talented scientists, especially scientists from China.

The panel of experts should clearly define new rules for foreign scientific participation; compile risk matrices in the field of science and technology to guide institutions; and direct the Ministry of Commerce and other institutions to implement all import and export control rules and the transfer of substances and information in a manner similar to the dual-use research guide; All relevant parties develop compliance and education programs; and find clear ways to appease the entire Chinese American scientific community.

Members of any group should not be targeted because of their origins.. The United States should not serve short-term security concerns at the expense of long-term national interests, risk losing important intellectual assets, such as creative foreign-born scientists and engineers, and let them be snatched away by global competitors.

As Reif wrote in the letter:

I think we should send a loud and clear signal that American immigrants are vital to how the United States becomes an open, innovative and prosperous country. In such a country, immigration is an oxygen, and every wave of new immigrants is reinjecting energy into the body.