The newly purchased iPhone was officially certified and not authorized for modification. Suning: First return

Mr. Qiu said that the purchase and use of theMobile phoneIn the past two months, there have been no problems, and I have not repaired it myself. How to make a mobile phone become a "refurbishment machine". Mr. Qiu said,SuningE-customer customer service previously insisted that the guarantee of genuine shipment is no problem, he applied for a return refund processing was also rejected.

On July 4th, Suning responded to the news (www.thepaper.cn), saying that the product was verified internally by the company.iPhoneX is in the formal procurement channel of the company, and the distribution link is normal and compliant. Based on the trust of consumers, the company has reached a solution with the consumer to return the refund first.

At present, Mr. Qiu has agreed to the treatment plan for the refund refund.

According to Mr. Qiu, on April 4 this year, he purchased an Apple iPhone X (64GB silver) mobile phone at the price of 5,988 yuan in the official flagship store of TN Shopping Mall in Tmall Mall; on June 5, it was used for two months. After the phone suddenly crashed, it could not be turned on.

On June 10, the return test results showed that “the problem caused by unauthorized modification is not covered by the warranty”. The test report found that the product did not meet the maintenance conditions, did not guarantee, and made a return. 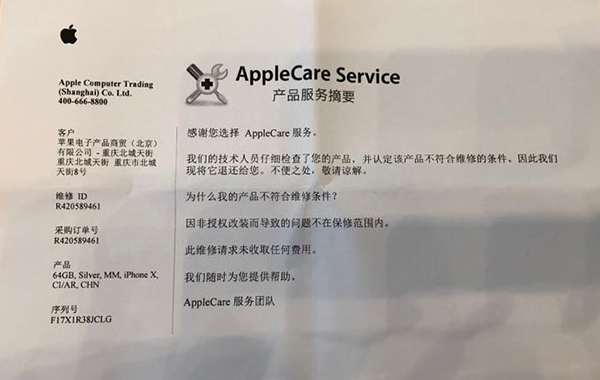 Mr. Qiu said that he asked Suning to prove that the mobile phone was shipped without problems, but the customer service did not respond. In response, Mr. Qiu filled out the appeal form and appealed to Apple.

On June 26, Mr. Qiu received an official phone call from Apple, saying that the result of the complaint came out, that is, Apple retained the test results and handling opinions of the machine for the first time. The machine did not meet the warranty conditions and could only be paid by the consumer. service.

On July 4th, Suning told the news that the first return to the consumer Mr. Qiu returned a refund. Regarding the "non-authorized modification" in the Apple test report, the follow-up will continue to confirm the review of the machine with Apple.

Related news
The newly purchased iPhone was officially certified and not authorized for modification. Suning: First return
Apple iPhone 11 cut prices by 1600 yuan in China
Hot news this week
Wechat has not done this function for N years! Use this app to make up for the defects of wechat
Gree's response to "being disqualified from winning the bid": a mistake made by the bidder in sorting out the materials
IPhone 12: it's more like throwing away the charger
Apple wants to know: what do you do with the charging head of the old iPhone?
Luo Yonghao comments on ideal one: Tesla Model 3 is not a car of a level at all
A 400-brand evacuation Facebook： the internet giant strangled?
How long can "Laoganma" carry on after winning Tencent?
ASUS main board leads Rog day fans Carnival highlights
The dotcom bubble? U.S. technology stocks surpassed their 2000 highs relative to the S & P 500
Tesla's warranty service suddenly shrinks: touch screen and media control unit halved to two years
The most popular news this week
Just two years after the cell phone was used, it crashed? Is there anything fishy behind this
The biggest obstacle for domestic chips is not photolithography: the real weakness is determined
Arm China's 32-bit embedded processor IP "Star" has 7 projects
Sources say the U.S. Department of justice is conducting a criminal investigation into wirecard
Google Chrome browser status_ Access_ Crash due to violation error
LGBTQ community Blue City brothers once soared more than 124% in the market
Without headphones and chargers, the iPhone 12 is even $50 more expensive
Microsoft's free benefits! How to save win10 beautiful lock screen wallpaper
Garmin launches a series of new smart watch products with solar charging
NASA Sherloc will travel to Mars to search for evidence of life