How does Yiyun Music Continue its Social Dream?

But what fans did not expect is that this time NetEase cloud music hit the hot search, but because the product was removed from the shelves.

Since June 29, many audio software, including NetEase Cloud Music, Sol, Himalayas and Litchi, have been taken off the shelves of major Android application stores. On July 2, the above applicationAppleThe store was also removed from the shelves. 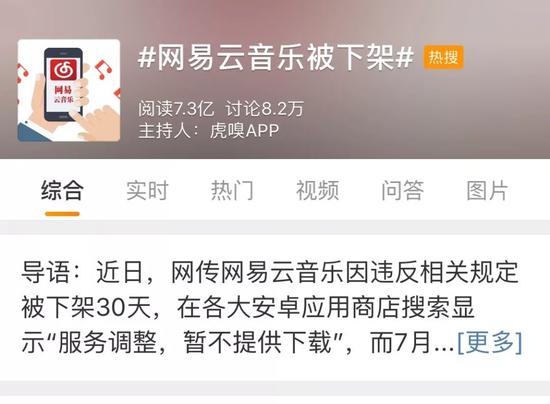 The news spread, the#NetEase Cloud music on the Weibo was hit by#'s topic of hot search. By the time of the issue, the reading volume of relevant topics reached 730 million, and the number of comments was 82,000.

At present, Netease Yun Music Official did not explain the specific reasons why the product was removed from the shelves. But Zhongxin Jingwei noticed that on July 1, the day before NetEase Music was offloaded, NetEase Music launched the "NetEase Music Extreme Edition" in Android App Store.

Netease cloud said that this is to better meet the user's differentiated needs for music products, according to the previous plan in the company.Mobile phoneEnd Explorer is launching a very fast version of App. 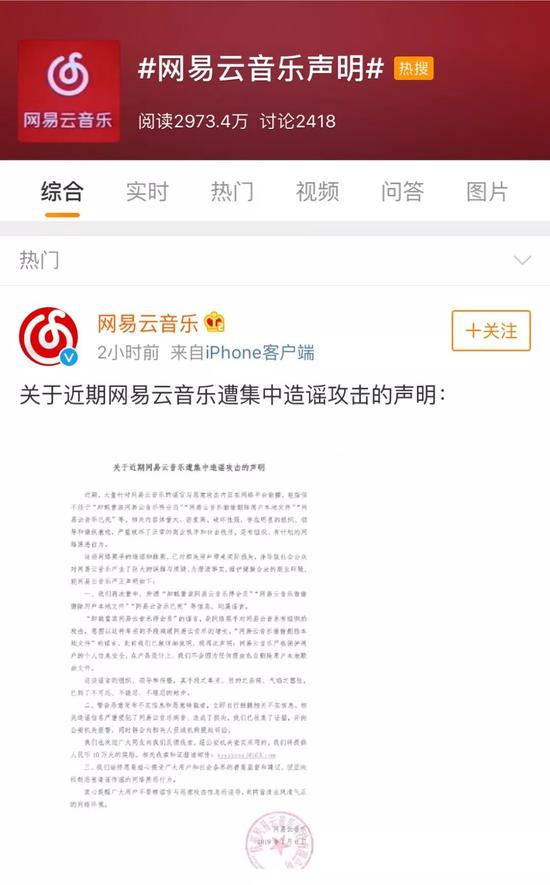 In response, on the evening of July 6, Netease Yun Music responded in Guanwei. Netease Yun Music said that the above-mentioned online news are rumors, is organized and planned network evil behavior. At the same time, NetEase Cloud Music announced that it would provide 100,000 yuan to solicit relevant clues and evidence.

Zhongxin Jingwei noted that Netease Yun Music still did not mention the specific reasons why the products were removed from the shelves in the above response. Many users said to Sino-Singapore Jingwei that it was unexpected to see the news that Netease Cloud Music was offloaded. At present, the use of Netease Cloud Music App installed on mobile phones has not been affected, and local music can also be played normally.

Suddenly get off the shelf, perhaps let Netease cloud music is accelerating the "social experiment" was forced to interrupt.

Ding Lei defines Netease Cloud Music as "Mobile Music Community", which is based on the discovery and sharing of music, and the interaction characterized by user's social interaction. Users customize their music lists, and form their own circle based on the sharing and interaction of song lists.

From a number of old-fashioned listening platform stand out, NetEase cloud music's initial success is closely related to its original "singing mode" to capture a large number of loyal fans. Later, the song commentary area of Netease Cloud Music has become another tool to absorb powder. The UGC content of many ideas and stories about songs in the commentary area has created the community atmosphere of Netease Cloud Music.

Many users of NetEase Music said to Sino-Singapore Jingwei that the content of the commentary area is what they must see before they listen to the song. "If you go there, you can always find comments that will make you happy or feel the same."

But these so-called social elements are still at a relatively early stage. NetEase Yun Music's first real social attempt was to synchronize its chat function with strangers in its 2008 listening report, but this function did not spark too much water.

Subsequently, Netease Yun Music launched a small program to make friends with music, in order to listen to music and taste with users to match the opposite sex.

Just last June, Netease Cloud Music opened a new attempt to socialize in a low-key way -- "Cloud Village Community". After opening the function of "Yuncun Community", its form of expression can be summarized as "the dynamic circle of friends around music, and even the interface of making friends with the city". In addition, it will also select the daily songs comment area's hot reviews and make a hot comment wall on the top of the Yuncun page.

In addition, in order to strengthen the social attributes, Netease Cloud Music has also introduced LOOK live broadcasting and other functions.

However, due to the short online time and part of the functions are in the stage of internal testing, users do not have a strong sense of change.

Old users of Netease, who have already experienced the functions of Yuncun and Dating Apps, have also made different voices. A serious user of Netease Cloud Music complained to Sino-Singapore Jingwei that a good music App had been transformed into "black smoke". "Once I accidentally went into the live studio of Netease Yun Music. A female anchorwoman who sang out of tune twisted and twisted on the screen. I was scared to back out." The user said.

However, some users said that it is necessary for cloud music to make social transformation. Many loyal fans listen to music in order to find a sustenance. They have the need to express and communicate.

The "martyrdom" of copyright

During the discussion on the topic of "Netease Cloud Music is Off the shelf", some users wrote on Weibo that they thought Netease Cloud (Music) was doing well, that is, there was a lack of copyright and many songs could not be heard.

Copyright has become a problem Netease has to face. According to media reports, some people in the industry said that in 2018, NetEase Yun Music ranked fourth in the industry from the champion, the root cause is that it did not continue to buy the copyright of Jay Chou's songs, resulting in the loss of users to other platforms with copyright.

In recent years, the state, industry and other levels pay more attention to copyright issues. Competition for music copyright in online music market has reached a white-hot stage. Many online music platforms have thrown heavy money for monopolizing copyright.

On May 16, Netease held its first quarter earnings conference by telephone. Ding Lei, speaking about the cost of music copyright, said: "Some companies control the market, and the rental cost of copyright is raised very high every year, which has had some negative effects on the development of online music in China as a whole." But up to now, copyright is still a mystery to Netease's cloud music.

Previously, in February 2018, Tencent Music and NetEase Yun Music swapped 99% of the music copyright, which is considered to greatly ease the copyright problems of the music platform. However, in the case of audio market demand focusing on head songs and singers, the copyright anxiety of Netease cloud music and users'needs are still not solved from the actual effect.

"Copyright is still the most embarrassing problem Netease Yun Music is facing." A creative singer of Yiyun Music on the Internet said to Sino-Singapore Jingwei that music resources are the basis for the platform to retain users. Resources directly determine the stickiness of users. It is also the most important factor for the survival and development of this kind of App. Users choose the platform first for the song resources, and then expand other interests.