Master Lu's list of mobile phone fluency in the first half of 2019: EMUI 9.1 helped Huawei to win the P30 Championship

Master Lu fluency test is a light load test, mainly simulating daily use behaviors, such as file copying, webpage sliding, etc. The test is the response capability of the mobile phone system, which has no absolute relationship with the performance test, and more is to look at the optimization ability of the system. 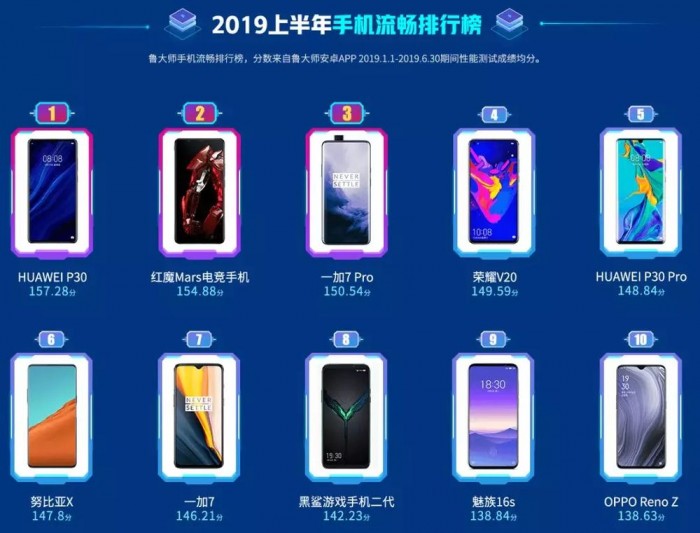 In the first half of 2019, most of the models on the mobile phone fluency list were the Snapdragon 855 and the Kirin 980 flagship. They all have a common feature and are equipped with their latest systems.

First placeHuaweiThe EMUI 9.1 launched in the P30 series has been reworked and improved from the UI design to the bottom of the system. It also incorporates self-developed black technology such as GPU Turbo 3.0, EROFS file system and Ark compiler, which is much more powerful than EMUI 9.0.

The other two models with a score of more than 150 are Red Devils 3 andOne plus7 Pro, Red Devil 3 runs the Red Magic OS, a mobile phone system specially created for games. It has more than 100 adaptations and optimizations for the game. The One Plus 7 Pro is equipped with the new H2OS, which is specially optimized for the 90Hz refresh rate fluid screen. 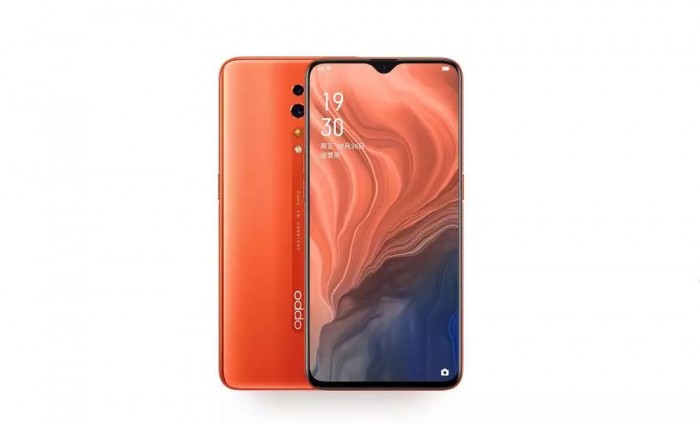 It is worth mentioning that it is equipped with MediaTek P90 chip.OPPOReno Z is also on the list. OPPO Reno Z runs Color OS6.0 system and has a new upgrade to HyperBoost technology. Officially, HyperBoost is a system-level optimization solution independently developed by OPPO that spans the middleware and kernel layers. System running speed, APP opening speed.

The mobile phone UI list data is derived from the multiple models of the same UI. Among them, the hydrogen OS of one plus mobile phone became the highest average system, and the black shark JOY UI ranked second.

Since the mobile phone UI ranking data is derived from the equalization of all models under the same brand, the brands with fewer models are generally higher. 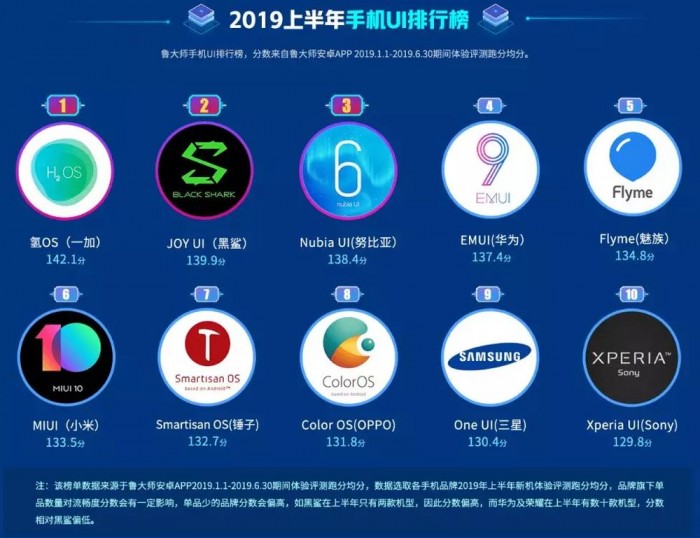 Take a hydrogenation OS as an example. Only one mobile phone is launched in one year, and both are flagships. There is no medium- and low-end model. Therefore, the hydrogen OS has the highest score, and the black shark, hammer and other brand models are also relatively small. rank the top. Huawei,MilletOV, etc., more than hundreds of models of its models, covering entry, mid-end and other fluent models are not high, the average score will be pulled down, leading to lower rankings.

Hongmeng system or listed this year

This year's most concerned is undoubtedly Huawei's self-developed operating system - Hongmeng system. Yu Chengdong once said that the Hongmeng system will be released as soon as possible in the second half of this year, at the beginning of next year. At the same time, a number of mobile phone companies have been exposed to Huawei and began to test the Hongmeng system. Huawei said that the Ark compiler will be officially open source in August this year, inviting the majority of application developers to build a terminal ecosystem, which seems to be preparing for the Hongmeng operating system to market.

Prior to this, Ali and Meizu jointly launched the Yun OS system, which quickly declined due to poor compatibility. If Hongmeng system can be listed in the second half of this year, how it performs, whether it can compete with Android and iOS, will be the focus of the entire technology circle.

In addition, Google has released the Android 10.0 system, which has improved UI and underlying optimization, adding black mode, voice recognition technology, support for folding screen mobile phones and 5G network. One plus, Xiaomi, Huawei, etc. announced the first batch of models supporting Android 10.0. In the second half of this year, the UI based on Android 10.0 will gradually replace the current UI based on Android 9.0, and the fluency can reach new heights. The new machine is on the market.

Related news
Master Lu's list of mobile phone fluency in the first half of 2019: EMUI 9.1 helped Huawei to win the P30 Championship
Huawei mate 30 / P30 series opens emui 10.1 public test: covering 7 models
Hot news this week
Wechat has not done this function for N years! Use this app to make up for the defects of wechat
Gree's response to "being disqualified from winning the bid": a mistake made by the bidder in sorting out the materials
IPhone 12: it's more like throwing away the charger
Apple wants to know: what do you do with the charging head of the old iPhone?
Luo Yonghao comments on ideal one: Tesla Model 3 is not a car of a level at all
A 400-brand evacuation Facebook： the internet giant strangled?
How long can "Laoganma" carry on after winning Tencent?
ASUS main board leads Rog day fans Carnival highlights
The dotcom bubble? U.S. technology stocks surpassed their 2000 highs relative to the S & P 500
Tesla's warranty service suddenly shrinks: touch screen and media control unit halved to two years
The most popular news this week
Android camp first! Samsung considers not to send charger to mobile phone next year
Apple is confident in its own PC card honey: performance comparable to AMD / NVIDIA GPU
Cut off the charger and headphones? Apple dares, Android manufacturers may not dare
NASA says Boeing has to address 80 issues related to the starplane
Blizzard publishes a lot of information about world of Warcraft: Shadow country: beta test next week
Musk thanked the Chinese team: he was closer to the second batch of $1.8 billion options
Microsoft's new proposal: fix Chrome's notification reliability on Windows 10 (Figure)
After Microsoft shut down mixer, ninja, the Internet game anchor, began to broadcast live on YouTube
Microsoft Teams Online Together Mode: Video Chat in Shared Virtual Background
Game developers can now use Project xCloud remote access Xbox development suite