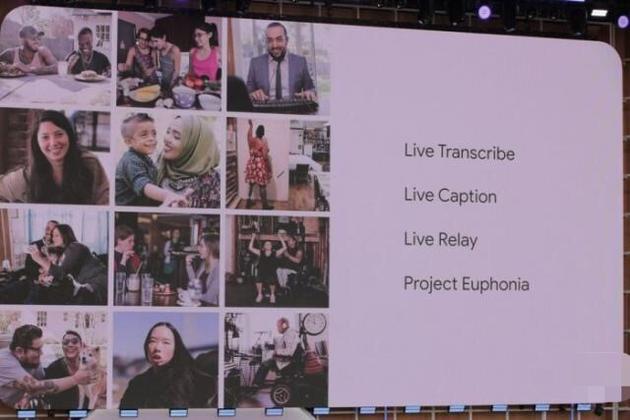 According to Sagar Savla, there are currently 466 million people worldwide suffering from deafness or hearing impairment, a figure that could increase to 900 million in 2055. Hearing impairment makes it difficult for people to communicate with the world around them. This is a serious challenge in human society.

The emergence of the speech recognition function Live Transcribe is to solve the real problem for the hearing impaired. This feature automatically transcribes conversations in real time, allowing people to participate in conversations that would otherwise be inaccessible.

In addition, patients with speech disorders are also a larger group. In an interview with Sina Technology, Google AI product manager Julie Cattiau mentioned that Google’s Euphonia project, launched this year, is recruiting volunteers to accumulate a larger database of people with disabilities, hoping to eventually help all speech-disabled patients to communicate.

It is reported that this function enables the machine to understand the way they talk by establishing a speech recognition model for speech impaired patients and a computer vision-based model that can recognize other communication methods (such as gestures, blinks, etc.), and help these patients with AI speech technology. "Talk to communicate."

At the event, Julie Cattiau showed through a video that the function can be used to read the expression of people with language disabilities relatively accurately.

However, there are certain challenges in getting AI to understand the expression of patients with speech disorders. Julie Cattiau said in an interview that there is already a large amount of data in general language recognition, and many people are using this platform. However, in the project of Euphonia, there are not many people involved, and many people with language barriers are rarely willing to participate. Currently, a number of volunteers who are speech impaired are recruited to read a few words and accumulate expressions so that they can build some data.

"These numbers are actually not that much. Although we have made great progress in speech recognition, there are still such challenges," Julie Cattiau said frankly.

Speech recognition is a vital technology for people with certain health conditions, but many products perform even when they are optimal.

It is understood that by working with these non-profit organizations, the Euphonia project team needs to record more patient voices and then use these sounds to train artificial intelligence to create algorithms and spectrograms that recognize these voices.

At present, speech recognition technology may not be suitable for people with language barriers because no one has collected enough data sets, and this will be part of Euphonia's research.