What did Baidu do on the Internet?

However, the seemingly sincere expression was later rejected by the media as not written by Zhang Zixin's father himself. Think of it as well, based on human nature, no one is willing to face the death of their closest relatives, let alone struggle to find a daughter for many days. When the police did not make the final identification results, the father would certainly seize the last straw, hoping for a miracle. It can be imagined that Zhang Zixin's father would not "announce" his daughter's death in this way. 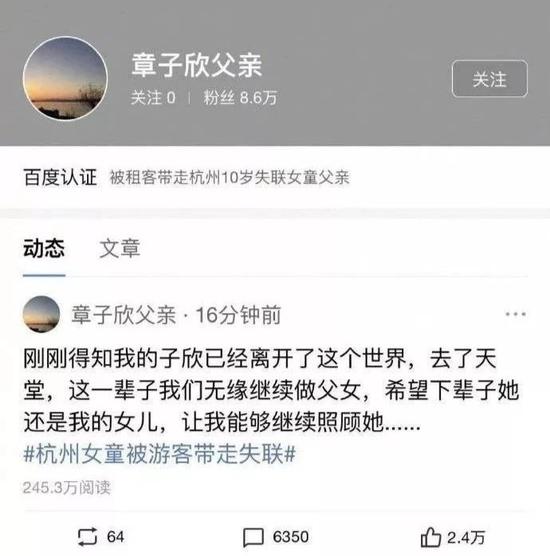 For such a dynamic, Baidu responded twice. In summary, the account is true, but the content is "when the editor on duty has not received confirmation from Zhang Fu, he issued a dynamic message", that is to say, Baidu admitted to publishing false information. At a time when the facts were not clear, Baidu even released the message of "mourning" for the girl's father without authorization, which really broke through the bottom line of everyone's value. So anxious to rush out information, apparently just to grab traffic, said that Baidu at this time in the blood steamed bread, not too much.

Without confirmation, Baidu released information for Zhang Zixin, meaning that when the girl's body was recovered, Baidu immediately contacted Zhang Zixin's father and wanted him to issue a "mourning" for his daughter's death. Regardless of how other individuals judge whether Xiao Zixin has passed away, as a giant in the Internet industry, as a platform for information dissemination, is this the bottom line and integrity of the enterprise? Journalists should also follow a journalistic ethics in their interviews.

Faced with its own mistakes and fierce criticism from netizens, Baidu once again staged a familiar routine, Baidu immediately dismissed the editors in charge, and at the same time, it will comprehensively resume Baidu's news management mechanism. What is the difference between dismissing temporary workers and civilians? Even if there are mistakes in the editing, as a well-known Internet company, it should have a standardized system to stop mistakes in time. We should not attempt to throw off editors, but transfer the neglect of the enterprise system.

And the comprehensive management mechanism, such polite words clearly do not see any sincerity, how can an information release platform without complete management specifications? After the Weizexi Incident, Baidu repeatedly appeared false and false information in its products. It can be seen that this is probably a problem of non-management mechanism. Corporate values are the main reason.

The core value of an enterprise determines the direction of its development, and the management mechanism is only a tool to assist the core value of an enterprise. Repeated false information has shown that the root problem of Baidu is the issue of values. In the age of self-media, the fierce competition in the market makes flow as the king the core pursuit, but to be quick, we must also follow the ethics. Enterprises are always serving people. If the enterprise value is contrary to the social ethics, we must choose to respect ethics and product objects, so as to avoid causing secondary harm.

The Internet has a memory. Every public can see what enterprises do. If they persist in cold-blooded, the power of market obsolescence will show its consequences.

Baidu's response to "Zhang Zixin's father sent a fake article" was that the editor sent the message without confirmation.

A series of operations in Baidu have caused the angry users: what's your problem