Responding to the "Break of Confidence" of American Software Enterprises: Disappointed

In the statement sent to the Observer Network, Dajiang said that it has always attached great importance to information security issues. "The security of our technology has been repeatedly verified globally, including independent verification by the US government and leading US companies."

“When users use DJI UAVs or other technical products, the data produced, stored and transmitted is completely controlled by the users,” Dajiang expressed disappointment with CAPE’s decision based on the wrong information.“But this will not affect Dajiang’s continued global development of customers and partnerships. More than 520 public safety agencies around the world trust and use DJI’s drone products to perform mission-critical tasks.”

Dajiang also pointed out that CAPE is one of the many developers who use the DJI SDK. CAPE provides data management to customers using drones.cloud servicePlatform, an enterprise software vendor.Dajiang does not know whether CAPE intends to change the services of existing customers. Dajiang believes that this is a negotiation between CAPE and its customers.

Earlier, foreign media reported on July 17, the startup company CAPE, based in Redwood City, California, plans to inform customers on the 17th that it will stop selling software compatible with Chinese drones to its customers. Most of the drones currently used in the United States are manufactured by DJI. 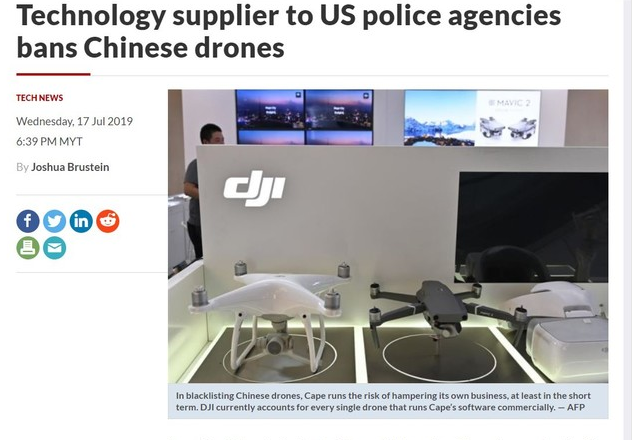 CAPE began requiring new customers to choose from a list of approved manufacturers, and there is currently only one option in the list: Skydio Inc. The startup is one mile from CAPE's Silicon Valley headquarters and has recently started working with the Department of Defense. CAPE will allow existing customers to use their DJI drone until the end of the contract, which lasts no more than one year.

The report said thatThe encounter between Dajiang and China Telecom Equipment CorporationHuaweiTechnology Co., Ltd. echoes,The Trump administration has been using it as a national security threat for several months, using these concerns to limit its entry into the US market.

In the National Defense Authorization Act (NDAA) passed by the US Senate at the end of June,Chinese drones are prohibited from being used for US military purposes. US lawmakers say Chinese drones may send information to the Chinese government or be exploited by hackers to conduct cyber attacks or other types of attacks..

In a letter sent by Dajiang to the Senate Subcommittee last month, it denied allegations that it sent video clips abroad, saying that DajiangCustomized drones without Internet capabilities have been created for US government projects.

In addition, Dajiang also announced on July 9 that its security solution was approved by the US Department of the Interior. In the latter part of the test, the two UAV models of Dajiang were used.

The US Department of the Interior mentioned this in a report released on July 2. The department conducted a total of 1,245 (total 538 hours) test flights on two UAVs in DJI.No “data leakage” was found during the period and the drone worked well.

Mario Rebello, vice president of North America's business department at the time, also said, "The US Department of the Interior believes that DJI's product software and hardware solutions can meet customer requirements for data security and will be approved. For this solution, We are grateful for the approval. This solution allows rescuers to save lives more effectively in the event of an emergency."

This month, the US Department of the Interior also released a report on the analysis of UAVs used by the government. The agency recommends approval of DJI products, but it is recommended to limit its use to non-sensitive tasks involving data that can be safely disclosed. One reason for the department's approval of Dajiang is the lack of any viable domestic alternatives.

Related news
VMware intends to acquire Pivotal Software
Amd users can now download the radeon software through the Microsoft Store (Figure)
News Break！ Shen Xiangyang invests and serves as the chairman of "today's headlines" of the US Edition
Hot news this week
Wechat has not done this function for N years! Use this app to make up for the defects of wechat
Gree's response to "being disqualified from winning the bid": a mistake made by the bidder in sorting out the materials
Apple wants to know: what do you do with the charging head of the old iPhone?
IPhone 12: it's more like throwing away the charger
ASUS main board leads Rog day fans Carnival highlights
Luo Yonghao comments on ideal one: Tesla Model 3 is not a car of a level at all
A 400-brand evacuation Facebook： the internet giant strangled?
The dotcom bubble? U.S. technology stocks surpassed their 2000 highs relative to the S & P 500
Tesla's warranty service suddenly shrinks: touch screen and media control unit halved to two years
Samsung and research team found a new semiconductor material: amorphous boron nitride (a-bn)
The most popular news this week
NVIDIA 451.67 video card driver release: fixing 23 bugs, saving 144hz HDMI display
Epic plus three: free 3 games and torch light 2 next week
How difficult is it for Tesla Model 3 owners to protect their rights when they speed up to crash into the muck and FSD is suspected to be reduced?
Tian Suning talks to Intel's former CTO: where is 5g's "killer app"?
Trojan program with the help of game download station again spread cloud control malicious module
China's first Ku band high-throughput broadband commercial communication satellite "Asia Pacific 6D" launched successfully
European Supreme Court: YouTube does not need to submit user information for publishing pirated films
NVIDIA surpasses Intel for the first time! A victory for fabless and AI
Duty free iPhones are delicious, but you should also pay attention to these "holes"
Google launches open usage commons IBM has objection to trademark transfer