Hongkong edition "Alipay" AlipayHK will be extended to the whole country with the permission of the central bank. 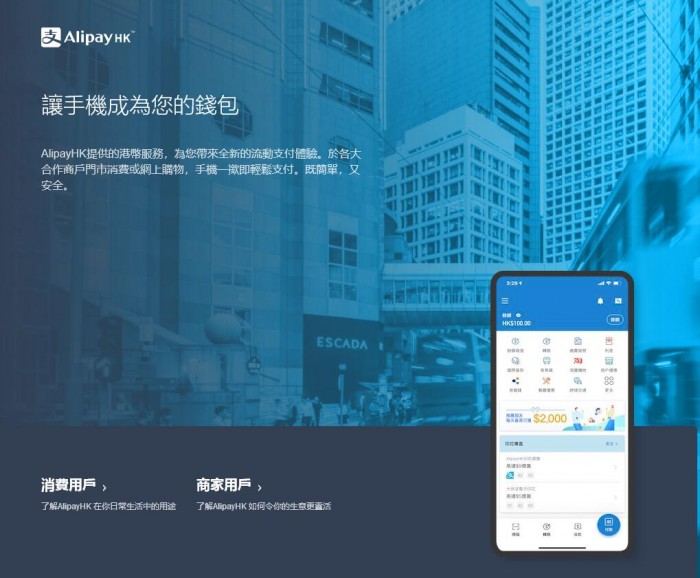 Statistics show that in August 2016, the Hongkong Monetary Authority issued the third party payment license, and Alipay Hongkong became the first batch of payment licences. In May 24, 2017, the Alipay Hongkong version of the electronic wallet "Alipay HK" was launched. After the on-line version of Alipay is launched, all Hongkong residents can pay directly by using Hong Kong dollar by binding Alipay's local bank credit card or recharge to use Alipay.

Related news
Hongkong edition "Alipay" AlipayHK will be extended to the whole country with the permission of the central bank.
Alipay wins top KDD CUP 2019 in AI data mining
Create Android 10 Go Edition release for entry-level mobile phones
Huawei P40 Pro Premium Edition exposure: stronger than P40 Pro
Hot news this week
Wechat has not done this function for N years! Use this app to make up for the defects of wechat
Gree's response to "being disqualified from winning the bid": a mistake made by the bidder in sorting out the materials
IPhone 12: it's more like throwing away the charger
Apple wants to know: what do you do with the charging head of the old iPhone?
Luo Yonghao comments on ideal one: Tesla Model 3 is not a car of a level at all
A 400-brand evacuation Facebook： the internet giant strangled?
How long can "Laoganma" carry on after winning Tencent?
ASUS main board leads Rog day fans Carnival highlights
The dotcom bubble? U.S. technology stocks surpassed their 2000 highs relative to the S & P 500
Tesla's warranty service suddenly shrinks: touch screen and media control unit halved to two years
The most popular news this week
Rest assured: Apple confirms arm Mac will still support thunderbolt interface
89 mobile phone applications banned by Indian Army
Tech stocks are gaining ground: former Microsoft CEO、 Google co-founders have seen their fortunes soa
IPhone 12 price exposure: will the price of iPhone 12 increase by $50 without headset and charger?
Google is pouring more information from the knowledge map into image search
NVIDIA market capitalization surpassed Intel： for the first time as North America's largest chipmake
Facebook removed accounts associated with Republican agent Roger stone
Google says the official version of Android 11 is due to be released on September 8
LG display may postpone pozhou 10.5 generation OLED production line indefinitely
Just two years after the cell phone was used, it crashed? Is there anything fishy behind this