The Chinese team's international Olympic number is again dominant. The full score is guaranteed to be sent to Tsinghua Yaoban. The "China Second Team" is tied for first place. 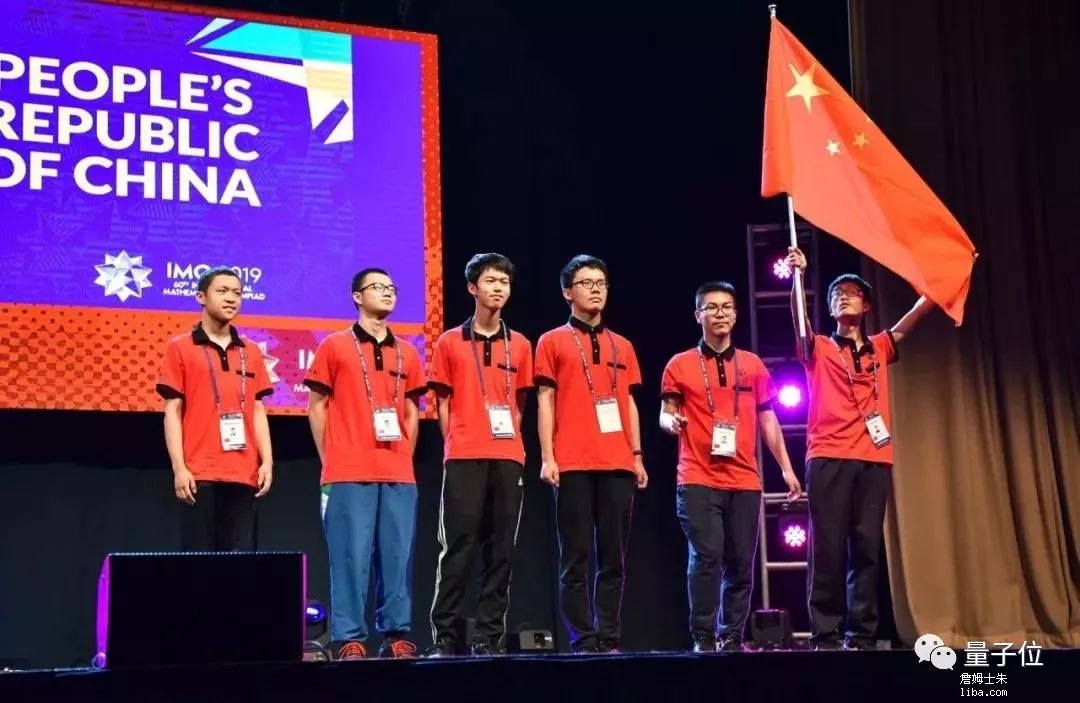 Xiaocha, chestnuts, from the concave temple

After the 16th and 17th days of competition, the 60th International Mathematical Olympiad (IMO 2019) held in Bath, England, finally came to an end.China and the United States tied for first place with 227 pointsThe South Korean team ranked third with a point difference.

This is also the second time that China has won the team championship after 2014. 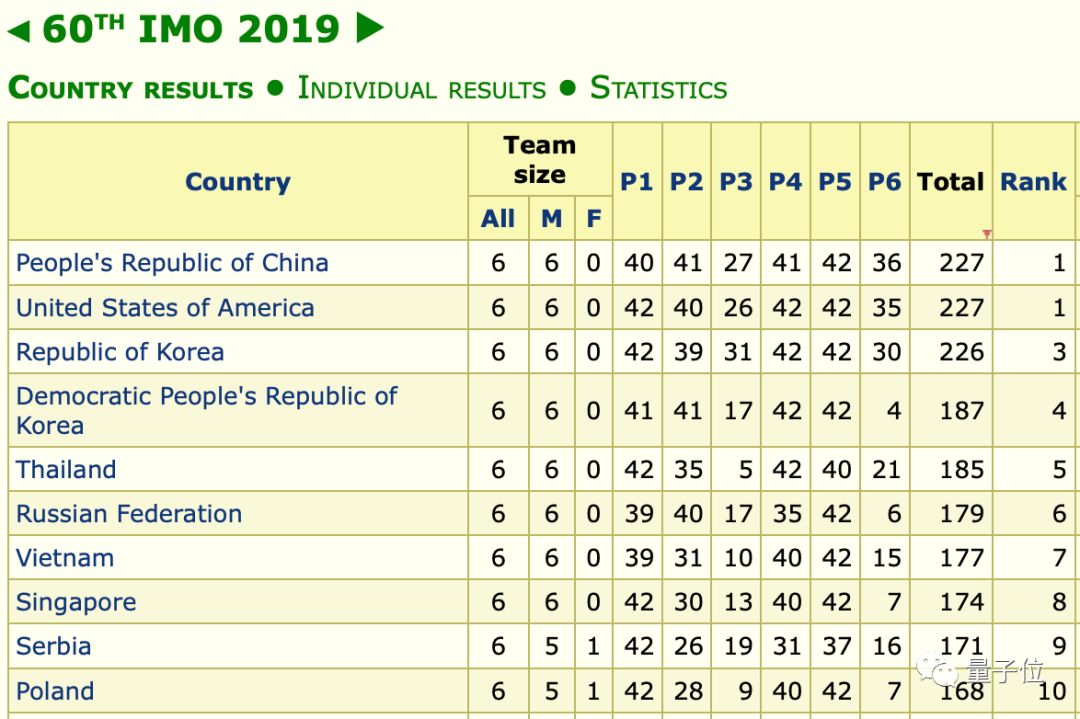 The IMO competition is divided into 2 consecutive days. The challenge is given to 3 players each day. The difficulty is increased in sequence, and the answer time is 4.5 hours. A total of 6 questions and 7 points each, with a score of 42 points. 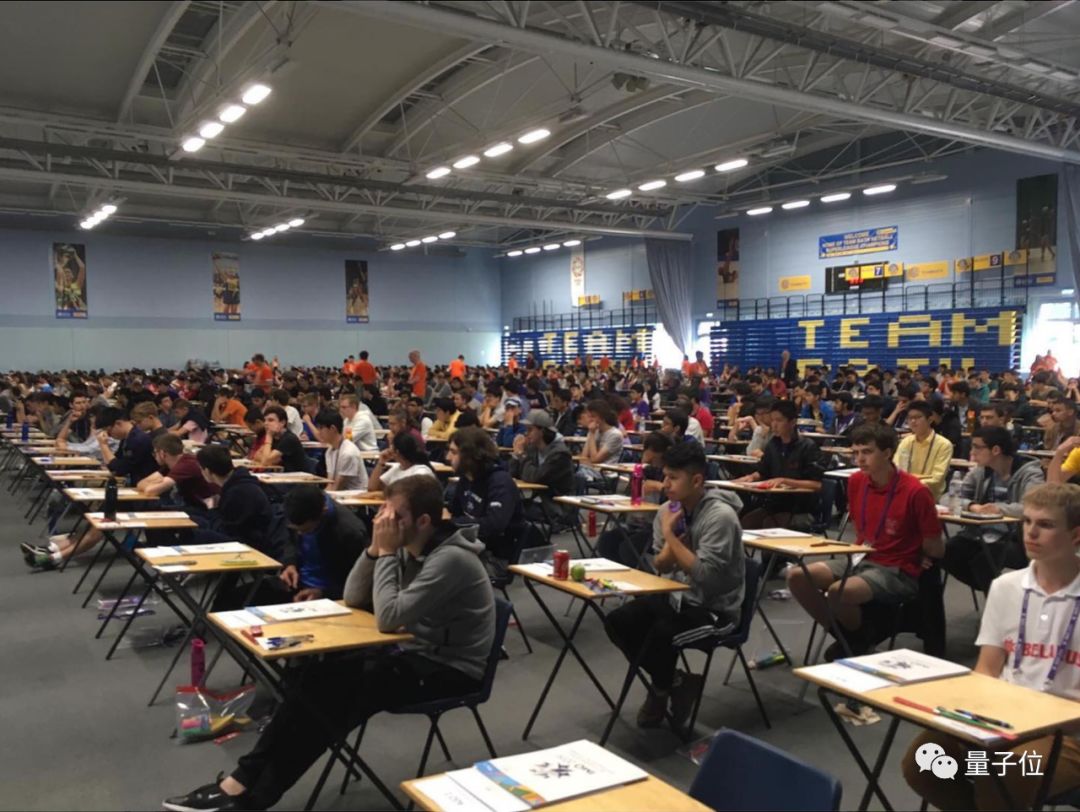 The scores of the six Chinese contestants are as follows:

Among them, Yuan Zhen from WISCO No. 3 and Xie Baiting from Yueqing Zhilin Middle School all received full marks. According to the relevant regulations of the Ministry of Education, the players of the International Olympic Games national team can be guaranteed, and Yuan Hao has already been confirmed to be sent to Tsinghua Yao Ban.

The International Mathematical Olympiad is one of the most prestigious math competitions in the world.

Since 1985, the Chinese team has maintained excellent results and won 157 gold medals, 35 silver medals and 6 bronze medals, including 20 team championships this year.

In addition to China, the United States and Russia are also traditionally strong teams. All three teams have had a record of winning the championship for four consecutive years. 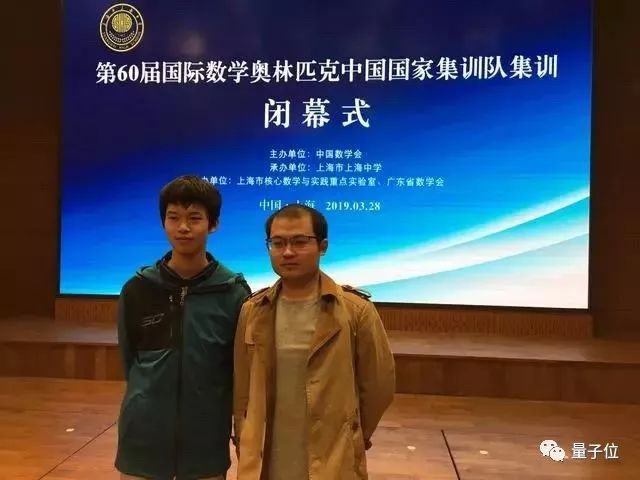 Full score playerYuan WeiFrom the third middle school of WISCO, he is currently in the second year of high school and has been qualified by Tsinghua Yao Banbao. As early as the third grade of elementary school, he began to contact the Olympics. He had achieved good results in various competitions such as the Hope Cup and the Hualuo Geng Cup.

Moreover, Yuan Zhen was admitted in advance by WISCO No. 3 Middle School. As early as the first two summers, he studied and participated in the training with Gao’s brothers and sisters. Gao Yi won the silver medal for the first time to participate in the Chinese Olympics.

When talking about his own Olympic experience, Yuan Wei said:

Speaking of my competition experience, it is relatively smooth. Gao Yi, CMO Silver, Peking University Flying Sign, got a contract to drop a line. The second year of high school, that is, this year, once again selected for the provincial team, the CMO score is not bad, the second place in the country, entered the national collection, has now obtained the qualification of Tsinghua Yao Ban. 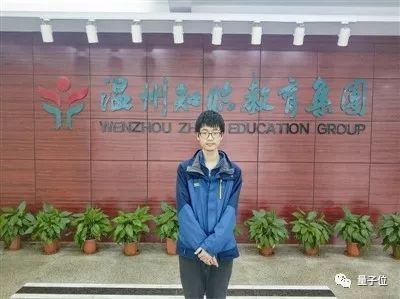 Xie Baiting, another full score player. He is from Yueqing, Zhejiang Province. He is a high school student in Zhilin Middle School. He also sent to Tsinghua University because he was selected for the national team. He will be enrolled in September this year.

As early as 2016, he won the first prize in the National High School Mathematics League. In this way, Xie Baiting of Gao Yi will get Tsinghua & ldquo; pre-admission & quot; quota, more than one line of college entrance examination is enough.

In addition, as a player with excellent results in the National League, he was qualified to participate in the China Mathematical Olympiad (CMO).

Thus, Xie Baiting participated in the 2018 CMO and won the gold medal. After that, he stood out from the 60 outstanding players of the CMO and entered the IMO training team.

The "Zhejiang News" reported that even if it was already Tsinghua "pre-admission", Xie Baiting was at the end of the high school term, the total score is still the top three in the grade, not only a mathematics. In addition, he is a teenager who is good at telling jokes.

Another one that received widespread attention before the gameDeng MingyangIt is also a genius boy. 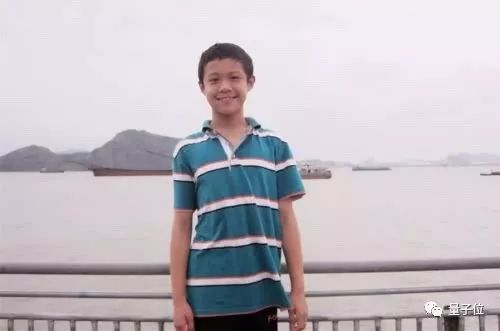 In 2018, Deng Mingyang of the High School affiliated to the National People's Congress won the CMO gold medal in the first year of high school. It is quite difficult for Gao Yi to win a gold medal. Last year, only 1% of high school students won gold medals. Of these outstanding players, only 6 will eventually participate in the international Olympics for the coming year. 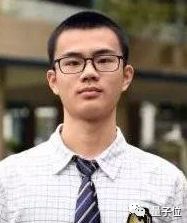 Hu Sulin, from Guangzhou, is a sophomore student in the middle school affiliated to South China Normal University.

As the only representative of South China's national team this year, he lost only three points in the IMO competition.

Hu Sulin said that he has not done many questions. But this is a very young boy who will develop some interesting properties and name the nature. He also wrote 11 pages of “Research Results” for a piece of geometry.

However, Hu Sulin not only plays Olympiad, he is also the 4× of the school sports; the 400 relay champion, and the flag bearer of the school flag class.

In addition, from a message given to him by a high school teacher, Hu Sulin is likely to have been admitted to Peking University in advance.

Yu Ranfeng, from the secondary school affiliated to Nanjing Normal University, is attending the second year of high school. Has been sent to Peking University.

From small to large, Yu Ranfeng is a small math prince. In 2016, he had won the first prize in the National High School Mathematics League and entered the provincial team.

In 2017, Yu Ranfeng was promoted to the Nanshi High School as a science and technology student.

In 2018, during the high school period, he entered the Olympic team and was one of the two selected in Jiangsu Province. 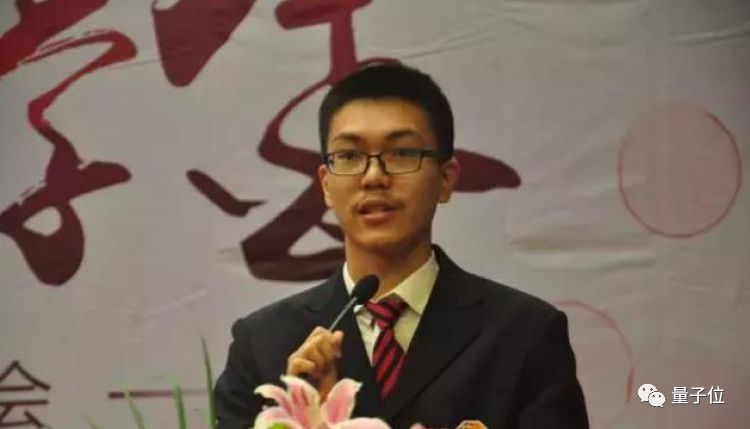 In 2018, when he won the first prize in the National High School Mathematics League, he was also a junior high school student. In the autumn of the same year, he was promoted to high school.

In addition to the Olympiad, Huang Jiajun also gained a lot in the physics and chemistry competition.

Unlike the Romanian Mathematical Competition (RMM), which was reported by our qubits last year, the reason why this IMO received such attention was not because it was too difficult, but because of the identity of the players.

Take a look at the photos of several participating teams this year: 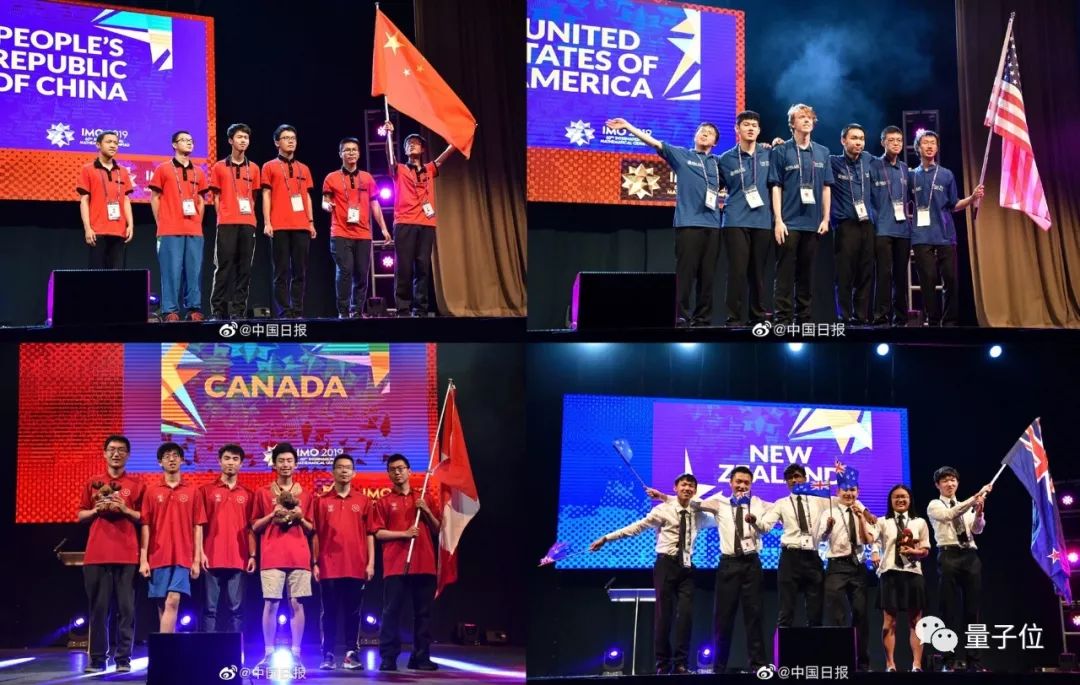 If you don't look at the national flag, can you tell if it is the representative team of that country?

The above four teams are China, the United States, Canada, and New Zealand, and they are almost all Chinese. Some netizens said that the last time they saw the Chinese fighter screen was table tennis.

Check out the official website of IMO 2019 and you will find: Vincent · Huang, Daniel · Zhu and other players' names come into view.

Only one of the most promising Chinese and American teams is white, even the head coach of the US Olympic team.Luo BoshenIt is also a Chinese, and he even interacts with Chinese netizens on Weibo.

It is no wonder that this year's IMO was dubbed by the netizens as the contest between the Chinese team and the "two teams".

The International Mathematical Olympiad (IMO) has reached the 60th this year. It was released in 1980 due to the host country, and the rest is held every year.

Topics are divided into geometry, number theory, algebra, and combination. The purpose of IMO's problem is not to exceed the scope of middle school mathematics. In fact, it is to ensure that the problem can be understood by middle school students. As for the method of solving problems, it is of course not advocating the use of university knowledge such as calculus.

Even if you can understand each word in the title, you can even read the questions. But if you solve the problem, you may not be able to write even one word.

This year's topic is this:

Because the title is difficult, the time left for the contestants is also very long. The IMO event is held in 2 days, with 3 questions per day, 7 points each, with a score of 42 points. Participants have 4.5 hours a day to answer 3 questions.

The difficulty of the topic is from easy to difficult from front to back. Medals are awarded in the following order: 1/12 of the former entrants wins the gold medal, then 2/12 gets the silver medal, and then 3/12 gets the bronze medal. If the medal is not obtained, but the contestant who answers the full score on a certain question can win the honorary prize.

A score of 7 in one of the questions will receive an honorary prize.

If you are interested in doing this year's exam questions, reply to the qubit public number.“Olympic number”Get the title of the game and see the difference between you and Xueba.

Recall that in February of this year, at the Romanian Masters of Mathematics (RMM), the Chinese team's six players had no gold medal, and their highest ranking was 15th; the team's total score was ranked 6th, behind the United States, South Korea, Serbia, Israel and Russia. 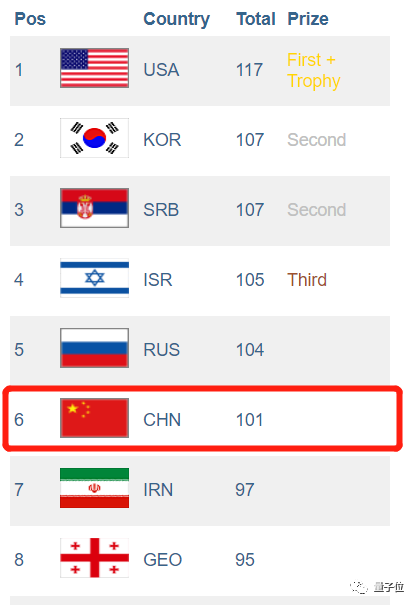 At that time, the Chinese team was almost completely annihilated in the 3rd graph theory. Except for one player who scored 1 point (7 points total), all the other players scored zero. So it was opened up by other countries.

After the game, many netizens expressed dissatisfaction with the “death” and even attributed the loss to the policy of the Ministry of Education to cancel the Olympic Games and the entrance to higher education.

In the past five months, domestic high school students have reaffirmed their strength in international competitions. I don't know what everyone will look at?

Related news
Brushing and shaking hands on the 43-inch vertical TV experience? Samsung launches The Sero TV (picture)
Hot news this week
Wechat has not done this function for N years! Use this app to make up for the defects of wechat
Gree's response to "being disqualified from winning the bid": a mistake made by the bidder in sorting out the materials
IPhone 12: it's more like throwing away the charger
Apple wants to know: what do you do with the charging head of the old iPhone?
Microsoft official free data recovery tool windows file recovery experience
Amazon cancels disposable plastic products in India
Luo Yonghao comments on ideal one: Tesla Model 3 is not a car of a level at all
Tencent magic change Yang surpasses video self mockery: I'm a simple and honest fake spicy sauce lost 16 million
A 400-brand evacuation Facebook： the internet giant strangled?
How long can "Laoganma" carry on after winning Tencent?
The most popular news this week
Share the first share of power bank: small power rush to gem, Tencent shares nearly 10%
Baidu Linyuan leaps: great strategic determination is needed to adhere to the core technology innovation in the end
Cellon 865 Plus 120Hz millet 10 super cup fast: price straight to 6000 yuan file?
Americans try to disinfect borrowed books with microwave, and the library posts for mercy
Samsung and research team found a new semiconductor material: amorphous boron nitride (a-bn)
Operation of the mystery: the Internet Archive is regarded as the CDN of JS file by the Bank of Barclays
Another delisting from the US? Sina CEO Cao Guowei's privatization proposal received
2000 cheaper! Qiong version of iPhone is popular
Chinese manufacturers dominate 5g telecom equipment: Huawei / ZTE takes 48.9% share
According to the news, Samsung's next generation of foldable mobile phones is named Galaxy Z fold 2