Apple Music's free trial period will be changed to one month 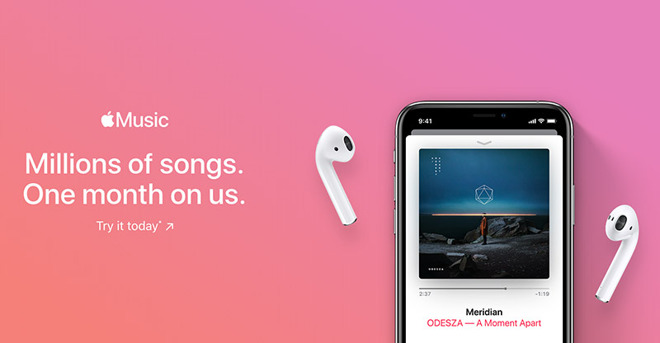 A recent banner advertisement on Apple's official website shows that Apple Music may face a free trial period adjustment, which was shortened from the original 3 months to 1 month. This ad appears on the accessories page of the Apple Online Store, which contains a one-month promotional text for the Apple Music trial period and the slogan of the "Millions of Songs" we are familiar with.

The iTunes page from the ad also states a one-month free trial period, but some ads on the social media platform and other Apple ads scattered on the Internet have not changed, continuing the old three-month trial period.

Although the above policies have not been finalized, some users should no longer be able to enjoy the three-month trial period service. This adjustment is likely to be launched in different regions.

The updated terms mark Apple's first change in its subscription structure since the launch of the Streaming Music Subscription Service in 2015. The three-month free trial is designed to attract new users and is the most generous platform among the world's major streaming services. In contrast, Spotify offers new users a 30-day free trial, while Pandora offers similar rewards for paid products only.

In the past two years, Apple Music has quickly consolidated its position as a leading streaming media provider. According to Apple's latest data released in June, Apple Music has 60 million paying users. Although it is far from Spotify's 100 million users, Apple Music has grown faster than its competitors and controls key markets such as the US. Some foreign media commented that after laying the foundation for the market, Apple, which is fully in the era of service revenue, may no longer be generous, and the shortening of the free trial period is one of the proofs.
google