Li Nan: The acquisition of Intel baseband may mean that Apple and Qualcomm are only temporarily reconciled.

On July 27th, Li Nan, a senior vice president of Meizu Technology, said in his opinion that Apple’s $1 billion acquisitionIntelBaseband business, the more interesting thing behind this thing is thatThis is likely to mean that its reconciliation with Qualcomm is only a truce agreement. Similar to the development of pig teammates, they will simply forbear six years, and they will buy a Wagner to find their own aircraft carrier. 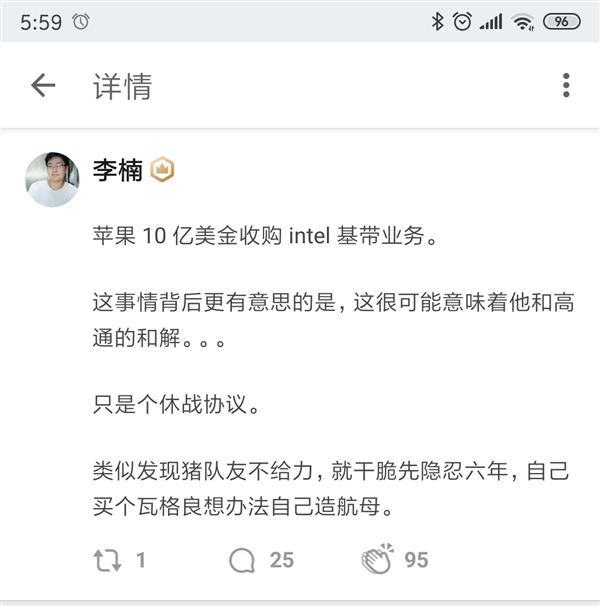 Intel is currentlyiPhoneA modem that enables it to connect to carrier networks such as Verizon and AT&T. But in April of this year,Intel announced its withdrawal from intelligenceMobile phoneIn the modem market, Intel CEO Bob Swan explained that Intel has no clear path to profitability and positive returns.

According to industry insiders,Apple is building its own 5G chip, and its intellectual property from Intel is critical to Apple's 5G chips.

According to Li Nan, in the future, Apple is likely to give up the Qualcomm baseband, and it is not possible to rule out the possibility that the two companies will once again be in court.