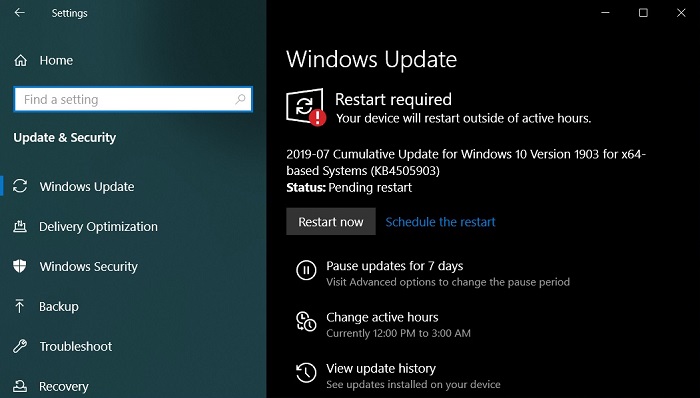 This update was released on July 26, 2019, and some devices have been installed automatically. Earlier this month, Microsoft also pushed the same update to Release Preview Ring testers.

The log shows that Windows 10 KB4508433 solves an annoying bug, which causes some Windows 10 updates to require two restarts and scans, otherwise it will be difficult to complete the installation smoothly.

In addition, Microsoft introduced a new feature called "Reserved Storage" in Windows 10 May 2019 (Version 1903) to ensure that updates can be easily installed in the future.

It should be noted that although this measure can improve the upgrade experience, it also takes up at least 7GB of available storage space (for updating and optional files).

It is reported that this service stack update fixes the problem that disk space will be reserved and can not be released when the language package and feature on Demand installation fail.

If you happen to encounter this problem, you can clean up and release temporary storage that is stubbornly occupied by manually enabling Storage Sense. 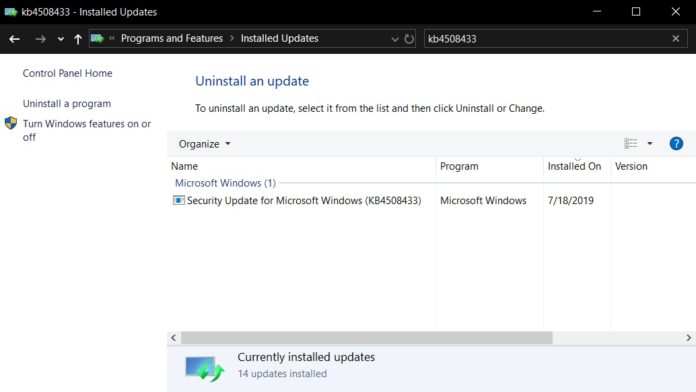 Microsoft also announced that it had fixed another bug, that caused the Windows 10 update installation to fail, which said:

If the user clicks on the check update when installing or uninstalling Windows 10 updates, language packages or on-demand feature packages (FODs), this problem may occur.

In terms of compatibility, Microsoft released KB4511712 to improve the installation and recovery experience on Windows 10 1903 (this update can be downloaded and installed automatically).

As for the July update, Microsoft released a new patch for Windows 10 1903 on June 26, which includes a series of improvements.

After installing KB4505903, the compiled version number of the operating system will rise to 18362.267, bringing bug fixes and improvements for Edge, Windows Hello and other functions.

Finally, the company fixed bugs in important functions such as the Start Menu to ensure that the Start Menu of newly logged-in users works as expected.

In addition, when you install Chromium Edge on your PC, Build 18362.267 will also hide Microsoft Edge browser in UWP version by default.

Related news
Is there a bug in the second cumulative update for Windows 10 1903?
Microsoft releases KB4508433 to fix system update issues for Windows 10 1903
The Windows notepad has now been put on sale in the Microsoft Store (chart)
Push Windows Update push KB4524147 update to fix IE Zero Day vulnerability
Microsoft deploys Microsoft defender update for windows 10 image (Figure)
Hot news this week
Too many questions! Apple has changed the timing of the official release of iOS 16 series
Monkey acne cases have ranked first in the world that the United States has announced the emergency state of public health
Tencent and Logitech cooperation of the cloud game console Revelations: equipped with Android system configuration is low
Credit card points rule intensive adjustment online transaction points more "valuable"
High reserves and low cost experts: calcium ion batteries replace lithium batteries to stand up to the daily
Alibaba executives interpret financial results: the focus of the consumer side is no longer to attract new, but to do a good job in stratified operation
Losses in a single quarter of $ 23.4 billion a record, SoftBank did not carry the plunge of technology stocks and the devaluation of the yen
Sources say Samsung's Galaxy Z Fold4 is going up in price: a 512GB top unit will cost more than 13,000
The prevention and control of the American Monkey epidemic has failed. What should I pay attention to?
Is the micro -business headache? WeChat friends are suspected to have a big move: 7 can only be posted a week
The most popular news this week
After selling Tesla for $6.9 billion, Musk said he was not selling it, but a survey said he was still selling it. The title of the world's richest man may not be guaranteed next ye...
Distributed database OceanBase announced 4.0 product release, single -machine deployment performance is super mysql
The three major indexes of the US stocks opened sharply: ROBLOX fell more than 4%, Twitter and Tesla rose more than 3%
Japan has confirmed that China has overtaken the US for the first time in the world's top three indicators of scientific papers
A wake-up call for Apple? Foxconn says it is feeling the sting of slowing demand for smartphones
Joining Chip Alliance could serve as bridge, says South Korean Foreign Minister
Joe Biden also mentioned Chiplet? An unexpected A-share buzzword in A White House briefing
Nio Li Bin responds to mobile business rumors: This should be the definition of other people's imagination to us
Amazon is pushing a feature called "swipe to pay" that scans your palm to pay in seconds
Text message color, picture quality compression! Google calls out Apple for improving cross-device messaging