AMD's earnings fell by 10% after the earnings report. Analysts are still optimistic about future development

On Wednesday, AMD released its Q2 quarterly earnings report for 2019, with revenue for the quarter of $1.53 billion, down 13% year-on-year; net profit of $35 million, down 70% year-on-year, and its second-quarter revenue exceeded Wall Street analysts' average expectations, adjusted The earnings per share are in line with expectations.

Although AMD has released the Q2 quarterly revenue guidance before, the early warning performance will not look good, but the financial report released yesterday made Wall Street somewhat disappointing, causing AMD's share price to plummet 10% and return to around $30. 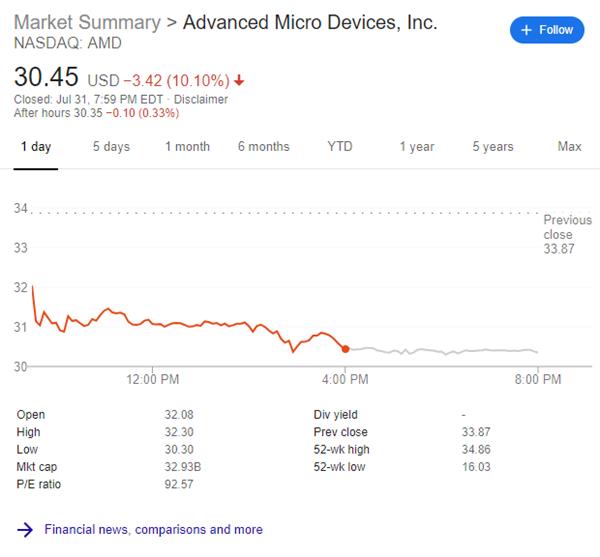 For the Q3 quarter, AMD said it expects revenue to be about $1.8 billion, up and down $50 million, up 9% from the same period last year.

AMD will continue to grow in 2019, but AMD lowered its growth rate in yesterday's earnings meeting. The Q1 financial report in April is expected to be “high single-digit growth” and is now adjusted to “single-digit growth”. Analysts have also lowered AMD's full-year revenue forecast to $6.87 billion.

Although the stock price plummeted, most Wall Street analysts are still optimistic about AMD's prospects. Of the 33 analysts supporting AMD, only 4 gave a sell rating and 12 analysts gave a buy rating. 17 digits are holding ratings.

Despite a 10% drop in share prices, AMD is still the best performer among semiconductor stocks this year, up 65% so far, and the S&P 500 has risen an average of 19%.

Related news
A thousand years of hard work and strong look at the great development of AMD 50 years
AMD's second quarter net profit of 35 million US dollars fell 70% year-on-year
AMD's earnings fell by 10% after the earnings report. Analysts are still optimistic about future development
Analysts are optimistic about AMD's stock price, saying it will be the highest in 20 years
Can AMD's 2019 Q4 revenue increase by 50% and data center revenue double again?
Hot news this week
Wechat has not done this function for N years! Use this app to make up for the defects of wechat
Gree's response to "being disqualified from winning the bid": a mistake made by the bidder in sorting out the materials
IPhone 12: it's more like throwing away the charger
Apple wants to know: what do you do with the charging head of the old iPhone?
Luo Yonghao comments on ideal one: Tesla Model 3 is not a car of a level at all
A 400-brand evacuation Facebook： the internet giant strangled?
How long can "Laoganma" carry on after winning Tencent?
The dotcom bubble? U.S. technology stocks surpassed their 2000 highs relative to the S & P 500
ASUS main board leads Rog day fans Carnival highlights
Tesla's warranty service suddenly shrinks: touch screen and media control unit halved to two years
The most popular news this week
Arm China's 32-bit embedded processor IP "Star" has 7 projects
Sources say the U.S. Department of justice is conducting a criminal investigation into wirecard
Google Chrome browser status_ Access_ Crash due to violation error
LGBTQ community Blue City brothers once soared more than 124% in the market
Without headphones and chargers, the iPhone 12 is even $50 more expensive
Microsoft's free benefits! How to save win10 beautiful lock screen wallpaper
Garmin launches a series of new smart watch products with solar charging
NASA Sherloc will travel to Mars to search for evidence of life
Google slide shows Android 11 may be available on September 8
ASUS announces lingyao 14 sharp dragon edition Notebook: lighter than me, not thinner than me