Android users in the EU will have other search engines to choose from, but they will have to pay "road money".

After being fined $5 billion in the name of a monopoly by the European Union, Google announced on August 2 that it would offer multiple search engine options to Android users in Europe. But don't think Google has compromised like that. They have come up with new ways to make money.

Beginning in 2020, Google will provide multiple search engine service providers in the system search tools and Chrome as required by the European Union.

Although it can't be Android's default search engine directly, in this way, when users choose competitors, Google can still make a lot of money.

In fact, in April this year, Chrome browser's search engine began to offer other services to European users than Google, but FairSearch, a lobbying organization at the time, said that such changes were still insufficient and that Google would still set itself as the default search engine. FairSearch is composed of several anti-Google companies, including Oracle, Nokia and TripAdvisor.

Now that Google has simply cancelled its default settings and started a bidding business, the anger of its competitors can be imagined. Qwant, a French search engine, accused Google of doing so."Absolutely abusing dominance" and "charging only for displaying alternatives".

In addition, search engines still have the opportunity to appear in Android's list of options without bidding. Google pointed out in its official blog that if there are fewer than three service providers offering the lowest starting price, other eligible service providers will have the chance to be randomly selected to fill the vacancies. Qualification refers to submitting applications. But no bid was made. 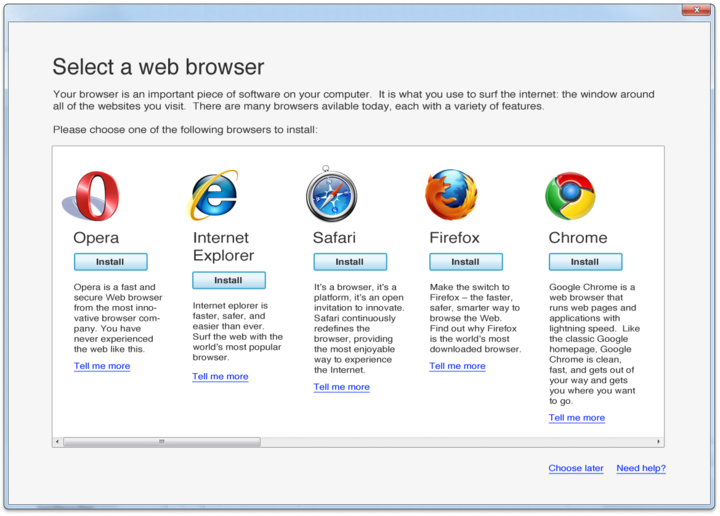 Also, Microsoft was fined for monopoly. Ten years ago, Microsoft was much more honest. In 2009, Microsoft agreed to provide European Union users with up to a dozen browser options other than IE when installing Windows, which are presented in random order. Even if users choose competitors'products, Microsoft will not charge these manufacturers.

For the time being, the EU has little comment on the policy-based approach of Google. Its spokesman just said that "we will pay close attention to the implementation of the screen selection mechanism" and pointed out that these changes allow Google's competitors the opportunity to reach pre-installed agreements with smartphone and tablet manufacturers.

The picture is drawn from:Memeburn