Shock! Google automatically rebuilt the complete brain of the fruit fly: the 40 trillion pixel image was first made public!

【新智元导读】Today, Google, in collaboration with Howard · Hughes Medical Institute (HHMI) and the University of Cambridge, has released an intensive study of the fruit of the Drosophila brain — — automatically reconstructs the entire fruit fly brain. They use thousands of Google Cloud TPUs to rebuild the entire fruit fly brain up to 4 billion pixels. With a complete brain image, scientists are one step closer to understanding how the brain works.

do you know? Drosophila is recognized as one of the most thoroughly studied organisms. Up to now, eight Nobel Prizes have been awarded to research using fruit flies, which have driven the development of molecular biology, genetics and neuroscience.

Scientists have always dreamed of understanding how the nervous system works by drawing the structure of a complete brain neural network.

This makes the brain of the fruit fly easier to study as a complete circuit.

Today, Google has teamed up with Howard · Hughes Medical Institute (HHMI) and the University of Cambridge to publish a new in-depth study of the fruit fly brain research ——Automatically reconstruct the entire fruit fly brain.

They also provide a complete picture of the Drosophila brain, which anyone can download and view, or browse online using interactive tools. They developed a 3D interactive interface called Neuroglancer.

This is not the first time that the Drosophila brain has been completely drawn. In January of this year, Science magazine covered the cover story and introduced MIT and Howard · Hughes Medical Research Institute (HHMI) scientists successfully imaged the complete brain of Drosophila. And the resolution has reached the nanometer level. But that was still an artificial method, using two of the most advanced microscope techniques. 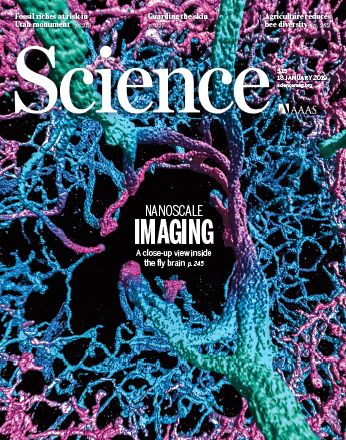 For decades, neuroscientists have been dreaming of drawing a complete map of the brain's neural network, but for a human brain with 100 billion neural networks, the amount of data that needs to be processed is unimaginable. If you can automatically rebuild the Drosophila brain, it may be a step closer to automatically drawing the human brain.

This is not the first time Peter H. Li's team has attempted to map brain neurons using the AI ​​method. They studied on smaller datasets in 2016 and 2018, respectively, as shown in the lower right corner of the image below. 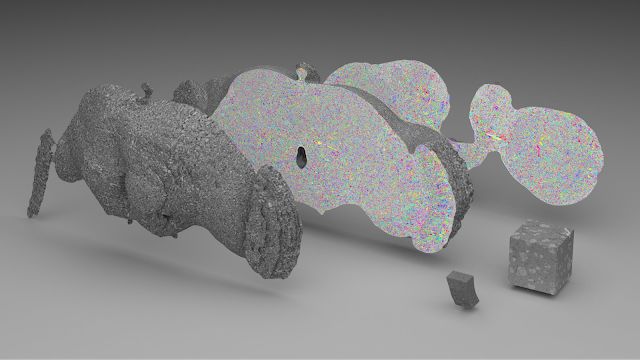 The lower right corner of a 40 trillion pixel Drosophila brain is the smaller data set analyzed by Google AI in 2016 and 2018, respectively.

In 2018,Google has collaborated with the Max Planck Institute for Neurobiology in Germany to develop a deep learning-based system that automatically maps neurons in the brain.. They reconstructed a scanned image of the brain of a 1 million cubic micron zebra finch.

Researchers say that due to the high resolution of imaging,Even with only one cubic millimeter of brain tissue, it can generate more than 1000TB of data.. Therefore, this time rebuilding the brain of the whole fruit fly, I think the amount of data is huge.

Used to process data, is Google’sCloud TPUAnd it is thousands!

TPU will really fly! GoogleAI scientists use TPU to help rebuild the neural connections throughout the fruit fly brain!

Below, the new wisdom brings a detailed interpretation of this research:

In the course of the experiment, the main data set used was FAFB, which is an abbreviation for “full adult fly brain” (see the end of the relevant dataset for information).

Researchers on this data set will brain the fruit flyCut into thousands of ultra-thin slices of 40 nanometersEach slice was then imaged using a transmission electron microscope, which produced more than 40 trillion pixels of brain images. And these 2D images are integrated into a coherent 3D Drosophila brain image.

Next, the researchers used thousands of cloud TPUs and applied them.Flood-Filling Network (FFN)In order to automatically track each neuron in the Drosophila brain. 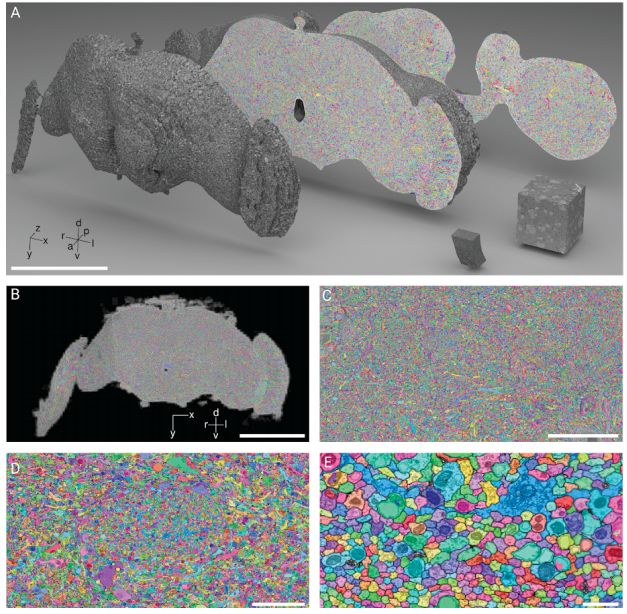 Dense segmentation of the entire Drosophila brain through FFN

A in the above figure is a 3D rendered FAFB data set smoothed tissue mask. Any coronal slice (dataset XY plane) shows the entire internal FAFB-FFN1 segmentation. B-E shows the effect of increasing the zoom ratio. 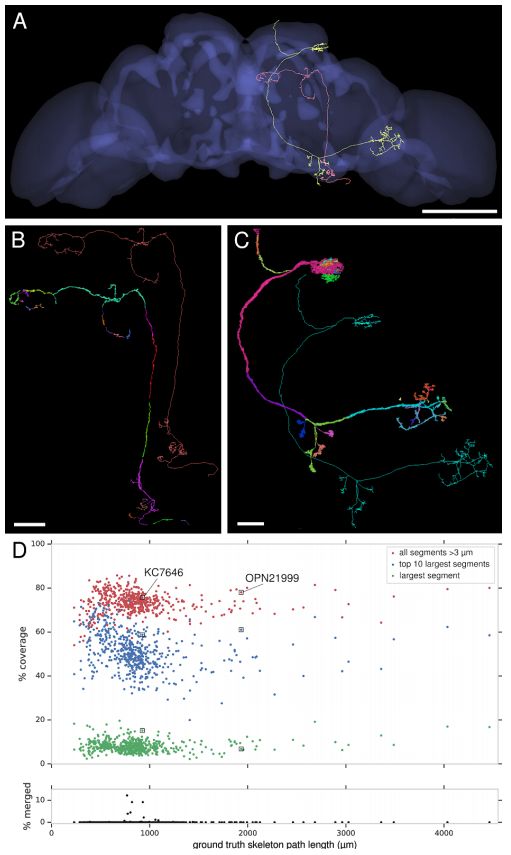 Although the overall performance of this algorithm is not bad, when the alignment is not perfect (the image content in the continuous slice is unstable) or occasionally due to the loss of multiple consecutive slices during the imaging process, the performance will be degraded.

In order to make up for this problem, the researchers willCombine FFN with two new programs.

First, the consistency between the slices of each region in the 3D image is estimated, and then the content in the image is locally stabilized while the FFN tracks each neuron. 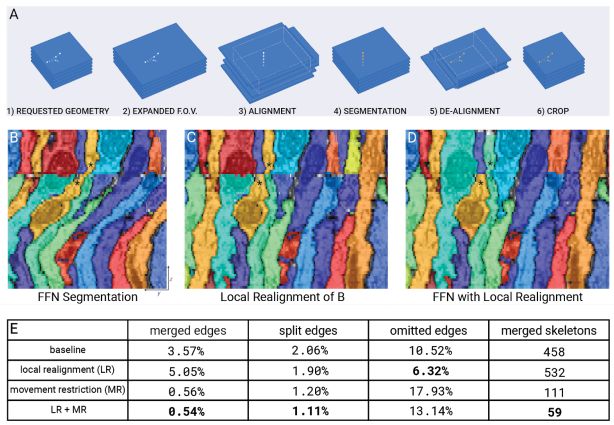 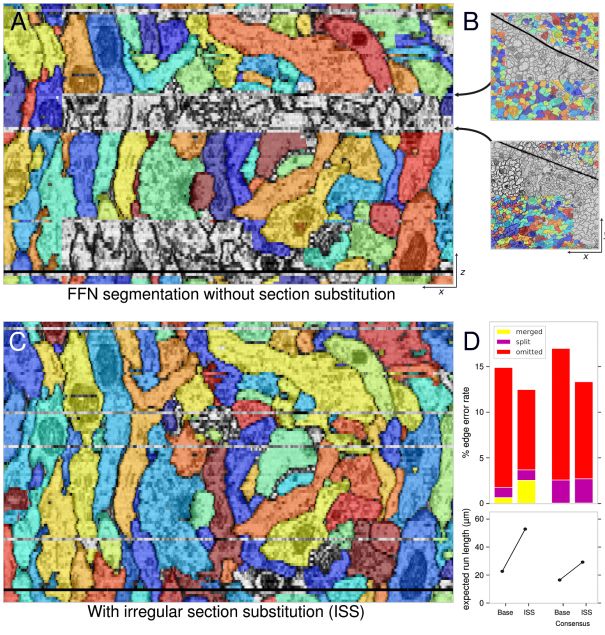 Segmentation of the overall FAFB-FFN1 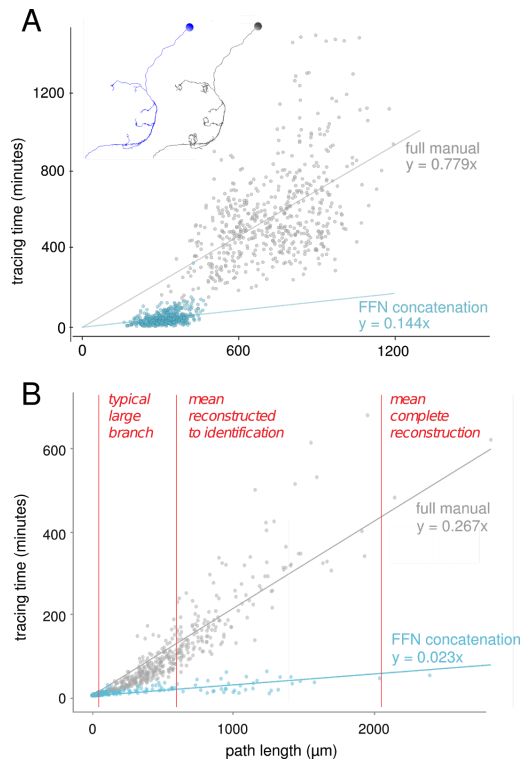 Visualization is both important and difficult when dealing with 3D images that contain trillions of pixels and complex shapes. Inspired by Google's history of developing new visualization technologies, researchers have designed a new, scalable and powerful tool that anyone with a Web browser that supports WebGL can access.

The result is Neuroglancer, an open source project on github that looks at petabyte-level 3D volume and supports many advanced features such as arbitrary-axis cross-sectional reslicing, multi-resolution meshing, and Integrate with Python to develop the power of custom analytic workflows. The tool has been widely used by collaborators, including Allen Brain Science Institute, Harvard University, HHMI, Max Planck Institute, MIT, and Princeton University.

Google said that HHMI and Cambridge collaborators have begun to use this reconstruction to accelerate their research on Drosophila brain learning, memory and perception. However, since the establishment of the connection group requires the identification of synapses, the above result is not a true connectome. They are working closely with the FlyEM team at Janelia Research Campus to create a highly validated and detailed connectome for the Drosophila brain using images obtained with the FIB-SEM & rdquo; technology.

Related news
Eighteen years ago, this Versace green dress led to the birth of Google Image (pictured)
Hot news this week
Wechat has not done this function for N years! Use this app to make up for the defects of wechat
Gree's response to "being disqualified from winning the bid": a mistake made by the bidder in sorting out the materials
IPhone 12: it's more like throwing away the charger
Apple wants to know: what do you do with the charging head of the old iPhone?
Microsoft official free data recovery tool windows file recovery experience
Amazon cancels disposable plastic products in India
Luo Yonghao comments on ideal one: Tesla Model 3 is not a car of a level at all
Tencent magic change Yang surpasses video self mockery: I'm a simple and honest fake spicy sauce lost 16 million
A 400-brand evacuation Facebook： the internet giant strangled?
How long can "Laoganma" carry on after winning Tencent?
The most popular news this week
Baidu Linyuan leaps: great strategic determination is needed to adhere to the core technology innovation in the end
Cellon 865 Plus 120Hz millet 10 super cup fast: price straight to 6000 yuan file?
Americans try to disinfect borrowed books with microwave, and the library posts for mercy
Samsung and research team found a new semiconductor material: amorphous boron nitride (a-bn)
Operation of the mystery: the Internet Archive is regarded as the CDN of JS file by the Bank of Barclays
Another delisting from the US? Sina CEO Cao Guowei's privatization proposal received
2000 cheaper! Qiong version of iPhone is popular
Chinese manufacturers dominate 5g telecom equipment: Huawei / ZTE takes 48.9% share
According to the news, Samsung's next generation of foldable mobile phones is named Galaxy Z fold 2
Sina, which has been listed in the United States for 20 years at $41 A share, has received a privatization proposal