At the Taipei Computer Show,AMDThe company announced the launch of the 7-nm Ruilong 3000 series processor and X570 chipset. The new generation of AM4 platform not only improves performance, but also brings PCIe 4.0 support. This is the first desktop platform to support the PCIe 4.0 specification. This time AMD takes the lead.IntelNow. 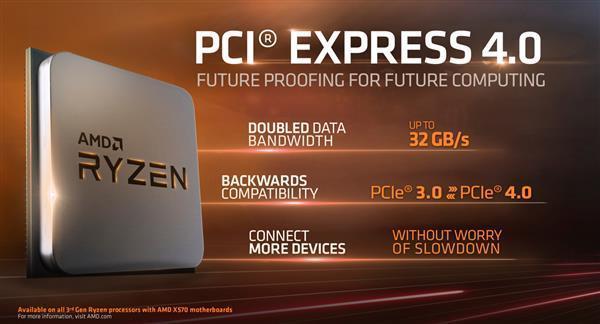 PCIe 4.0 bus has a speed of 16GT/s and a total bandwidth of 32GB/s. This high performance benefits not only graphics cards,SSDHard disk performance can also break through the current limitation of PCIe 3.0 X4 channel up to 4 GB/s.

To this end, AMD has launched the first PCIe 4.0 master, PS5016-E16, in cooperation with Qunliang, which supports the PCIe 4.0 X4 channel, mainly for the high-end SSD hard disk market. 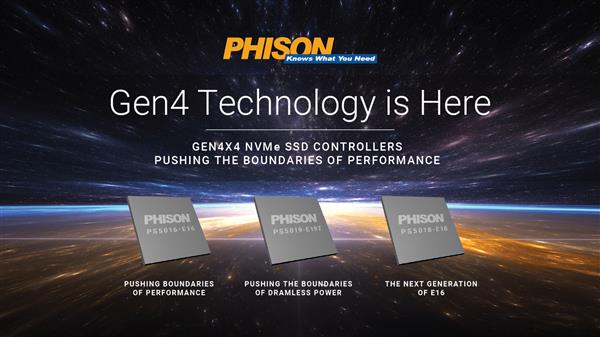 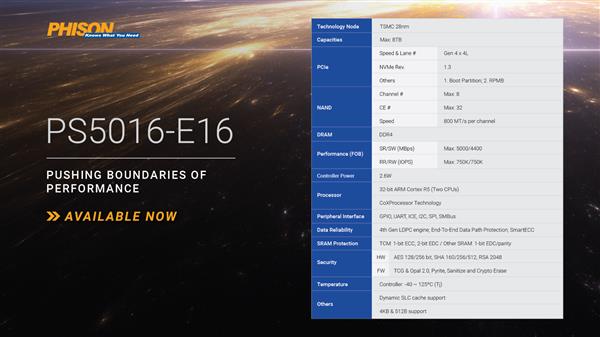 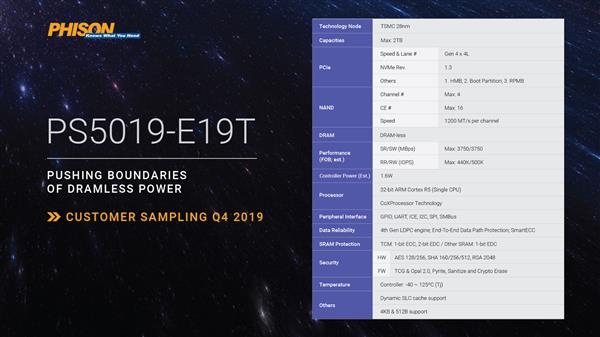 Although PS5019-E19T master control has a higher naming, its location is actually lower than PS5016-E16 (the fantastic group connection master naming method). It is also a 28-nm process. It supports NVMe 1.3 standard, 4-channel 16 CE structure and does not need DRAM cache. Therefore, the SSD cost of E19T master control will be lower, but the cost is also lower, continuous reading and writing. The input performance is 3750MB/s. Random read and write are 440K and 500K IOPS. The power consumption is also greatly reduced to 1.6W, and the maximum support capacity is 2TB.

Group Alliance said that the PS5019-E19T main control will appear in the fourth quarter of this year, the specific time of listing has not been announced. 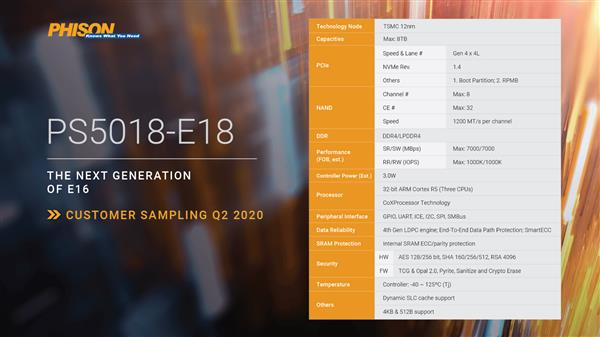 PS5018-E18 is the successor of PS5016-E16, which is the flagship of the second generation PCIe 4.0. The process technology has been upgraded to 12 nm. It supports the structure of PCIe 4.0 X4 and 8 channels 32 CE. The speed of each channel has been increased from 800MT/s to 1200 MT/s, so the speed of continuous reading and writing has been increased to 7 GB/s, almost 4.0 X4 of PCIe. Ultimate performance.

In addition, the random performance of the main control of PS5018-E18 is also improved. The random read and write performance is 1000K and 1000K IOPS.Million-level IOPS performance can be said to have reached the enterprise level at the expense of power consumption up to 3.0W. After all, the CPU core used has changed from a dual-core Cortex-R5 to a three-core Cortex-R5.

According to the group association, PS5018-E18 master control will be launched in the first half of next year, mainly for the new generation PC, 8K high-definition competition, edge computing, machine learning, artificial intelligence and other high-end computing market.