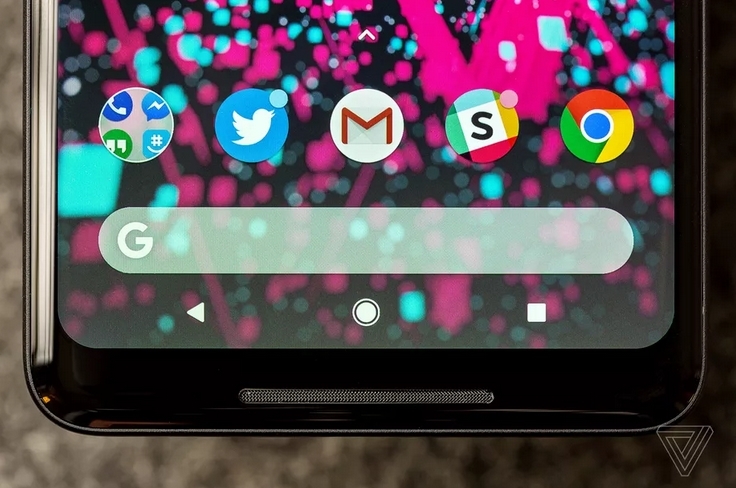 Netease Technology News, August 9 news, according to foreign media reports, Google said that Android users believe that three-button navigation is more ergonomic than gesture navigation. But the latter is more efficient and can display more content, so it is a better navigation mode.

A day after the final beta of Android Q was released, Google detailed on the official blog Android Developer why the system's new gesture navigation mode is better than before.

Android UI product manager Allen · Huang (Allen Huang) and Rohan · Rohan Shah write, "by turning to a gesture mode for system navigation, we can provide more for the application. Screen space for a more immersive experience. ”

No one is arguing about the benefits of doing so, but the trouble for Google is that Android's "return" function, and the best way to use gestures to retain this feature —— will make end users feel that the solution is compliant Their nature. The two product managers wrote, “We prioritize this goal, not other less frequent navigation operations, such as ‘app drawer’&&quoquorecently used’. ”

“Our research begins with an understanding of how users hold their phones, what a typical touch range is, and what features are most commonly used by mobile users. On this basis, we have built many prototypes and tested them comprehensively, involving dimensions such as desirability, speed of use, and ergonomics. “They’ve come up with a series of studies —— how fast the user learns the system, how fast the user adapts to the system, and how the user feels about the system,” they said. ”

The heat map below shows the area where the user can “comfortably” gesture when using the phone with one hand. As you can see, it shows that the "return" function should be moved to the sides of the phone, just as Google did in Android Q: 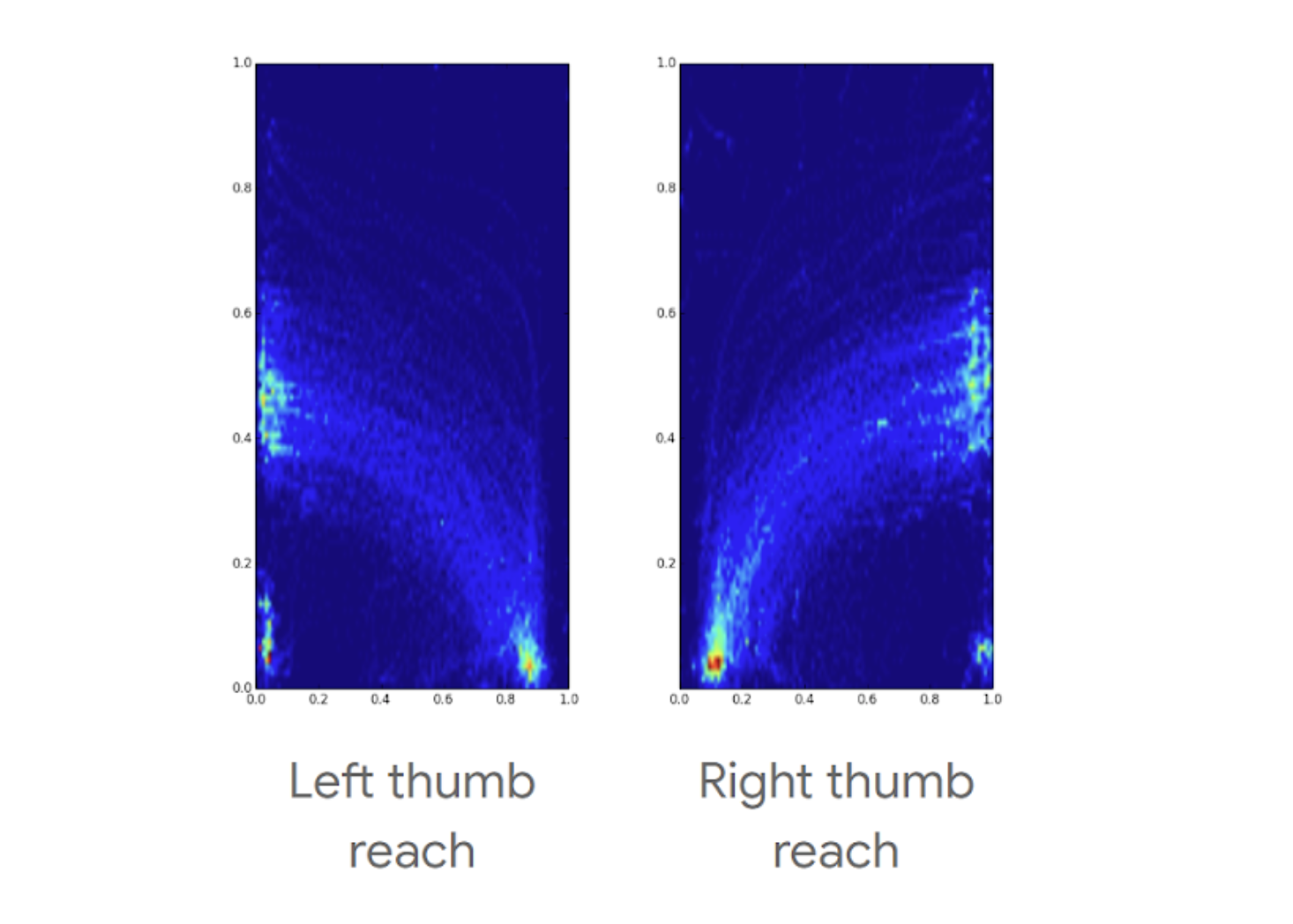 Google admits that the iPhone-style gesture system “at the cost of not being able to quickly access the overview/recent applications”. Sliding the screen up and pressing the screen is slower than clicking the button. But the company said that Android users call out multitasking views only half the time they open the main screen.

It's very interesting: users actually think that three-button Android navigation is more ergonomic. The navigation model has been in use for many years before Google implemented changes on Android P last year. On the ergonomic score, those buttons scored 5.78 points, which is higher than the Android Q gesture (5.39 points). 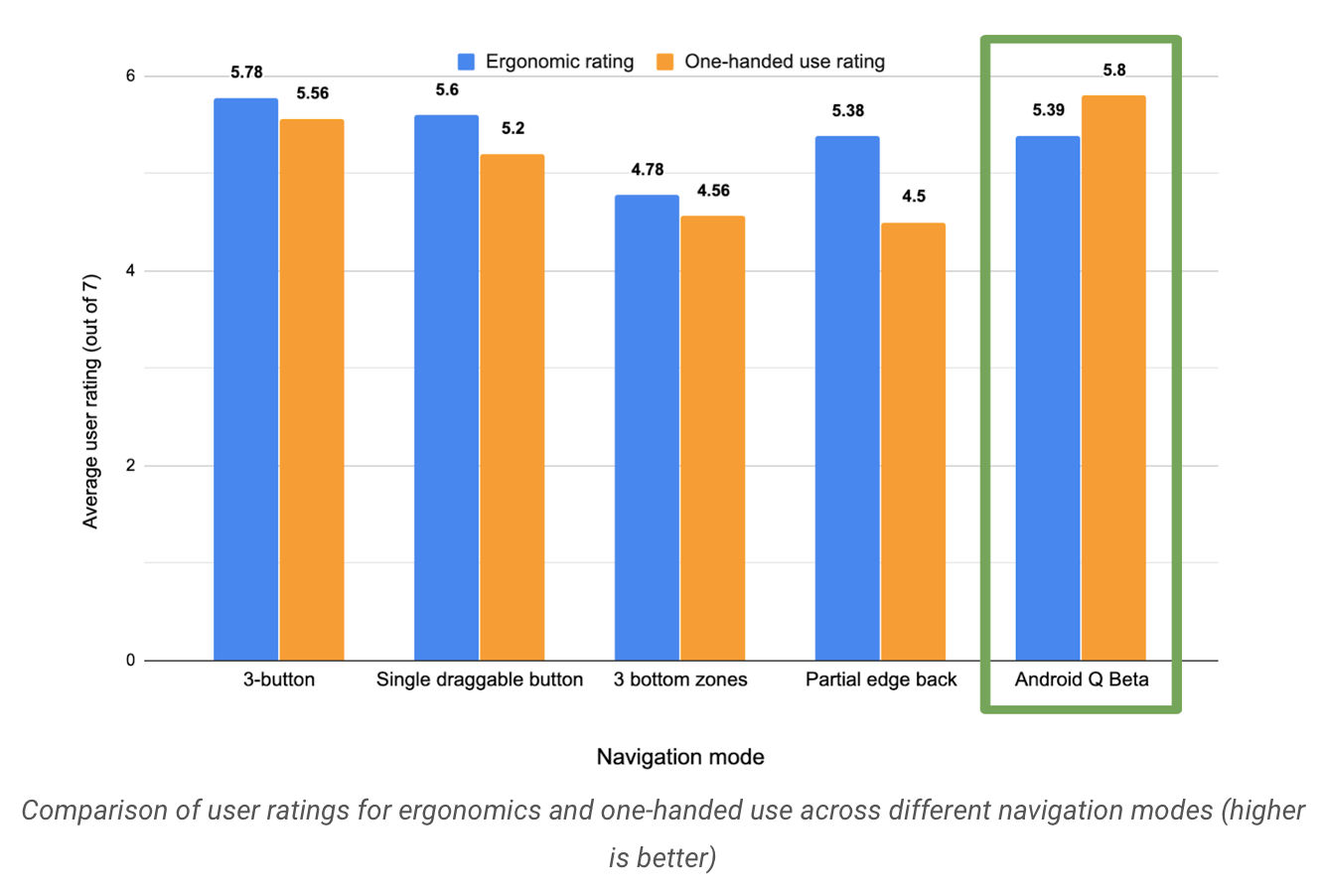 On the other hand, users think that gestures are a better way to control one-handed phones. Google’s data shows that Android Q-style navigation can help people get things done faster, even if some people need some time to get familiar with it:

In addition to the application drawer, gestures are a huge change for people. They take an average of 1-3 days to adapt to —— in particular, users have some difficulty dealing with left-sliding or right-sliding bottom bars and triggering back. Such an operation.

In qualitative research, we found that after the initial run-in period of 1 to 3 days, the user is proficient and can always distinguish between the two gestures. Most users don't want to switch back to three-button navigation (even though this is still an option). 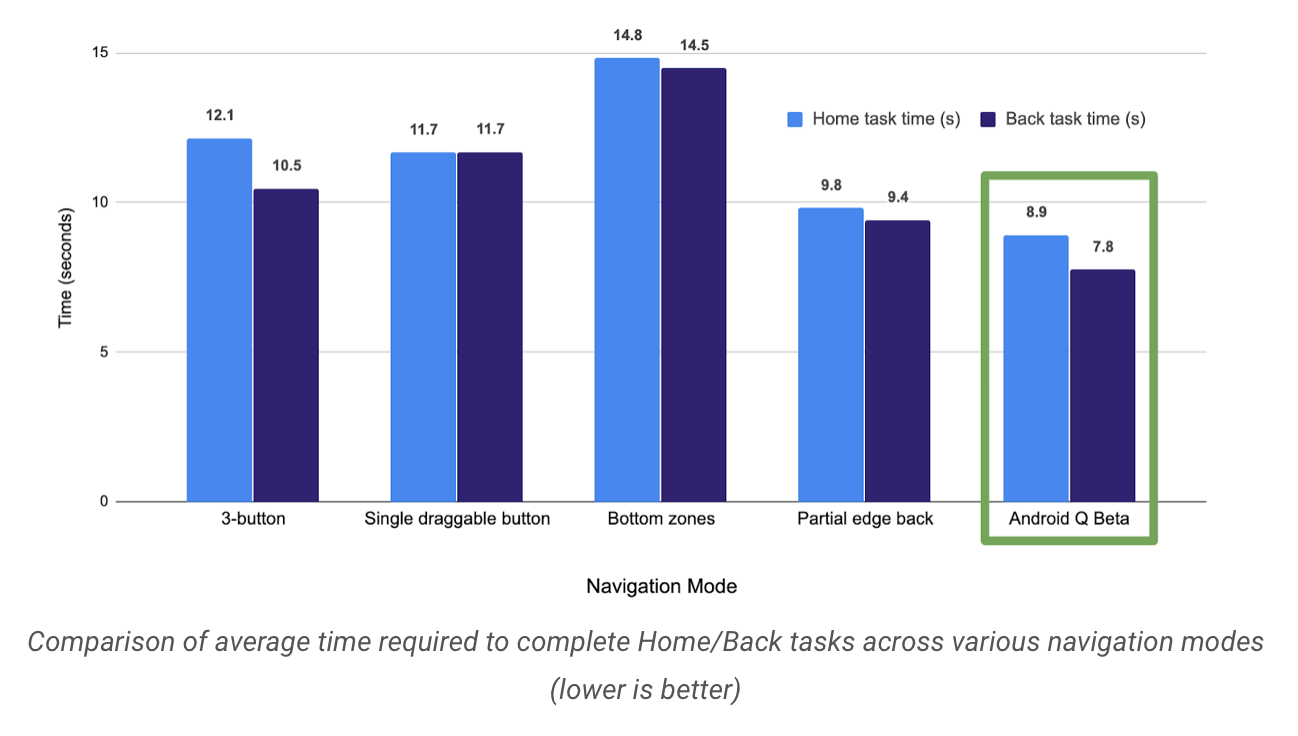 Google found that people used the return function less frequently during the first few days of trying out Android Q and getting familiar with it. & ldquo; After this time, the number of times people press (return each day) is finally the same as the three buttons and our Android P navigation. ”

Therefore, Google finally decided to continue to implement gesture navigation. The company has confirmed that in order to avoid fragmentation and differences in the way mobile phones are navigated by different manufacturers, mainstream Android phone manufacturers have agreed to set Google's new navigation method as the default navigation method on Android Q products, including Samsung, LG, OnePlus, Motorola, Xiaomi and HMD Global.

But Google also made it clear that if users are willing, they can choose to continue using the classic three-button navigation bar in Android Q. This option is not only included in the beta; it will also appear in the official version. After forcing Pixel 3 users to use gestures, Google will also offer them the same option to "select your own navigation method".

Google's blog post acknowledges that the use of gesture navigation has shown a "surge" in the past few years. The company didn't mention the iPhone X, but its move reflects its recognition of the Palm Pre that is leading the trend. (Lebang)<#comment>

Related news
Google releases the last beta version of Android Q
Advanced navigation received $13 million a round financing to accelerate the manufacture of driverless vehicles with AI
Hot news this week
Wechat has not done this function for N years! Use this app to make up for the defects of wechat
Microsoft official free data recovery tool windows file recovery experience
IPhone 12: it's more like throwing away the charger
Gree's response to "being disqualified from winning the bid": a mistake made by the bidder in sorting out the materials
Apple wants to know: what do you do with the charging head of the old iPhone?
Tencent magic change Yang surpasses video self mockery: I'm a simple and honest fake spicy sauce lost 16 million
Luo Yonghao comments on ideal one: Tesla Model 3 is not a car of a level at all
A 400-brand evacuation Facebook： the internet giant strangled?
How long can "Laoganma" carry on after winning Tencent?
The dotcom bubble? U.S. technology stocks surpassed their 2000 highs relative to the S & P 500
The most popular news this week
Developers open source a tool to turn Ubuntu into a rolling update
Yijia returns to the affordable mobile phone market! Nord announced: see you on July 21
Alibaba cloud IOT and tmall Genie jointly set up "Ali aiot innovation center"
IPhone 12 series case exposure: Design reproduction of apple 4
Galaxy A71 of Samsung 5G UW models will provide Verizon users with a millimeter wave experience
Nord announced: see you on July 21
More focus on the design of Internet of things
NASA releases inspirational Mars fortitude Rover Promo
Air conditioning industry "palace fight" drama! Glimei's open "fight"
withdraw from a group! The United States officially informed the United Nations to withdraw from the World Health Organization