Following Pan Jianwei's team's 18 optical quantum bits entanglement last year, recently, with the cooperation of Zhejiang University, Institute of Physics of Chinese Academy of Sciences, Institute of Automation of Chinese Academy of Sciences, Beijing Computing Science Research Center and other domestic units, another world record has been set in the field of quantum computing-20 superconducting quantum bits have been developed. Quantum chip, and successfully manipulated to achieve global entanglement!

This blockbuster achievement was published in the top international magazine Science. 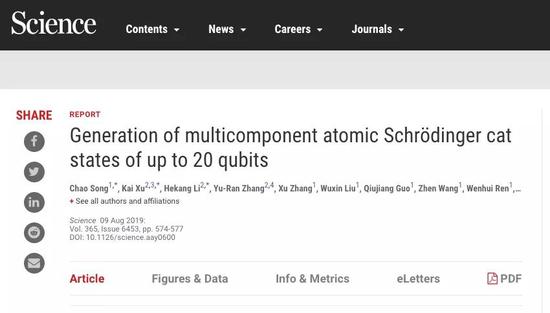 How good is this job?

Within 187 nanoseconds (equivalent to one millionth of the time required for a person to blink), 20 artificial atoms undergo several "transmutations" from the coherent state of "starting" to form entangled states with two opposite states at the same time. 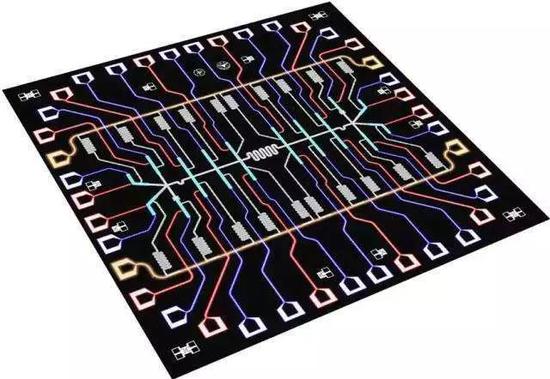 As the People's Daily commented:

Manipulating these qubits to generate globally entangled states indicates that the team can really mobilize these qubits. This "brilliant" 187 nanoseconds witnesses another step forward in the research of quantum computing.

The Schrodinger Cat of 20 Artificial Atoms

The success of quantum computing depends on the ability to entangle large-scale systems. Researchers have developed a variety of platforms, among which superconducting quantum bits and trapped atoms are the most advanced.

It is proved that the controllable generation and detection of entanglement is an important direction for the development of large-scale quantum processors.

However, generating and verifying multi-bit entangled states on fully controllable and scalable quantum platforms is still an outstanding challenge.

We report the generation of 18-bit globally entangled GHZ States and 20-bit Schrodinger cat states on a quantum processor.

By designing uniaxial twisted Hamiltonian, once the quantum bit system is initialized, it will evolve coherently into the superposition of multi-component atomic Schrodinger cat states, i.e. atomic coherent states, including GHZ states at a given time interval.

Researchers say that this approach on solid-state platforms can not only stimulate people's interest in exploring the basic physics of quantum multibody systems, but also promote the development of practical applications of quantum metrology and quantum information processing. 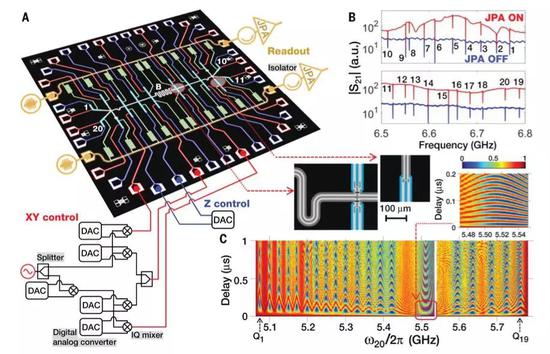 (A) Pseudo-color circuit images interconnected by central bus resonator B (grey) show 20 superconducting qubits (marked by blue lines clockwise from 1 to 20). Each qubit has its own flux bias line (blue) for Z control, 16 qubits have separate microwave lines (red) for XY control, and Q4, Q7, Q14 and Q17 share adjacent qubit microwave lines. Each qubit has its own readout resonator (green), which is coupled to one of the two transmission lines (orange) for simultaneous readout. An enlarged view of a typical QBs-bus resonator coupling capacitor is also shown, where the points shown have different capacitance values, and an illustrative schematic diagram of the measurement settings.

(B) The signal spectrum through the transmission line, | S21 |, where the response of the qubit readout resonator is visible when it falls.

(C) The switching spectrum of Q20 is obtained by exciting Q20 to | 1I and then measuring its | 1i-state probability (color bar) as a function of qubit frequency and delay time. The probability data (27) corrected to eliminate measurement errors are from two consecutive scans separated by vertical white stripes. During the scanning period, the other 19 quantum bits are classified by frequency under Z control and can be identified by herringbone pattern. This is due to the coherent energy exchange between Q20 and bus resonator B-mediated quantum bits. The magnified view is the direct energy exchange between Q20 and B.

The superconducting quantum processor (Fig. 1) consists of 20 transmon qubits with adjustable frequencies. Quantum bits are detected by their respective readout resonators (Fig. 1B). 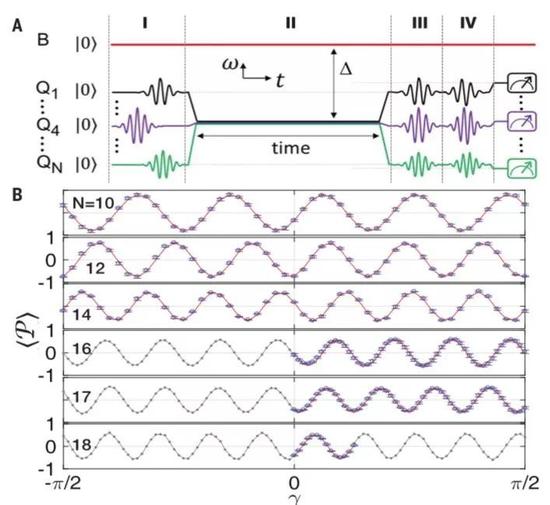 (A) Pulse sequences for generating and characterizing N-qubit GHZ states.

(B) N-qubit GHZ parity oscillator. For each data point (blue circle), the original 2 ^ N occupation probability is found by repeating the pulse sequence about 30 × 2 ^ N times, and then the measurement error (27) is eliminated by readout correction, and then the maximum likelihood estimation is used to verify the possession probability and calculate the parity check value P. In order to estimate the error bar (error bars), we divide the complete data set into several subgroup, each subgroup contains about 5 × 2 ^ N samples, and the error bar corresponds to the standard deviation calculated from these subgroup. The red line is sinusoidal curve fitting, and the amplitude of stripes corresponds to R00.0 and 11.1. For N ≥ 16 to 18, it takes too long to repeat the measurement if the sampling size is 30 × 2 ^ N in the whole range of γ ∈ [- π / 2, π / 2]. The gray points connected by gray lines come from the experimental data that reduce the sampling size of ~ 2 ^ N, and there is no error bar, which is used as a visual guide to indicate the correct N-segment oscillation period.

In the course of less than 200 nanoseconds, the collective state of the artificial atom undergoes many changes. At different time points, Schrodinger cat states with different components (corresponding to the number of red circles in the ball) appear, and finally two components (two opposite states) are formed.

Figures A and B are theoretical predictions and experimental observations, respectively. Fig. C is a redefinition of the five-component Schrodinger cat state from a new perspective. The presence of blue regions in the sphere is a more powerful proof of the existence of quantum entanglement.

Within 187 nanoseconds (only one millionth of the time required for a person to blink), 20 man-made atoms undergo several "transmutations" from the coherent state of "starting" to form entangled states with two opposite states at the same time. In the title of the paper, the team used "Schrodinger cat" to describe the captured phenomenon. Manipulating these qubits to generate globally entangled states indicates that the team can really mobilize these qubits.

To seize the commanding hegemony of quantum hegemony,

Entangled state preparation is the key

Because of the potential value of quantum information technology, European and American countries are actively integrating all aspects of research power and resources to carry out national-level collaborative research. Among them, the European Union announced the launch of the flagship project of quantum technology in 2016, while the United States Congress formally adopted the National Quantum Initiative (NQI) on June 27 to ensure that it will not lag behind other countries developing quantum technology.

Foreign high-tech giants, such as Google,MicrosoftIBM, IBM and others have also been strongly involved in quantum computing research, and frequently announce progress.

Especially Google. Google has been working on superconducting quantum computers since 2014. Last March, Google announced the launch of a 72-qubit quantum computer with a 1% low error rate; last May, Google published an article in Nature-Physics describing the task of sampling bit-strings from the output of random quantum circuits, which can be considered as the "hello worl" of a quantum computer. D"procedure.

In another paper published in Science, A Blueprint for Demonstrating Quantum Supremacy with Superconducting qubits, Google elaborated on the blueprint for quantum hegemony, and for the first time experimentally demonstrated a version of principle verification.

However, IBM,IntelThe quantum computer prototypes announced by Google and others have not formed entangled states. Simply comparing physical quantum bits, this advantage is not very significant in the application level.

As mentioned earlier, coherent manipulation and entangled state preparation of multiple quantum bits are the most important indicators for the development of scalable quantum information technology, especially quantum computing. Why?

Classical computers encode and manipulate information through a series of binary codes 0 and 1. What quantum bits do is essentially the same, except that they can be in the superposition of 0 and 1. In other words, when we measure the state of quantum bits, we get a probability of 0 or 1.

In order to perform computational tasks with many of these quantum bits, they must remain in an interrelated superposition state, the so-called quantum coherent state. These quantum bits are entangled, and the change of one bit can affect all the remaining quantum bits. Therefore, the computing power based on quantum bits will far exceed that of traditional bits.

However, what really matters is not just the number of qubits (which is not even the main factor), but the performance of the qubits and the efficiency of the algorithm.

To 18 light quantum and 20 superconducting quantum,

Multi-particle entanglement has been leading the world

As the technological highlight of quantum computing, the manipulation of multi-particle entanglement has always been the focus of international competition. In the photonic system, Pan Jianwei's team has taken the lead in realizing the entanglement of five photons, six photons, eight photons and ten photons in the world, and has maintained the international leading level.

Related news
RHEL-based Scientific Linux stops development Related devices will be migrated to CentOS
Chinese scientists have made a major breakthrough in quantum computing: global entanglement of 20 quantum bits
Breaking through the limit, China leads the world in high temperature superconductivity research
Are you OK？ Sogou input online "Lei Jun imitation" voice
Hot news this week
Britain and China are discussing involving Chinese enterprises in the construction of high-speed rail in the country
New patent exposure of magic mix alpha millet: screen accounts for over 100%
Foreign netizens talk about Xiaomi 10: half cheaper than Samsung S20 with similar configuration and reasonable price
Data shows that global wafer production capacity is monopolized by Samsung TSMC and other manufacturers
Huawei: no cooperation with crypto Ag and other companies under the control of CIA
100% full screen? Samsung Galaxy note 20 first exposure: or in July
Global wafer capacity is monopolized by Samsung TSMC and other domestic CPUs / memory, which is too difficult
Xiaomi 10 series international edition will be postponed after MWC is cancelled
Amazon employee No.1: the giant is unstoppable, but there is evidence for the split
Alipay combined with a number of service providers push support plan catering businesses can get free online business services.
The most popular news this week
US scientists announce the key step to create the first new coronavirus atom map for vaccine development
Huawei announced 91 5g contracts and will invest 20 million US dollars to support 5g applications
10 years after its launch, Sony closed its official mobile phone website and Forum
Huawei releases 20205G new products and solutions Obtained 91 5G commercial contracts
Xiaomi's products are on sale: from 4999 yuan
Huawei has 1.3 million HMS ecological developers
Maybe Kirin 820, Huawei's official announcement will launch a new SOC
Microsoft has begun testing new windows 10 color icons: that's it
Invitation letter of Xiaomi 10 conference not delivered in time: detachable micro satellite model
AMD's 3400G processor goes up 20% against market price