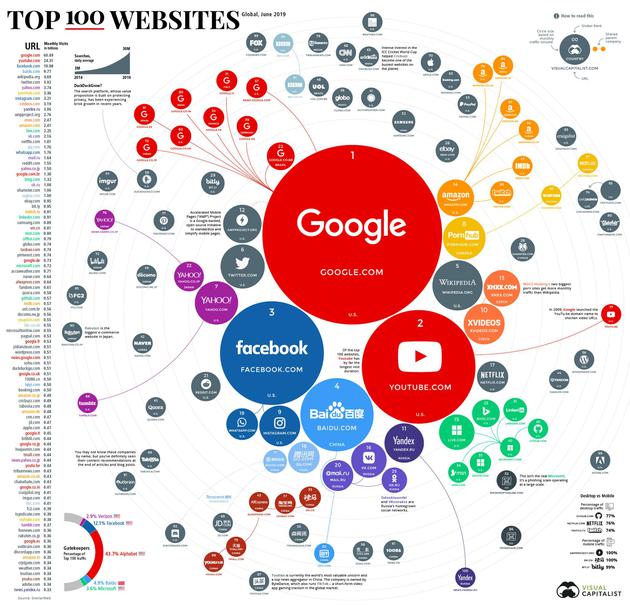 Sina Technologies News, Beijing Time, August 14, morning news, according to Visualcapitalist website reports, as the world becomes more and more interconnected, the Internet has become an unprecedented part of people's lives, the explosive growth of user traffic on the world's top 100 websites is still continuing.

To get into the list of the world's top 100 websites, your site needs at least 350 million visits in a single month. Using data from Similar Web, Visualcapitalist lists the 100 largest websites on the global Internet in iconic terrain.

The following are the top ten websites:

From the list of 100 websites, we can also see the trend of several Internet users:

Streaming video and video sharing is another driving force of global Internet traffic. Thanks to high-performance mobile phones and high-traffic data packages, video is now an indispensable part of Internet content consumption, and reflected in a variety of forms. For example, from Netflix to Instagram.

China's strong rise, 15 websites on the list of the top 100 websites, second only to the United States. Although most Chinese companies focus on the huge domestic market, there are still many companies, such as Tencent, which are internationalizing through investment. (Muer)

Related news
Why do some cities in the United States choose to say "NO" to 5G?
Figure 1 Huawei nova6 5g: DxO preview No.1
Chinese game publishers may have become global No.1
Hot news this week
Yao Ting, a "gifted girl" who won Huawei's 1.56 million yuan annual salary, responded: what does salary not mean
Qualcomm lobbied the US government to lift the ban on the sale of components to China
Tencent re racing e-commerce, but does not want to make the next pinduoduo
Tencent's response to wechat ban issued by the United States: under evaluation
Xiaomi 10 supreme commemorative edition press conference Lei Jun's live rehearsal
Wechat in Apple's Google App store may be banned. What if wechat can't be used on iPhone
Ali 88vip bought value: you can get Netease cloud music black glue annual card for free
Tencent launched the largest school recruitment in history, and these positions are most popular
The United States blocked tiktok and wechat one after another: This is the real purpose!
Votebymail is dedicated to helping American voters easily apply for postal ballots
The most popular news this week
Lei Jun gave a 4-hour speech on Xiaomi's 10th anniversary
Lei Jun gave a 4-hour speech on Xiaomi's 10th anniversary
The second half of Xiaomi's 10th anniversary speech
"Go ahead" of Xiaomi 10
The world's first mass-produced transparent TV: millet transparent TV price: 49999 yuan
Nokia mobile phone maker HMD received $230 million investment from Google and Qualcomm
Parallels Desktop 16 Release Support Big Sur Better Performance Multi-touch Gestures
The latest statement by the founder of SMIC: the ability of the United States to restrict China is not so strong, but it should not be taken lightly
Don't do the next TikTok Zoom Give up China and choose India
Google: making 34 billion dollars a year can't stop the middle-aged crisis