The U.S. spent another $600 million to build E-class overruns, which came out in 2023 and counted for the world. 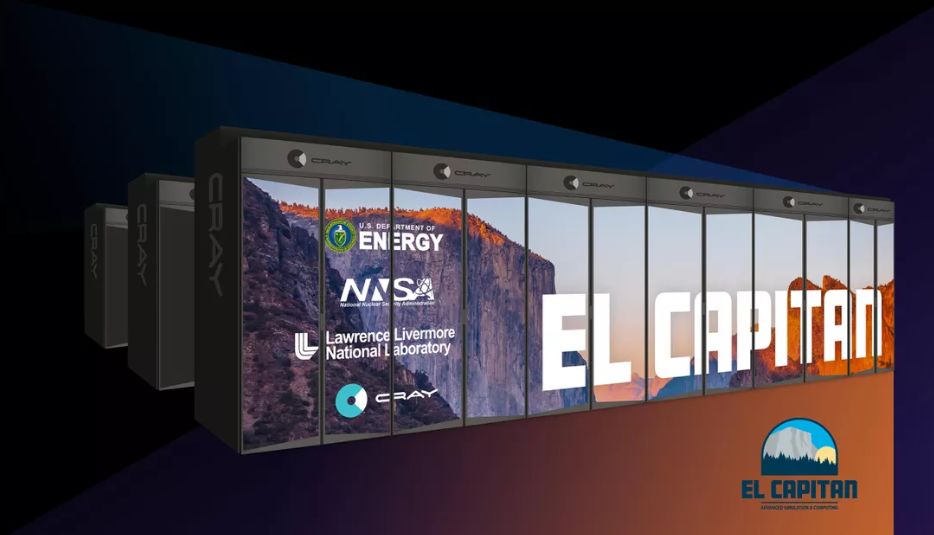 The U.S. Department of Energy (DOE) and the National Nuclear Safety Agency (NNSA) recently announced that Cray's Supercomputing Platform will become the backbone of El Capitan.The new leading supercomputer in the U.S. Arsenal will reach 1.5 EP, 10 times faster than the fastest supercomputer available.

1. El Capitan's calculation will reach 1.5EP. CPU/GPU configuration has not yet been disclosed.

El Capitan will use AI and machine learning to perform 3D simulation tasks at unprecedented scales and speeds, and at resolutions that are virtually impossible for existing supercomputers.Current supercomputers can perform up to 400 PETA FLOPS and provide continuous computing power at the 200 PETA FLOP level.(1E = 1000P)

Of the 10 fastest supercomputing units in the world, 4 are owned by the U.S. Department of Energy. The department has awarded $600 million worth of contracts to Cray to build systems based on Shasta architecture, Slingshot interconnection and software platforms. The system is for the rest of the Department of Energy under construction.

Where Aurora is equipped with an undisclosed

It is also uncertain whether Nvidia's GPU will appear in El Capitan.It's strange that the U.S. Department of Energy hasn't decided which company El Capitan will use, because performance forecasts have been published and the over-calculation design seems to be in the final stages, but as far as we know, the architecture El Capitan will use will follow the GPU and CPU of the Shasta platform architecture. Standard combination.

The Shasta architecture currently supports only Intel, AMD, and Nvidia CPU / accelerator, so it seems unlikely that IBM's POWER or ARM processors will be used. Cray, the manufacturer, said it would publish the CPU and GPU used by El Capitan later.

Power consumption is only 40 MW and energy efficiency is increased four times.

It's the best way to calculate,Because the U.S. Department of Energy has yet to announce which processors and GPUs El Capitan has about 40 megawatts of power and four times the efficiency of Sierra, the fastest supercomputer in the organization. Efficiency improvement is mainly the result of network, water cooling and software optimization (AI / ML).

At last year's Supercomputer Conference, we had the opportunity to observe the Shasta platform at close range. The U.S. Department of Energy has yet to reveal how many racks El Capitan will use. If the excess blade rack is connected from end to end, it will be three times longer than the 3,600-foot El Capitan peak in Yosemite National Park.This is where the name of the overcalculation comes from. 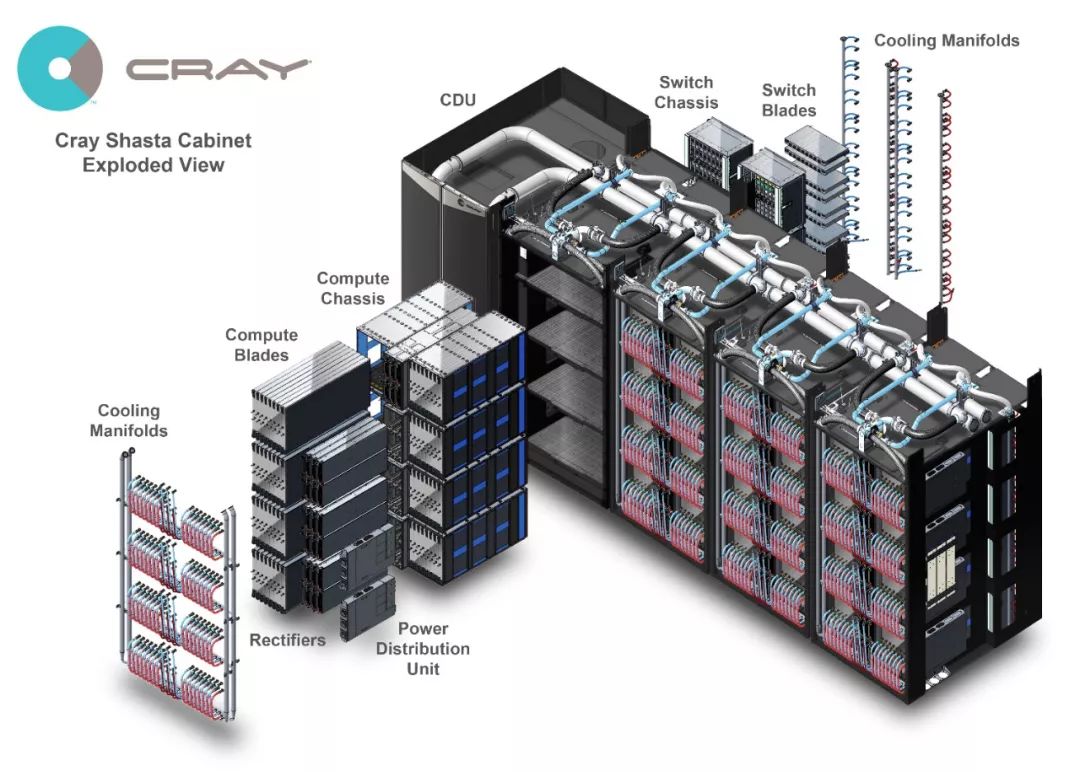 El Capitan will compute blades using Shasta with four nodes. Each node can currently accommodate up to eight computational slots and a complete memory DIMM and network. Cray, the manufacturer, has indicated that its current generation of Shasta CPU, GPU and network blades will not continue to be used in Frontier overruns. It is not clear whether El Capitan's power source is Cray's current or next generation computing technology. 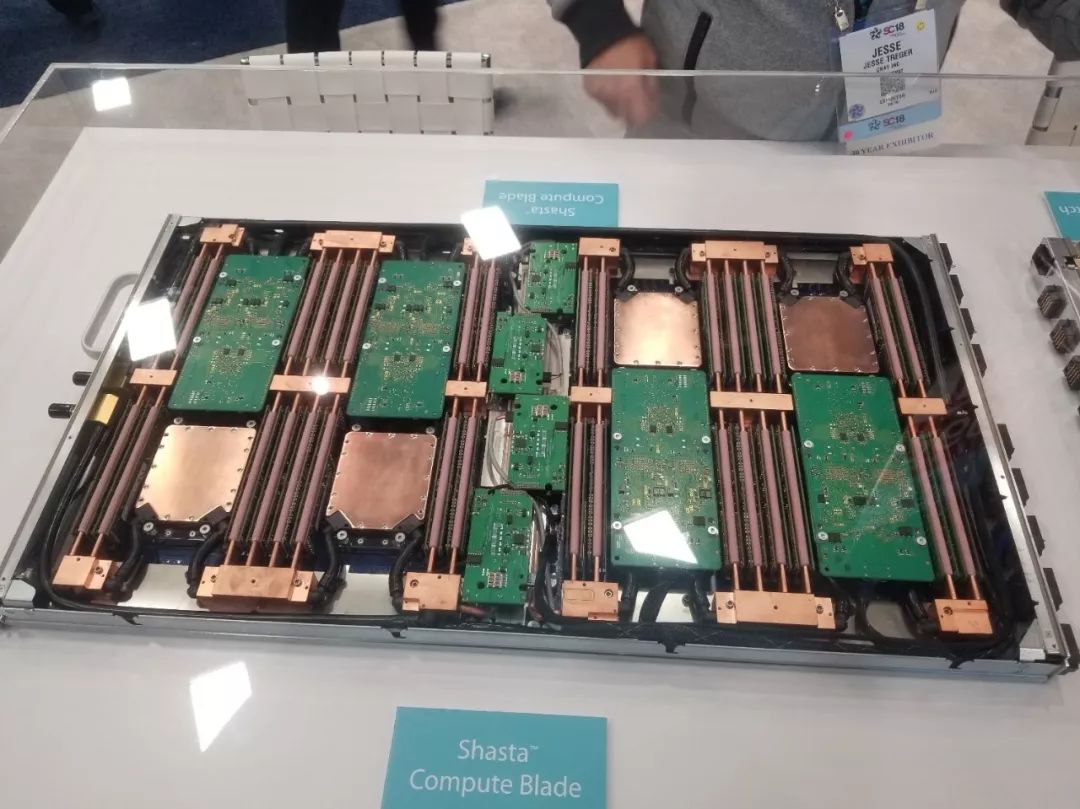 Like the current generation, Cray will use its proprietary Slingshot architecture to connect nodes to integrated overhead switches, including Cray's ASIC, with data throughput of 200 Gb/s per switching port. The network architecture uses enhanced low latency protocol and intelligent routing mechanism to alleviate congestion. Optical link interconnection is also supported. The system will be used in conjunction with future versions of the ray CluserStor storage service.

Cray will also develop a new software stack that can be deployed as soon as the ElCapitan is fully built. Cray is working with all relevant organizations to build a

The construction of El Capitan marked another huge victory for Cray, the overweight manufacturer, which has now received a total of $1.5 billion in orders for Shasa. El Capitan, Aurora and Frontier will compete together for the world's fastest supercomputer list, which puts Cray ahead in the supercomputing competition.

In addition, the Shasta platform can also be used for deployment of standard data centers and high-performance computing platforms. Similar systems may soon appear in the data center, possibly right next to you.

Links to the original text:Https://www.tomshardware.com/news/el-capitan-supercomputer-cray-shasta-intel-amd-nvidia, 40142.html

Related news
The U.S. spent another $600 million to build E-class overruns, which came out in 2023 and counted for the world.
The linely group's best mobile processor of the year: God u Kirin 810 wins the title
"Generation God U" Kirin 810 gets The Linely Group's annual "Best Cell Phone Processor Chip"
U. S. cellular starts 5g millimeter wave deployment with Nokia and Ericsson
Hot news this week
Qualcomm lobbied the US government to lift the ban on the sale of components to China
Tencent re racing e-commerce, but does not want to make the next pinduoduo
Wechat in Apple's Google App store may be banned. What if wechat can't be used on iPhone
Tencent's response to wechat ban issued by the United States: under evaluation
Foreign media revealed White House documents: the ban may make apple and Google "off the shelves" tiktok
Xiaomi 10 supreme commemorative edition press conference Lei Jun's live rehearsal
After the sesame seed, Alipay's "financial points" is officially launched: let's see how much you have.
The United States blocked tiktok and wechat one after another: This is the real purpose!
Tencent launched the largest school recruitment in history, and these positions are most popular
Votebymail is dedicated to helping American voters easily apply for postal ballots
The most popular news this week
Understanding Xiaomi's AB side in ten years with 12000 words
Huawei surpasses apple to win the first place
Samsung Galaxy Tab S7|S7 the launch of a new generation of flagship tablets
Samsung launches Galaxy budds live Bluetooth noise reduction headset: from 1199 yuan
Blood oxygen electrocardiogram monitoring Samsung announced Galaxy Watch 3 price of 2999 yuan
Samsung releases Galaxy Note 20 series of mobile phones :12 512GB emperor's edition 9999 yuan
Blue light not only hurts the eyes: it can also increase the risk of depression
Is it feasible for Huawei's "Tashan plan" to beautify 45 / 28nm production line?
Huawei is just 30
Net profit of Netease in the second quarter was 5.2 billion yuan, up 33.3% year on year