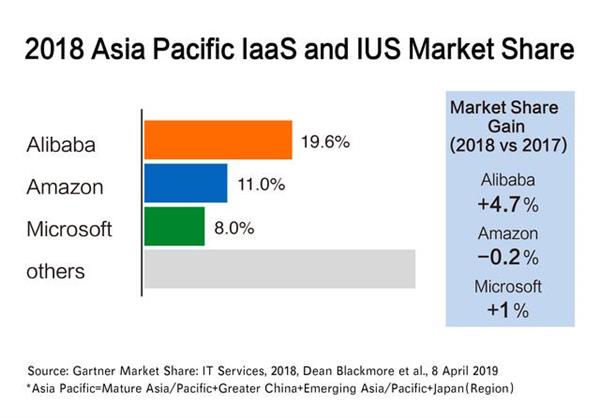 According to public information, Alibaba Cloud supports millions of customers in more than 200 countries and regions around the world, and is ranked in the top five in the global cloud computing market.cloud serviceThe only Chinese company in the business. In the past five years, the global cloud computing market head players have changed five times. Alibaba has replaced traditional IT vendors such as IBM and Rackspace to become the world's third. According to Gartner data, in the past year, Alibaba Cloud's global market share has nearly doubled, and it is “sitting three and two” in the global market.

Related news
How much is Google Cloud worth?
Huawei Cloud Major Change: Cloud
Hot news this week
Britain and China are discussing involving Chinese enterprises in the construction of high-speed rail in the country
Amazon employee No.1: the giant is unstoppable, but there is evidence for the split
100% full screen? Samsung Galaxy note 20 first exposure: or in July
Xiaomi tmall super brand day ultimate battle report: the first sales volume of 61 items sold for 300 million yuan!
US announces import tariff on EU aircraft Airbus: Eventually will be paid by U.S. passengers
Paper clip Cope millet 10: Why is your home's Wi-Fi so slow?
It's worth a try to use the mobile phone with homogeneous appearance
Musk confirmed that the new Tesla Model s and model x range increased to 630 km
[multi figure] learn about the windows 10x system for dual screen devices
Fold for fold: is Motorola Razr really a 100% mobile phone?
The most popular news this week
Mattel announces the remote control version of Tesla cybertruck
Nail households finally take off their hats! Xiaomi 6 users change Xiaomi 10: Lei junbixin
U. S. cellular will use Samsung devices to promote 4G LTE and 5g networks
Netflix's rapid growth in the U.S. market slows down, aiming to seize the opportunity in the international market
Google to further update redesigned Google Maps
Reports claim the Trump campaign bought a headline ad space for YouTube on Election Day
Xiaomi appoints Wang Chuan as chief strategy officer Lee Hsiao-hsung takes over the DIRECTOR
NASA's MRO captures strange craters on Mars
Patent leak: Apple's new iPhone design is all screen
What is the richest town in America? Half a million dollars a year is less than the average