Harvesting more than half of the population in underdeveloped areas, how much dividends are there in the sinking market?

Whether it's with the e-commerce platformJD.COMCompared with Tencent, the other pole of China's Internet giant, Ali's financial figures reflect that it still maintains a relatively strong growth capacity under a large base.

But it's not entirely comfortable. Compared with Ali in the past, its revenue growth of 42% is the lowest in nearly two years, and as the core business of Ali is the only profitable business, the growth of e-commerce business is also slightly weak, from 58% in the second quarter of 2017 to 44% in the current quarter.

As a giant of Chinese Internet companies, how will Ali dance in the future?

In the current quarter, Ali's core e-commerce business revenue was 99.544 billion yuan, up 44% year-on-year, and the growth rate further slowed down.

Ali's e-commerce revenue comes from two parts, namely commission income (which mainly collects transaction commissions from Tianmao merchants) and customer management income (online advertising), both of which are at a low growth rate. Among them, commission income only increased by 23%, which is the slowest growth in the past two years. 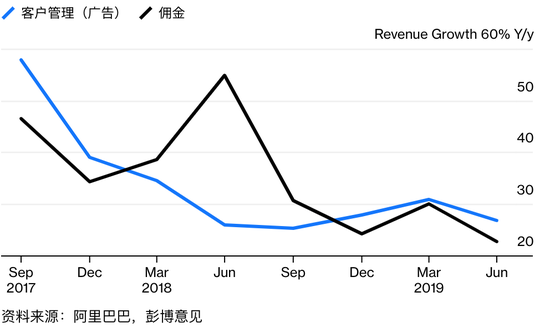 In order to stimulate consumption and growth, Ali began to learn to spell more, to achieve personalized recommendation services for e-commerce.

Pingduo once grew rapidly by pooling and bargaining, but its founder, Huang E, thinks that the model of pingduo is more like headlines. "You can imagine that the exchange of information under the headlines into commodity flow is pingduo." In short, the headline achieves the accurate recommendation of information flow, while Pingduo wants to achieve the accurate matching of commodity flow.

At the end of August last year, Taobao made a major revision, abandoning the home page and insisting on the category recommendation for many years. The information flow section "Guess what you like" was upgraded to the second screen of the home page, in order to achieve a precise match with consumers and increase consumer purchases and advertising revenue.

The revision soon brought results. Jiang Fan, president of Taobao, said publicly that last year Shuang11, the traffic based on Personalized Recommendation had exceeded that brought by search and other means.

"Although the macro environment is not as good as last year, Alibaba has launched many new initiatives, and personalized services help to maintain its growth rate." Bloomberg quoted analysts as commenting.

Not only that, Ali is also looking for new assets to further expand the growth path. Caixin reported on August 15 that Alibaba's purchase of NetEase Koala has been confirmed, the transaction is worth $2 billion, Alibaba will pay in full cash, and the two sides will carry out other forms of cooperation and transactions in the future.

Ali Tianmao International Business and NetEase Koala belong to the first and second rankings of Haitao market respectively. Once the acquisition is achieved, Ali Haitao Business will lose a strong competitor and will occupy the dominant position in Haitao market.

2. Digging the Dividend of the Falling Market

Statistics show that consumption growth in rural areas is significantly faster than that in urban areas. Therefore, the sinking market is still the focus of competition among e-commerce giants, and is another important way for Ali to grow in the future.

Over the past two years, when Pingduo rose rapidly from the sinking market, Alibaba's new active buyers in each quarter were lower than Pingduo, but in addition to the second quarter of 2017, they were higher than the growth of Jingdong users. 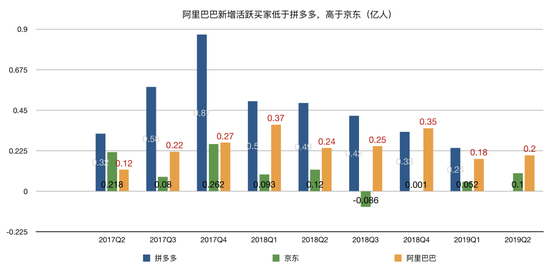 How to continue to grow in the declining market? "Ali has a series of products with promotional functions, such as cost-effective, daily discounts and so on. These are very effective promotion platforms. Users of third and fourth-tier cities can find these products more easily." Zhang Yong said.

In March this year, Ali announced that it would maximize the integration of cost-effective gathering, day-to-day sale and purchasing, forming a new sales platform of Tao Department to divide up the sinking market.

3. The Future of Cloud Business Relations

Among Ali's businesses, cloud computing has the fastest growth rate, but it has been declining year-on-year for six consecutive quarters - an increase of 66% to 7.787 billion yuan, accounting for 6.78% of Ali's overall revenue.

But in the global market, Ali has more competitors and is very strong. According to Gartner, the research and analysis organization, at the IaaS level, AWS accounted for 47.8% of the total in 2018, ranking first, and Aliyun 7.7%, ranking third. Others areMicrosoftInternet giants such as Google and IBM.

At the performance meeting, Alibaba said that at present, more than half of China's A-share listed companies and 80% of China's science and technology enterprises use Alibaba.Cloud services。

In fact, cloud business is not only about enterprise services, its technology can also make Ali know more about businesses and users, so as to better profit from it. As Ali said at the performance meeting, "Ali's performance is not only from user growth, partly because of improved algorithms to better connect buyers and sellers."

At present, Aliyun is still in the loss stage. The adjusted tax and interest depreciation and amortization loss was 358 million yuan, twice the loss in the previous quarter.

In September this year, Zhang Yong will officially replace Ma Yun as chairman, and Alibaba will usher in the post-Ma Yun era.