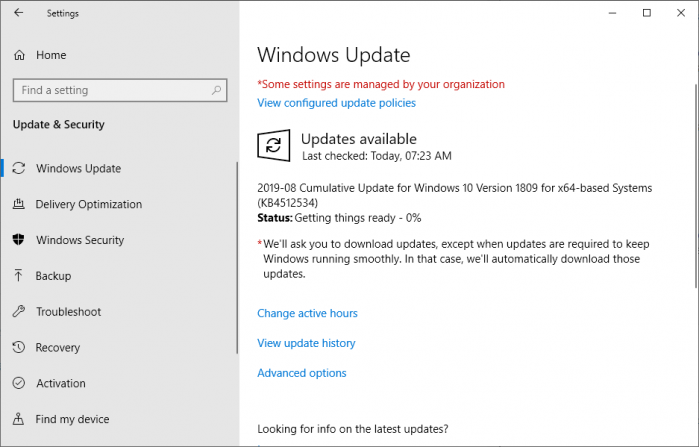 Windows 10 KB4512534 is an optional update that can be downloaded by manually checking for updates.MicrosoftIndicates that the cumulative update can be downloaded from Windows Update, the Microsoft Update Catalog website, and the organization's WSUS.

According to Microsoft's official update log, Windows 10 KB4512534 primarily fixes issues that cause some applications to stop responding when created with Visual Basic (including Visual Basic Scripting Edition).

The affected application may pop up with an error alert indicating an invalid procedure call error. This problem exists on all supported Windows 10 systems, and has been fixed in older Windows 10 versions. Build 17763.720 also fixes Visual Basics bugs in the October 2018 update.

This issue persists in Windows 10 version 1903, but the company says it is investigating this issue and will distribute the fix in an upcoming release.

The August 17 update also addresses issues affecting certain digital media downloads in Microsoft Edge and Internet Explorer. Another problem with the fix is ​​that the PDF file is configured to open only through the Edge browser.

Microsoft acknowledges that it is investigating several known issues in this release, including errors that may cause temporary black screens. If you see a black screen after installing the update, you can restart your PC by pressing Ctrl + Alt + Delete and selecting the power button.

Related news
Windows 10 October update won KB4512534 update: rose to Build 17763.720 (Figure)
Hot news this week
Britain and China are discussing involving Chinese enterprises in the construction of high-speed rail in the country
New patent exposure of magic mix alpha millet: screen accounts for over 100%
Foreign netizens talk about Xiaomi 10: half cheaper than Samsung S20 with similar configuration and reasonable price
Data shows that global wafer production capacity is monopolized by Samsung TSMC and other manufacturers
Huawei: no cooperation with crypto Ag and other companies under the control of CIA
100% full screen? Samsung Galaxy note 20 first exposure: or in July
Global wafer capacity is monopolized by Samsung TSMC and other domestic CPUs / memory, which is too difficult
Amazon employee No.1: the giant is unstoppable, but there is evidence for the split
Xiaomi 10 series international edition will be postponed after MWC is cancelled
Alipay combined with a number of service providers push support plan catering businesses can get free online business services.
The most popular news this week
Support 50W fast flash charging Xiaomi mobile power supply 3 super flash charging version evaluation
China's export of auto wiring harness cannot be supplied: Hyundai plant only started one day and announced to continue to shut down
Huawei releases "5G Best Web "solution Base station power can be reduced by more than 15%
Internet medical beauty platform "more beautiful app" sued by actor Qin LAN: apologize and compensate 50000 yuan
Amd announces the secret of 7Nm zen2 "small chip": reduce the manufacturing cost of 64 cores by 50%
US scientists announce the key step to create the first new coronavirus atom map for vaccine development
Huawei announced 91 5g contracts and will invest 20 million US dollars to support 5g applications
10 years after its launch, Sony closed its official mobile phone website and Forum
Huawei releases 20205G new products and solutions Obtained 91 5G commercial contracts
Xiaomi's products are on sale: from 4999 yuan