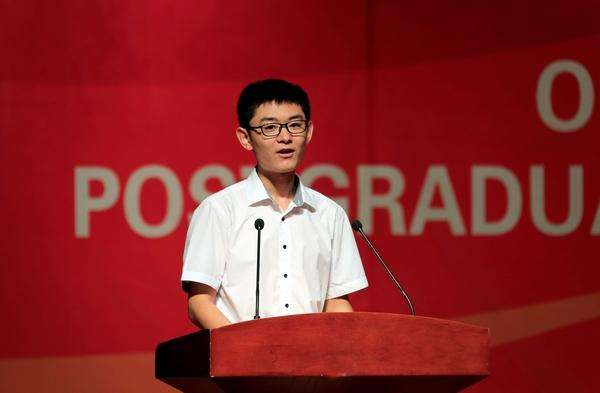 The news background of the sensational "5G voting gate" incident in 2018 is exactly the past two years ago.

Polar Code is not the result of Huawei's invention, but this is a new direction of channel coding proposed by Turk Erdal Arikan in 2008. Since then, there have been countless Chinese scientists who have been working late and immersed in it. Shen Yifei is one of them.

It is worth mentioning that this Chinese 5G core technology scientist who has made outstanding contributions is only 22 years old this year.

At the age of 15, Shen Yifei took the college entrance examination and was admitted to Wu Jianxiong College of Southeast University, one of the three “juvenile classes” in the country. He studied information science and engineering, and all 19 professional courses were all over 90 points. Wu Jianxiong College was established in 2004. The only young student who has been ranked first in the grade.

Shen Yifei's information and communication engineering major belongs to the ICT industry.In the seven industry competitions between China and the United States, the ICT industry is the most important industry and the underlying technology of contemporary industry. This explains why the United States is so jealous of Huawei's rapid growth and can explain China's key in this technology field. How significant is the breakthrough.

At the age of 18, Shen Yifei was sent to the School of Information Science and Engineering for postgraduate studies with the first grade. He entered the door of Professor You Xiaohu, who is known as the head of China's 4G technology, and entered the National Key Laboratory of Mobile Communications, focusing on the most important polarization code technology in 5G technology.

The research topic that Shen Yifei was assigned to is to build a high-efficiency platform based on general-purpose processors. After a full semester of research, his efficient polarization code platform evolved from a two-second calculation of a set of data to a calculation of 200,000 sets of data in just one second, leading the global team. In 2016, Shen Yifei won the Best Student Paper Award after a rigorous selection by the IEEE's top reviewing committee.

What concept is this? One of the biggest and most important problems in communication is the latency issue. In many future applications of 5G, such as driverless, industrial automation control, high requirements are placed on the delay of communication.

The biggest advantage of Polar Code polarization code compared to high-power push LDPC code is ultra-low communication delay.This is also the value of the research results of Shen Yifei's team.

At present, the Shenyifei team's polarization code scheme is officially written into the 5G industry standard. At the same time, he accepted the invention of three patents to build technical barriers for European and American companies, which indirectly prompted China's 5G commercials to land one year ahead of schedule.

We often say that China's communication network development has experienced "1G blank, 2G follow-up, 3G breakthrough, 4G run, 5G lead". The reason behind this is that China has independently developed TD-SCDMA technology in the 3G era, but it cannot be Qualcomm. CDMA technology is comparable; in the 4G era, China's TD-LTE technology has made some breakthroughs, but the core long code code Turbo code and short code tail biting convolution code are still not original in China.

We need to thank Huawei for letting the international know the volume of China, but more need to thank the behind-the-scenes heroes like Shen Yifei, giving Huawei the confidence to master the right to speak.