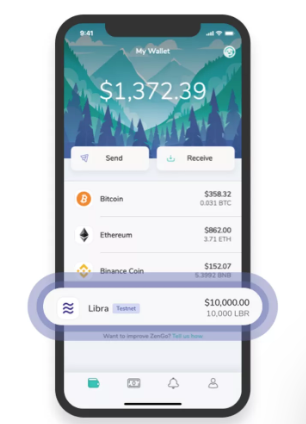 "getting to know it as soon as possible may inspire some new ideas that will give you a step ahead of Libra when it really comes into operation," ZenGo said in a blog post. Users can experience Libra, by going to the account label in the ZenGo application, which is currently availableUser's use. The wallet can also allow a user to purchase bitcoin, an Ethernet currency, and a currency by way of a credit card or Apple Pay.

Since the announcement of Libra by Facebook, the company faces the harassment of U. S. lawmakers who are worried that the encrypted currency will be abused by criminals and have a negative impact on the dollar. David Marsus, the Facebook's Libra head, said at a congressional hearing last month that the social network company did not roll out Libra until all the issues were resolved, but he did not agree to suspend it.

Facebook unveiled Libra in June. Unlike many other encrypted currencies, Libra reserves will hold secure assets in a basket of currencies, so the value will not fluctuate significantly. Libra Association, the agency that will manage Libra, has yet to say what these assets will be, but it shows that they include major global currencies, such as the dollar and the euro. Libra has met with opposition from regulators and politicians around the world.

ZenGo will compete with Facebook's planned digital wallet, Calibra, launched in 2020. But the advantage of Facebook is that it already has 2.4 billion active users. Users can download Calibra applications to an iPhone or Android device, or add digital wallets to messaging applications like Messenger or WhatsApp. Calibra wallets can also be used with other Libra-enabled wallets. Users need to upload ID such as driving license to verify their identity.

ZenGo, who plans to release Android applications, says users can create digital wallets by downloading applications and providing e-mail. Users don't need private keys either. ZenGo users scan their faces to back up their wallets. ZenGo said it was Libra's "non-custodial" wallet, which meant that users could control their money completely without relying on third parties.