Tesla showcases the third generation of on-board computers: the dual redundancy of AI chips is 21 times faster than the old one 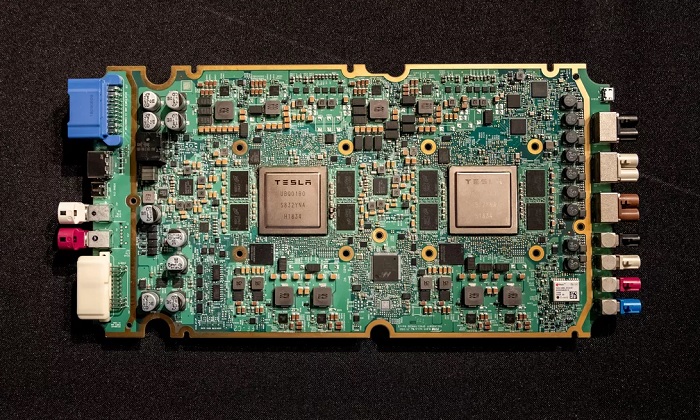 During the Hot Chips meeting, Tesla showed off the third generation of in-house car computers. As the brain of autopilot AI, the new model runs 21 times faster than the old version. In addition to speed, security has been an important concern for the company. Although the design of the chip is very difficult, Tesla has been actively engaged in the development of autopilot. In April this year, the company CEO Elon

At today's Hot Chips conference, chip designers introduced Tesla's response to optimizing the performance of this custom AI chip. Compared with the old Nvidia chip, it has increased 21 times and cost only 80% of the former. In order to achieve the goal of fully automated driving, the company obviously needs better and stronger hardware, otherwise it can only stay at the level of high-speed cruise in simple road conditions, as well as the identification of parking signs and traffic lights.

Ganesh Venkataramanan, a former AMD employee and one of the chip designers, said:

This major effort is reflected in the huge number of transistors ($6 billion). Tesla has invested a lot of expertise in everything from processors, software, battery manufacturing, and charging posts.

Pierre Ferragu, an analyst at New Street, said in August that, as a core advantage of the company, other auto manufacturers clearly find it difficult to compete because the business model does not allow the use of expensive on-board accessories. As a result, the traditional automobile companies will be greatly discounted on the technical level, because they rely too much on suppliers and can not closely integrate hardware and software and control. In other words, Tesla helped set an industry standard for Volkswagen.

It is worth mentioning that in order to improve the security, Tesla used two sets of AI chips redundant design for the on-board computer. The power supply and data input components of the chips also considered redundancy. Even the camera is connected to two separate sets of power supply to avoid malfunction.

Venkataramanan said that redundant design ensures that components such as sensors, cameras or power supply fail and avoids any adverse events caused by system anomalies.

Each chip evaluates what the car should do next, and the computer compares the two evaluations. If the judgement is consistent, action can be taken. If there is inconsistency, the onboard computer will discard the video data and try again. Obviously, that's one of the reasons Tesla wants to build a powerful AI chip that can handle such a huge amount of video frame data. Each AI chip runs at 2 GHz and can perform 36 trillion operations per second.

For example, the chip processes data recorded as 8-bit integers rather than 16-bit floating-point data, which is more common in AI tasks, but still requires more computing power. On the other hand, chips can only handle extremely limited instruction sets.

Das Sarma points out that it has a huge 32 MB high-speed SRAM cache on the chip, which means it does not need to retrieve data from slower traditional dynamic random access memory (DRAM).

We want to focus most of our energy on really useful designs, not on extravagant spending. For example, although Tesla designed the core AI elements of the processor, it relied on ready-made elements for graphics processing.

It is reported that the new AI chip took the company 14 months to design, and Samsung is currently working on its processor. New owners are expected to use third-generation on-board computers, but old Tesla owners also have a chance to upgrade.

Related news
Hot Chips Summit Lisa Su Lecture: The new thread tearer is on the road
Tesla showcases the third generation of on-board computers: the dual redundancy of AI chips is 21 times faster than the old one
NVIDIA Tesla v100s low-key release: full speed up to turn into Tu Haojin
Intel joins chips alliance and provides advanced interface bus
Airpods X generation? 399 dollars!
Hot news this week
Wechat has not done this function for N years! Use this app to make up for the defects of wechat
Gree's response to "being disqualified from winning the bid": a mistake made by the bidder in sorting out the materials
Apple wants to know: what do you do with the charging head of the old iPhone?
IPhone 12: it's more like throwing away the charger
Luo Yonghao comments on ideal one: Tesla Model 3 is not a car of a level at all
ASUS main board leads Rog day fans Carnival highlights
A 400-brand evacuation Facebook： the internet giant strangled?
How long can "Laoganma" carry on after winning Tencent?
The dotcom bubble? U.S. technology stocks surpassed their 2000 highs relative to the S & P 500
Tesla's warranty service suddenly shrinks: touch screen and media control unit halved to two years
The most popular news this week
"God of war" director supports the price increase of genuine game by netizens
How hard is it for Tesla Model 3 owners to protect their rights?
Crack down on pornography and illegal websites: Youku iqiyi is severely punished for vulgar information and uses microblog to spread "yellow" phenomenon
Samsung Vice President: can provide a new independent 5g network to the UK
Huawei nova7 pro and luotianyi create exclusive campus memories
ARM version of Mac computer is closing down: Thunderbolt 4 left out
Us wildlife service sent a picture to many netizens: where is the puma in the picture?
5g mobile phone: the first sale of glory 30 Youth Edition is sought after by young people
U. S. new coronary pneumonia cumulative diagnosis of more than 3.05 million! Almost 60,000 a day
Huawei CIO: the fourth industrial revolution has come and mankind will speed up its entry into the Internet of all things