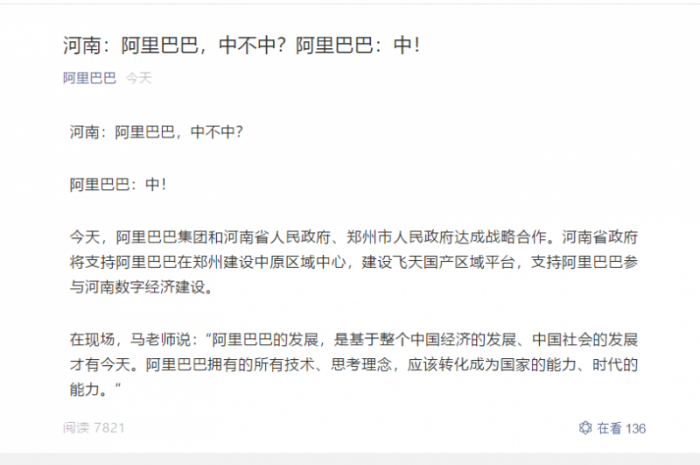 According to the agreement, the Henan provincial government will support Alibaba to build the Central Plains Regional Center in Zhengzhou, build a flying domestic regional cloud platform, and support Alibaba's participation in Henan's digital economy.

Henan Provincial Party Secretary Wang Guosheng and Governor Chen Runer pointed out that with the chairman of Alibaba Group Chairman Ma Yun and his party, Henan is a large province with a large population and a large network. It has abundant human resources and data resources, and has great potential for developing digital economy. broad. It is hoped that Alibaba Group will continue to leverage its advantages in platform, technology, talents and capital to carry out more comprehensive and in-depth cooperation with Henan.

Henan has a total population of more than 100 million, ranking third in the country. The combination of population size and local industrial advantages provides unlimited potential for the development of the digital economy. In 2018, the digital economy of Henan Province reached 1.25 trillion yuan. By the first half of this year, there were 107.83 million Internet users in the province.

Enterprises, entrepreneurs and young people from Henan have grown rapidly on the Alibaba platform and have become a new force in the development of the digital economy. In 2018, Zhengzhou broke into the first phalanx of “Into Amoy”, which is one of the ten cities with the largest number of new Taobao stores in the country. In the countryside, the agricultural products of Henan Province passed the Alibaba platform sales of more than 10 billion yuan in the past year. It increased by 94% year-on-year. As of the end of June this year, Henan has produced 75 Taobao Villages and 44 Taobao Towns.

Digital public services have created more happiness for the lives of Henan people. Now, Zhengzhou citizens use the Alipay brush code to take the bus,Mobile phoneYou can get social security and provident fund services without leaving your home.