Ziguang Guowei smart security chip business revenue of 600 million yuan in the first half of the year, an increase of 30.3%

[TechWeb] August 22 news, Shenzhen Stock Exchange listed company Ziguang Guowei (SZ002049) released the 2019 semi-annual report last night. According to the report, Ziguang Guowei achieved revenue of 1.56 billion yuan in the first half of this year, a year-on-year increase of 48%. Among them, the smart security chip business revenue of 607 million yuan in the first half of the year, an increase of 30.32%. 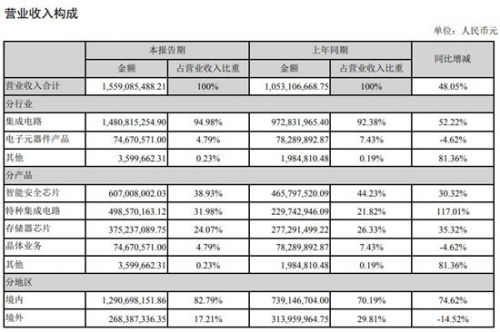 Ziguang Guowei said that in the first half of 2019, the global telecom card market entered an adjustment period, and the demand for traditional cards declined slightly. Among them, the competition in the low-end card market is still very fierce, and there is room for improvement in the high-end card market; Demand continues to grow. In the field of traditional card chips, Ziguang Guowei has been stably shipping in the low-end and mid-end card markets, and shipments in the high-end card market continue to grow substantially, and overall shipments have steadily increased. At the same time, the company continued the advantages of the IoT security chip field and once again harvested M2M orders in large areas.

In addition, Ziguang Guowei promoted the development of eSIM, signed a strategic cooperation agreement with Unicom Huasheng and Unicom Internet of Things, and launched multi-dimensional cooperation around the intelligent security association. With the promotion of operators, the demand for IoT security chips has surged.

Ziguang Guowei identity security products include the second generation of resident ID cards, transportation card chips, residence permit chips and electronic licenses. In the first half of 2019, the company's second-generation resident ID card supply increased steadily; with the large-scale expansion of the transportation card standard of the Ministry of Communications, the company's transportation card chip showed a rapid growth trend; the residence certificate chip products continued to ship. In addition, the company has received large orders in new application markets such as electronic licenses, becoming a new growth point.

Among them, the special integrated circuit business revenue was nearly 500 million yuan, an increase of 117.01%. The main products of the special integrated circuit business include: microprocessors, memories, programmable devices, buses, interface drivers, power management and custom chips, and nearly 700 varieties in seven categories. Ziguang Guowei revealed that a new generation of large-scale programmable device FPGA series products has been developed.

Ziguang Guowei said that during the reporting period, the storage industry entered a down cycle and product prices continued to fall sharply. The company's DRAM memory chips and memory module series continue to be stable in terms of servers, personal computers, set-top boxes, TV sets, etc., and have grown steadily in the domestic computer application market.

Ziguang Guowei said that during the reporting period, the company's FPGA (Field-Programmable Gate Array) chip business continued to improve the product model of the Logos series of cost-effective and Compact series CPLD, while actively promoting Titan, Logos, Compact The application and industrialization of a series of products are being shipped in batches in the communications, industrial control and consumer markets. The development of a new generation of FPGA products based on the 28nm process is progressing smoothly, and functional and performance verification work has been completed, and it is expected to be brought to market as soon as possible.