Ren Zhengfei accepted an interview with the Associated Press: Sacrificing the interests of the poor people to save China. My conscience can't go! 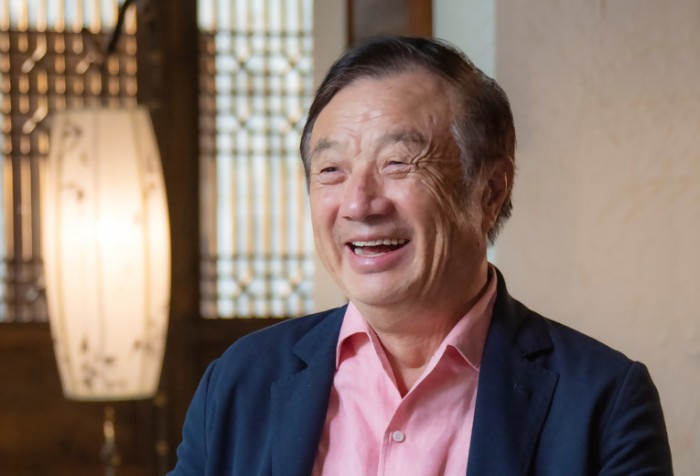 Ren Zhengfei also said that if China is required to make concessions in the tariff war, he does not want the United States to relax the sanctions, even if it means that the daughters who are under house arrest in Canada because of criminal charges in the United States will face a longer legal battle.

He says,"As for the extension or non-prolongation of the 'temporary license', it has little impact on Huawei. We can live well without relying on the United States.”

Huawei Technologies Co., Ltd. is China's first technology brand to go global. Currently, the company is at the center of a trade war and technology war that could put the global economy into recession. The company is also the second largest smart in the worldMobile phoneBrand. US officials accused the company of stealing technology and helping China carry out espionage, but Huawei denied the allegation.

Huawei’s chief financial officer and daughter of Ren Zhengfei are facing US allegations of violations of Iran’s trade sanctions and extradition requests. She is fighting for not being extradited to the United States by Canada.

The interview is in a buildingbeautifulEuropean neoclassical style building. Here is the place where Huawei receives customers. Ren Zhengfei has always been relaxed and confident in the two-hour interview. The atmosphere at the scene was a far cry from the press conference on June 17. Mr. Ren compared Huawei to "bad aircraft" and predicted that Huawei's mobile phone sales in the next two years may fall by $30 billion due to US sanctions.

Trump hinted that if Beijing agrees to reach an agreement on trade agreements and technical disputes, it may be possible to lift restrictions on Huawei. The United States is adding tariffs on Chinese products. However, Ren Zhengfei rejected the proposal. He said: We must not sacrifice the interests of the poor people to save China.

Huawei's sales in the first six months of this year increased by 23.2% year-on-year. In July, Chairman Liang Hua said that Huawei is reviewing core products to ensure that core products can still be delivered to customers without US components.

Ren Zhengfei said: "The US 'physical list' is helpful to Huawei because the strategy clearly cuts off products that are not important at the edge and brings them together on the main channel.He also said: "The entire company can focus more on the most competitive products. ”

This month, Huawei released its own smartphone operating system and claimed to be able to replace the widely used Google Android system. Huawei phones can still use Android, but Google is forbidden to provide support for other services such as maps and music. Earlier this year, Huawei released a chip that supports the next generation of smartphones and the first mobile phone based on this chip. But he said that Huawei wants to maintain with Google,MicrosoftAnd technical cooperation with other US developers.

Ren Zhengfei rarely made public appearances or interviewed reporters before his daughter was arrested in December. Since December, he has been interviewed by foreign journalists many times, trying to repair the company's reputation. “I think the interview is useful.”

When asked about the neighbors in Shenzhen, Hong Kong is launching a protest against democracy, Ren Zhengfei said that violence "is not good for society and people, but will not affect Huawei." "There is no impact on us," Ren Zhengfei said. "Huawei is doing a good job of making good holes in the bad plane.. ”

Ren Zhengfei claimed to be a fan of the United States, and he also publicly praised Trump as the leader. He said: "The strength of Huawei in the market will become a powerful company in the United States, because our products are also supported by American technology.. "If Huawei is banned from using Android, it is forced to develop other systems. "That would not be the best choice for the United States."

In fact, he said, the biggest impact is on Huawei, the world's largest network equipment manufacturer serving operators, which sells chips and other components.

According to the latest report, US listed companies lost $435 million in the second quarter. When analysts of US listed companies conducted financial conference calls, they analyzed that this was directly attributable to the US ban because the ban caused obvious confusion to national corporate decision makers and banned The long-term impact may bring greater losses to US companies.

Joy Tan, senior vice president of public affairs at Huawei, accepted an interview with the US media RCR Wireless News and said that when banned Huawei from bringing economic losses to the United States:

"Huawei's R&D subsidiary Futurewei in the US cut 600 employees and suspended plans to invest $600 million in research and development this year. The actions of Washington actually hurt American companies, and many companies in the value chain will be directly or indirectly affected.

Washington's actions will hurt operators in rural areas of the United States and hard-working Americans who rely on these rural operators. If the existing Huawei equipment is dismantled and replaced, it will take up to seven years and cost more than $1 billion. 』

Joy told reporters, "The government’s actions forced us to shelve these plans. The actions of Washington actually hurt American companies. Many companies in the value chain will be directly or indirectly affected. If the situation continues to develop, we will soon see its ripple effect.”

According to the latest report, the US ban has caused US listed companies to lose $435 million in the second quarter. Analysts of US listed companies conducted a second-quarter financial conference call, analyzing that this was directly attributable to the US ban because the ban on national companies Policymakers cause significant confusion and the long-term effects of the ban may cause greater damage to US businesses.

Huawei has not cooperated with any large US carriers. The company only provides network equipment for some rural and regional operators. These operators serve remote areas in the United States, and large service providers such as Verizon and AT&T do not cover these areas. The US Senate is considering actions to provide funds to these operators to dismantle and replace existing Huawei equipment. Joy said replacing equipment could take up to seven years and cost more than $1 billion.

"Washington's actions will hurt operators in rural areas of the United States and hard-working Americans who rely on these rural operators. If you want to call 911 in Montana or Eastern Oregon, the only reason the phone can be connected is the presence of Huawei devices. Schools, hospitals, farms, small businesses, etc. all rely on Huawei to achieve connectivity."

Huawei has signed more than 50 5G contracts with global operators, including operators in major Western European regions, such as the end-to-end 5G solution for Swiss service provider Sunrise. Although there are various concerns raised by the United States on the surface of cybersecurity and Huawei's relationship with the Chinese government, Huawei still conducts and leads a series of cybersecurity tests and verifications. These efforts helped the company's revenue in the first half of 2019. The increase is over 23%.

In response to the ongoing trade dispute between China and the United States, Joy said, "Some American politicians want to use Huawei as a proxy for China and become their target for attacking political interests. But Huawei does not want to be a bargaining chip... We hope As time goes by, we can clarify the truth. One can understand that Huawei is just a company that wants to connect with the world, a pure and honest company."

Ren Zhengfei said in depth to the reporter of the Associated Press, "Let the poor people give some benefits to the United States and save a rich Huawei. I can’t go through my conscience. Maybe my daughter will suffer more crimes, but I would rather do this than let the Chinese poor sacrifice sacrifices for Huawei's survival and development.”

Related news
Microsoft's garage application Read My World online: improve literacy rate in daily use (Figure)
Ren Zhengfei: If China wants to make concessions in trade, I would rather not let the United States relax sanctions.
Ren Zhengfei accepted an interview with the Associated Press: Sacrificing the interests of the poor people to save China. My conscience can't go!
I URGENTLY NEED MY EX BACK WITH THE HELP OF A SPELL CASTER
Hot news this week
China's second-biggest retail channel for smartphones in May Huawei is a step away
Huawei cloud's industrial Internet business experience: how to make the cloud serve the entire "circle of friends"?
After the total ban, the United States announced the arrest of Fujian Jinhua General Manager Chen Zhengkun!
Most people don't know that the hole at the bottom of the original mobile phone also has this function
Japanese legislation forbids walking and playing mobile phones: mobile phones in public places should stand still
A reporter from the United States who was infected with the new coronavirus took part in the trump campaign rally
Synergy Research released 2020Q1 China public cloud market report Baidu Intelligent Cloud stable third
Japanese media: invest 800 billion yuan in ten years, Tsinghua Ziguang self research memory will come out in 2022
Most people don't know that the hole at the bottom of the original mobile phone has this function
Is the market value of hundreds of billions of dollars really overestimated?
The most popular news this week
5g's first evolution standard announced completion of integration of Chinese wisdom into international standards
Microsoft's push Edge browser has turned users into angry Chrome
Facebook develops neural supersampling technology to counter DLSS
Apple will launch a new local gold iPhone 12: high end version only
Internet Association calls for no unilateral digital tax in future Anglo American trade agreements
Tencent after raising geese in Guizhou: we raise "chicken" in Qingyuan
really need a WiFi 6 router?
Microsoft launched Pylance improve Python experience in VS Code
Apple may launch new gold color for iPhone 12 Pro Max to complement bronze note 20 ultra
Rebound for four consecutive months, Nissan's sales in China exceeded 130000 in June: Xuanyi increased by 37%