Adobe announces that Flash updates will be completely stopped in 2020, and Web-side usage has been reduced to 17 per cent

According to IT House on August 23, Google Chrome users received a push message that Flash would stop the service. Chrome said in the article that Adobe has made it clear that it will completely stop updates to Web-side services such as Chrome by the end of 2020. Chrome said in the article that after Flash stops updating, Chrome will also completely remove Flash support, and HTML5 on Web will also replace Flash..

Over the past 20 years, Flash has witnessed almost the development of the Internet, from web games to video apps to online apps, and games such as QQ pets have been shut down with the end of Flash. 80 percent of Chrome users have visited sites with Flash in the past three years, but that proportion has fallen to 17 percent, according to Chrome.

Chrome said in the article that Chrome has been phasing down Flash over the past few years, from web prompts, to default shutdown, and finally to total removal, and that Chrome will remove Flash completely by the end of 2020. 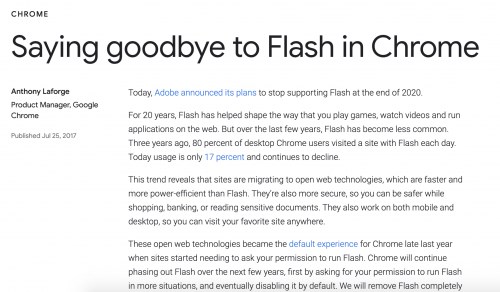 Related news
Google Browser starts popping up to remind users that Adobe Flash Player is about to stop supporting
Adobe announces that Flash updates will be completely stopped in 2020, and Web-side usage has been reduced to 17 per cent
Hot news this week
Xiaomi's new keyboard and mouse product: keyboard can't only be used for typing
$101.58 billion! China's integrated circuit exports hit a record high in 2019: processor accounts for 35.1 per cent
Fold for fold: is Motorola Razr really a 100% mobile phone?
Getting online is getting easier: Google announces the closure of the free Wi Fi project station
Intel headquarters cuts 128 employees, optimizes resources and closes low priority businesses
Lenovo Z664G to hand price $999:4000mAh/159g/7.97mm
Ali, Tencent join the bureau," health code "can really replace the pass?
Here comes the 7 nm sharp dragon! Lenovo released ideapad slim 7 amd version on the US official website
Novel coronavirus pneumonia CDC may be followed by China's suspension of work and suspension of school
US Wants to Limit TSMC Supply Huawei: Cutting Global Chip Supply Chain
The most popular news this week
Xiaomi invests in three semiconductor companies in succession: accelerating chip layout
Only after cleaning the keyboard can we know the origin of hyperx RGB game mechanical keyboard hardware strength
Lenovo releases windows 10 original image tool
Aung Rui microelectronics, an investment chip supplier of Xiaomi, accelerates the layout of chip field
The State Administration of radio, film and television donated Hubei again: 15 excellent TV dramas are broadcast free of charge
ZTE President Xu Ziyang: Developing 5nm Chip Power consumption is reduced by 20% per year
How many years has Tesla electronics been ahead of Toyota Volkswagen? Japanese media conclusion: 6 years
Xiaomi 10 Pro no longer snapped up: full pre-sale from 10:00 tomorrow
American man flies to the sky on a self-made rocket and falls to his death
Jingdong mobile phone goddess Festival Carnival: the highest 24 mobile phones are free of interest, as low as 2.78 yuan per day