Lei Jun boarded the news broadcast and revealed that Xiaomi's second 5G mobile phone was about to launch in China.

What's going on here? Starting in 2016, Xiaomi has emphasized making up classes, laying a solid foundation and certifying learning from traditional industries, Lei said. Second, it has increased R & D innovation and greatly increased R & D costs; and third, it has promoted fine management and promoted a large number of young cadres. 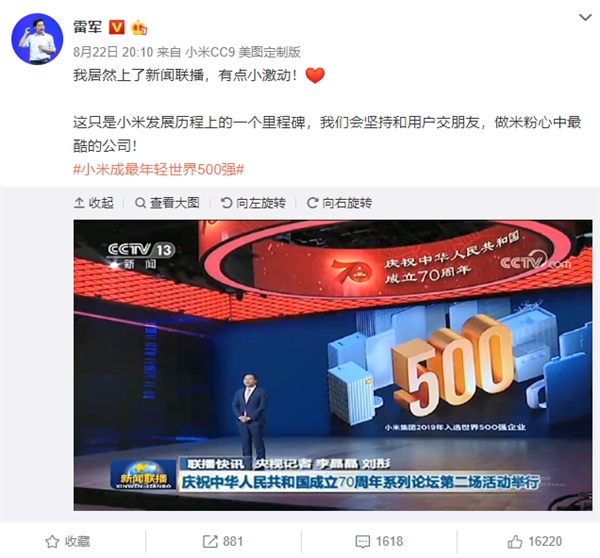 On July 22 th, Fortune magazine released the 2019 list of the world's top 500. Xiaomi, which has been founded for nine years, ranked 468 as a successor.JingDongAlibaba, the fourth Chinese Internet company to make the list after Tencent, is also the seventh Internet company in the world, and the fastest Chinese Internet and technology company to make the list.

Last night, Lei Junfa Weibo said: "I unexpectedly on the news broadcast, a little excited." This is just a milestone in Xiaomi's development. We will insist on making friends with users and making the coolest company in the heart of rice noodles. "

It is reported that the news broadcast is celebrating the 70th anniversary of the founding of the People's Republic of China series forum the second.Lei Jun answered questions from netizens at the scene and revealed that Xiaomi's second 5G mobile phone was about to launch in China..