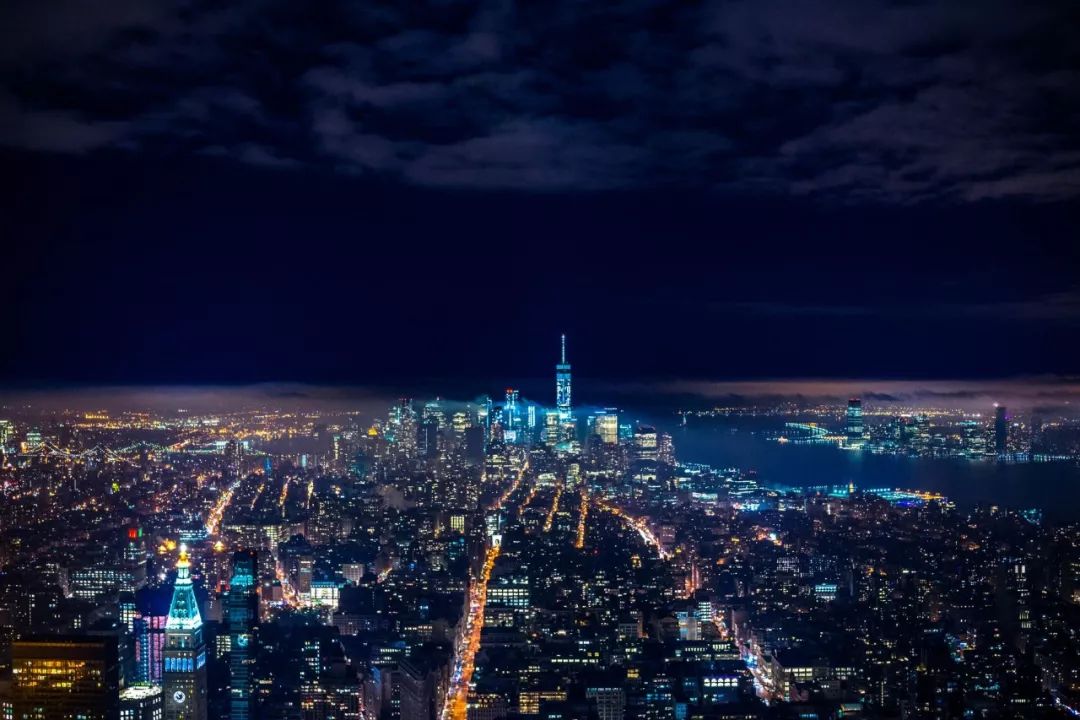 Angel is a distributed machine learning platform based on parametric server architecture of Tencent Open Source. It is dedicated to solving sparse data model training and large-scale graph data analysis. It is jointly developed by Tencent and Peking University, taking into account the high availability and academics of the industry. The innovation of the world. Currently, it is the Linux Deep Learning Foundation Incubation Project. Compared with similar platforms such as TensorFlow, PyTorch and Spark, she has the following characteristics: 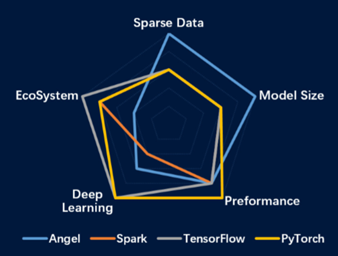 Angel's comparison with mainstream platforms in the industry

Since its launch in Tencent in early 2016, Angel has been used in WeChat payment, QQ, Tencent video, Tencent social advertising and user portrait mining.

In June 2017, Angel made a low-profile open source on GitHub. Open source for two weeks, this project has been harvested on GitHub 183 Watch, 1693 Star, 389 Fork, and attracted many industry engineers to pay attention and contribution.

In September 2018, Angel 2.0 was released, supporting the training of 100 billion model dimensions, and the algorithm library was also richer. The deep learning algorithm and graph algorithm were introduced for the first time. In the same year, Angel joined the Deep Learning Foundation of Linux (now renamed the LF AI Foundation), and in conjunction with the well-established operations of the Foundation, the fully upgraded Angel 2.0 continues to interact with the international open source community and is committed to making machines Learning technology is easier to get started with research and application goals.

Let's take a look at the new features that are worth paying attention to in the Angel 3.0 milestone.

The Angel 3.0 system architecture is shown below: 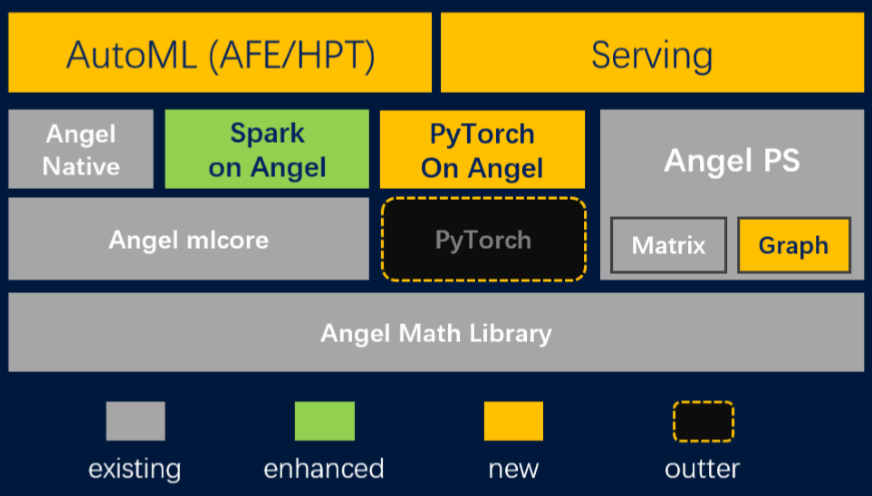 Angel's self-developed high-performance math library is the foundation of the entire system. Angel's PS function and built-in algorithm kernel are based on this math library.

Angel PS provides efficient, stable and flexible parameter storage and exchange services. In version 3.0, we extended the Angel PS functionality so that it can store any type of object. A typical example is the use of Angel PS to store a large number of complex objects during the implementation of the graph algorithm.

MLcore is Angel's self-developed set of algorithmic kernels that support automatic derivation and can be defined and run using JSON configuration files. In addition, in version 3.0, Angel also integrated PyTorch as a calculation engine. Above the Compute Engine layer are computational frameworks that can be thought of as a container for computational engines and currently support three computational frameworks: native Angel, Spark On Angel (SONA), and PyTorch On Angel (PyTONA), which can make Spark Switch seamlessly to the Angel platform with PyTorch users. The top level is two common components: AutoML and model services.

An overview of Angel 3.0 (red for new features, white for existing but continuous improvements)

The image above provides a holistic view of the Angel 3.0 features. Angel 3.0 attempts to build a full-stack machine learning platform with features that cover all phases of machine learning: feature engineering, model training, hyper-parameter tuning, and model services.

Angel's feature engineering module is based on Spark development and enhances Spark's feature selection capabilities, while feature feature intersection and re-indexing for automatic feature generation. These components can be seamlessly integrated into Spark's pipeline. In order to make the whole system more intelligent, Angel 3.0 has added the function of hyperparameter adjustment. Currently, it supports 3 algorithms: random search, grid search and Bayesian optimization. In terms of model services, Angel 3.0 provides a cross-platform component. Angel Serving, Angel Serving not only meets Angel's own needs, but also provides model services for other platforms.

Here are the iteration steps:

Finally, the composite features are stitched together with the original features. 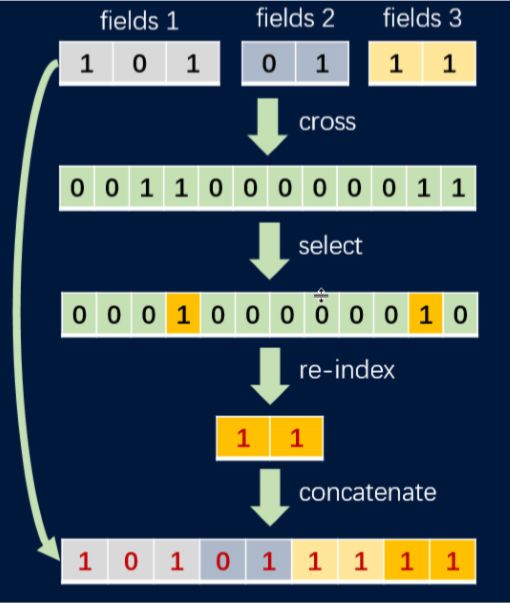 As shown in the figure above, this feature synthesis method linearly increases the number of features, avoiding dimensional disasters. Experiments on the Higgs data set show that the synthesized features can effectively improve the model accuracy (as shown in Table 1).

In Angel 3.0, we made a major optimization of Spark On Angel, adding these new features: 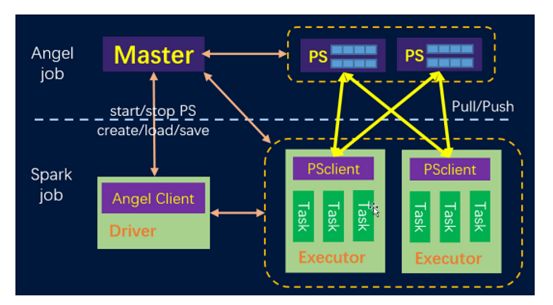 In addition to these large features, we are continuing to improve Spark On Angel's algorithm library: new algorithms such as Deep & Cross Network (DCN) and Attention Factorization Machines (AFM); and existing algorithms A lot of optimizations have been done, such as refactoring the LINE and K-Core algorithms, and the performance and stability of the refactored algorithms have been greatly improved.

Comparison between Spark and Spark On Angel algorithms 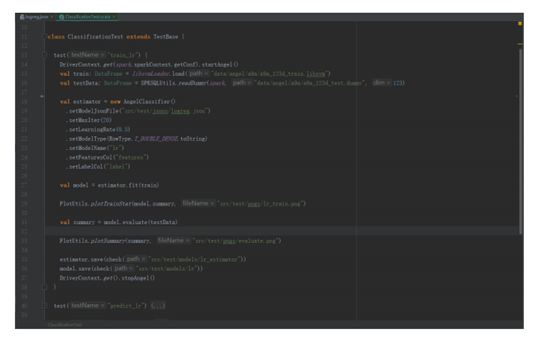 The above figure provides an example of a distributed algorithm based on Spark On Angel, which mainly includes the following steps:

After the training is completed, Spark On Angel will showcase a variety of model metrics such as accuracy, ROC curve and AUC. The user can save the trained model for next use. 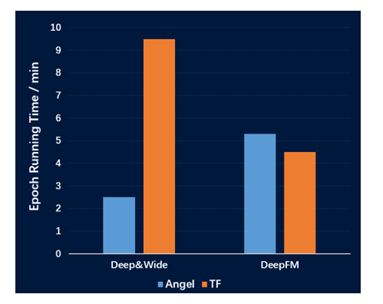 PyTorch On Angel is a new feature in Angel 3.0 that is designed to solve large-scale graph representation learning and deep learning model training.

In the past few years, the graph convolutional neural network (GNN) has developed rapidly, a series of research papers and related algorithms have emerged: such as GCN, GraphSAGE and GAT, research and test results show that they can learn more than traditional graph representation. Good extraction of graph features. Tencent has a large social network (QQ and WeChat), and has a large demand for analysis of graph data. The graph indicates that learning is the basis of these analyses. Therefore, Tencent has a strong demand for GNN, which is why we develop PyTorch On. One of the main reasons for Angel.

The representation of large-scale graphs faces two major challenges: the first challenge comes from the storage and access of hyperscale graph structures, which requires the system not only to survive but also to provide efficient access interfaces, such as the need to provide efficient The interface to access the two-hop neighbor of any node; the second challenge comes from the GNN calculation process, which requires an efficient auto-derivation module.

By analyzing Angel's own situation and the existing systems in the industry, we have the following conclusions:

In order to combine the advantages of both, we developed the PyTorch On Angel platform based on Angel PS. The basic idea is to use Angel PS to store large models, and use Spark as a distributed scheduling platform for PyTorch, which is called in Spark's Executor. PyTorch to complete the calculation.

The architecture of PyTorch On Angel is shown below: 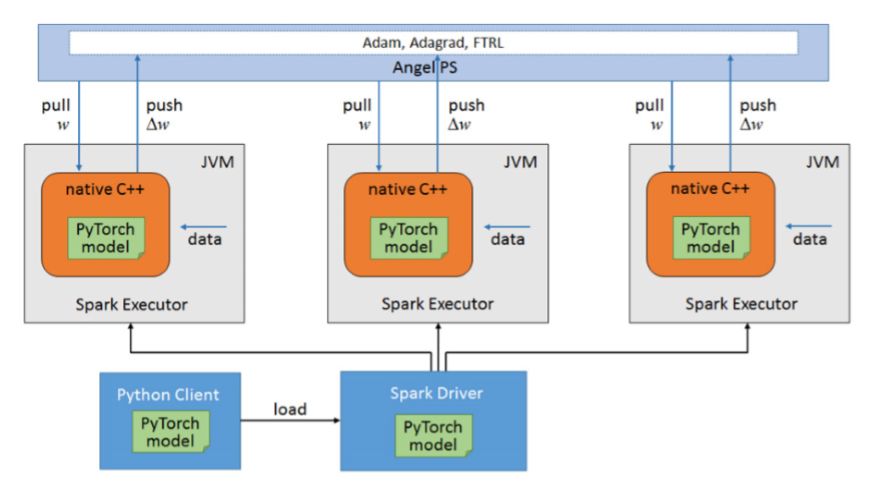 PyTorch On Angel has 3 main components:

Of course, these details are encapsulated, and algorithm developers and users don't need to know. Developing a new algorithm on the PyTorch On Angel platform requires only a focus on the algorithm logic, which is not much different from developing a stand-alone PyTorch algorithm. An example of the implementation of a 2-layer GCN algorithm is given below: 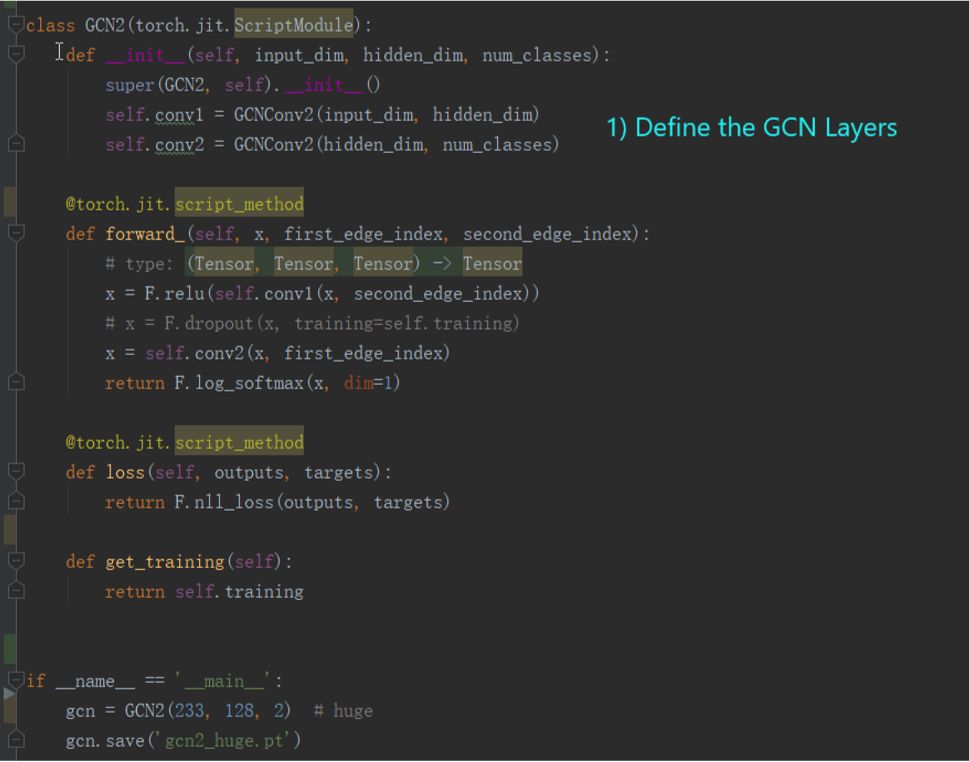 Example of implementing GCN on PyTorch On Angel

After the algorithm is developed, save the code as a pt file and submit the pt file to the PyTorch On Angel platform for distributed training.

Combining the advantages of PyTorch and Angel, PyTorch On Angel has great advantages in algorithm performance: the performance of the deep learning algorithm common in the recommended field can reach more than 4 times that of TensorFlow; for GNN algorithm, the performance is far better than the current one. The same type of platform open source in the industry (specific performance data will be published in the open source community). The following figure is a comparison test on the public dataset criteo kaggle2014 (45 million training samples, 1 million features): 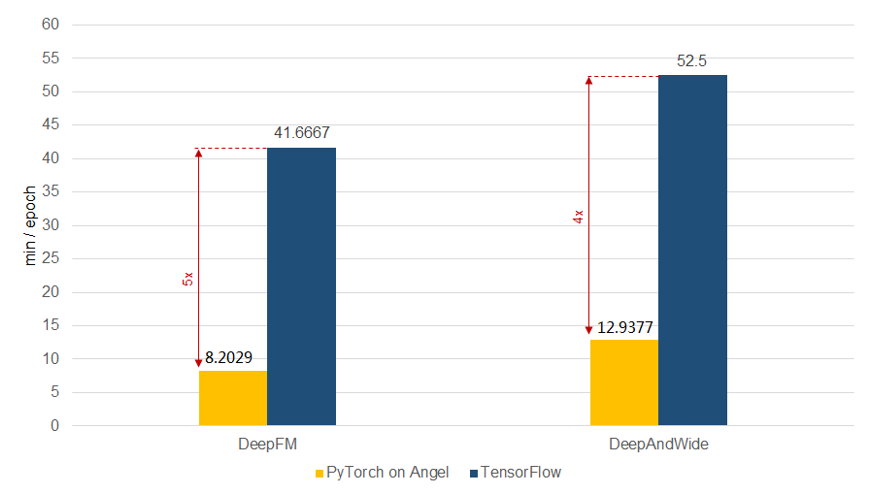 In addition to the performance advantages, PyTorch On Angel has a big advantage is the ease of use. As shown in the figure "PyTorch On Angel System Architecture": PyTorch runs in Spark's Executor, which enables seamless interfacing of Spark graph data preprocessing and PyTorch model training, and completes the entire calculation process in one program.

There are two ways to adjust the traditional hyperparameters (as shown below):

To meet the needs of efficient model services in a production environment, we implemented the Angel Serving subsystem in Angel 3.0, a scalable, high-performance machine learning model service system that is a full-stack machine learning platform. Angel's upper service portal allows the Angel Eco to form a closed loop. The figure below shows the architectural design of Angel Serving. 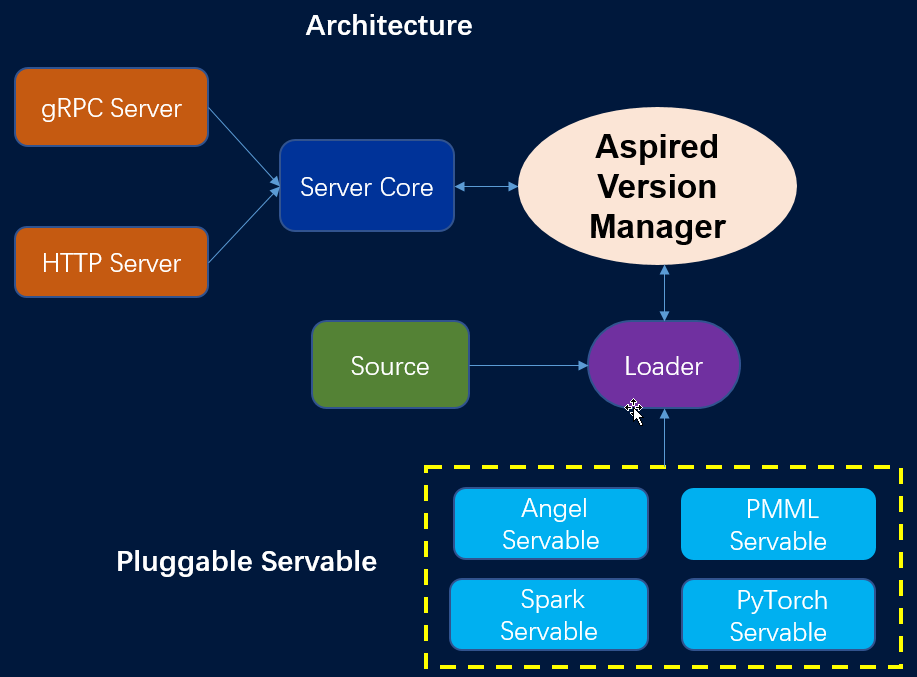 The main features of Angel Serving include:

Angel 3.0 supports Kubernetes so it can run on the cloud. 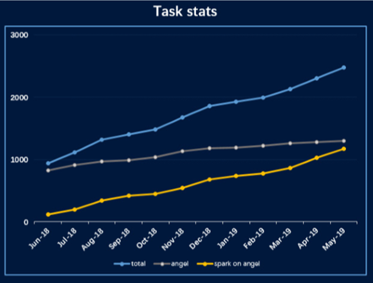 Angel's statistics on GitHub and papers by Angel

Since the open source in June 2017, Angel has received more attention. As of now, Angel has more than 4200 Stars on GitHub and more than 1000 Fork. The Angel project currently has a total of 38 code contributors, and the other includes an 8-bit committer, which submitted more than 2000 commits in total. Tencent's total number of projects on GitHub has exceeded 80, covering AI, cloud computing, security and other fields, with a total of more than 230,000 Stars.

From 1.0 to 3.0, Angel has undergone tremendous changes, from a single model training platform to a machine learning process, including its own general-purpose computing platform, with more than 500,000 lines of code. For subsequent maintenance and ease of use, Angel is split into 8 sub-projects and placed in the Angel-ML directory (https://github.com/Angel-ML): angel, PyTorch On Angel, sona (Spark On Angel) , serving, automl, mlcore, math2 and format, these sub-projects are described in detail above.

The above picture shows a use case of the Tencent short video department. The user's video playback log and context information are forwarded to Kafka in real time, and the streaming data engine Storm subscribes to Kafka's data. Storm is a real-time feature generator that takes user portraits and video information from an offline key-value store and stitches the two together to generate features. The generated features are transmitted to the online training system to update the online model; at the same time, these features are also dumped to HDFS as input for offline training. The offline model is usually used to initialize the online training system. When an abnormality occurs, the offline model can also be used to reset the online system.

The recommended algorithm used in this case is FM, with 2.4 billion training samples and a feature dimension of 63611. It takes more than 10 hours to train on Spark and 1 hour after applying Angel.

Financial fraud detection is a common case of large-scale graph learning. Its network data is heterogeneous and contains several different types of edges:

Financial scammers often share devices and Wi-Fi to generate communities by extending edge relationships. The fast unfolding algorithm on Angel can effectively discover these communities. Downstream fraud risk models can use the user portraits and network characteristics of these communities as input to learn and push to anti-fraud strategies. The graph data contains 1.5 billion nodes and 20 billion edges, and the implementation based on Spark GraphX ​​takes 20 hours, while Angel takes only 5 hours.