Wang Xing: China's urban population is inclined to not cook. 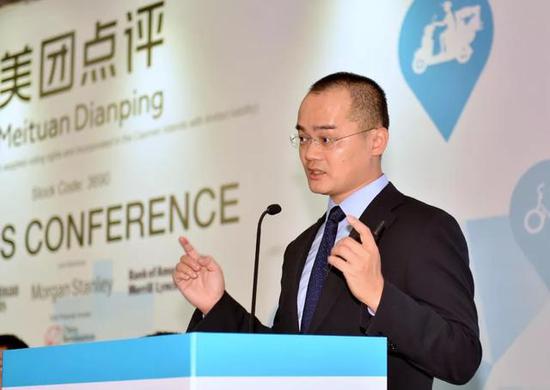 At the telephone conference after the release of the earnings report, Wang Xing, founder and chairman of the US group, said: "We have been improving operational efficiency, reducing losses and coordinating resources among different business segments in the past few quarters."

Liu Yuan, co-director of China Internet at UBS Investment Research Department, told reporters that “we saw a lot of fierce competition in the past few years (such as the US group and hungry). Now everyone will be more rational, not for these companies. When it comes to income, we must also talk to investors about the increase in profit margins."

The outside world is concerned about whether the US group can maintain its momentum.

Wang Xing expressed confidence in the continued growth of the export market, and the food and beverage take-out business accounted for 56.6% of the US group's operating income.

"China has a population of 860 million people. Everyone eats three meals a day, 2.5 billion tons a day. The US group only occupies less than 2% of the market. We will continue to grow in the future because of China's per capita disposable income. It is on the rise, and people tend to be not cooking at home because of convenience and choice. The recent development of China’s take-out business has been accelerating, and we believe this trend will continue.” Wang Xing said .

In the second quarter, the core food and beverage take-out business of the US Mission achieved the first adjustment of operating profit, which boosted the overall financial performance. The revenue increased by 44.2% year-on-year to RMB 12.8 billion, and the transaction amount increased by 36.5% to RMB 93.1 billion.

The US Mission explained that the growth of the take-away business benefited from favorable seasonal effects and further enhanced economies of scale, as the second quarter has more capacity and the most favorable weather conditions in the country, helping to minimize the payment to the outsiders. The seasonal reward amount, which makes the second quarter usually the most profitable season. In addition, as platform trading volume increases, the probability of collecting more orders in a single ride is increased.

However, due to the weather seasonal factors, the US group's ability to maintain profitability in the summer and winter of the third and fourth quarters remains to be verified.

In the analyst conference call, Chen Shaohui, senior vice president and CFO of the US Mission, said that the cost of take-out distribution in the quarter was lower than that of the previous year. "The weather in the third quarter is quite good, because the demand for take-out in the summer and summer is relatively large, but the distribution is relatively large. The cost will increase because we have to give the rider more subsidies to motivate the weather. The order growth rate in the fourth quarter will be lower, less than the third quarter, and because the winter is very cold, we have to give the rider a greater subsidy incentive. Overall The second quarter is the best quarter, because the weather is not too hot or too cold, which is an important factor in our profitability."

Talking about the competition with hungry, Wang Xing stressed, "I think that take-out is a huge market and can accommodate many enterprises. This industry is still relatively new and is in the early stage of development. The enterprises involved can be from this industry. Benefit from the huge potential."

In addition to the outstanding performance of the take-away business, the gross profit of the innovative business including the sharing of bicycles and network vehicles has also turned positive. The revenue increased by 85.1% from 2.5 billion yuan in the same period last year to 4.6 billion yuan in the second quarter of this year. It was 9.1%, which was improved from -76.4% in the same period last year.

The US group said that the operating loss of the shared bicycle business in the second quarter was significantly narrowed, mainly due to the fact that some bicycles have expired and no longer depreciated, and the new replacement bicycles have not been released in large quantities, and the depreciation has been greatly reduced. The US group said it will continue to optimize its pricing strategy and begin to increase the cost of each ride and the monthly subscription fee in several cities.

In terms of network car, Meituan launched a convergence mode in 42 cities. The US Mission believes that adding the network car service to the Meituan App will help to further increase the user transaction frequency and user viscosity.

In the store and wine business segment, revenue in the second quarter increased by 42.8% from the 3.7 billion yuan in the same period in 2018 to 5.2 billion yuan.

In the conference call, Wang Xing also talked about the strategy of the US Mission in terms of investment. Wang Xing said that the US Mission will continue to invest in various fields, such as supply-side operations, to improve distribution efficiency, promote industry growth, and consolidate the long-term industry leadership of the US group. "Overall, we will continue to adhere to ROI ( ROI-oriented investment strategy. A balance between growth and unit economic efficiency." 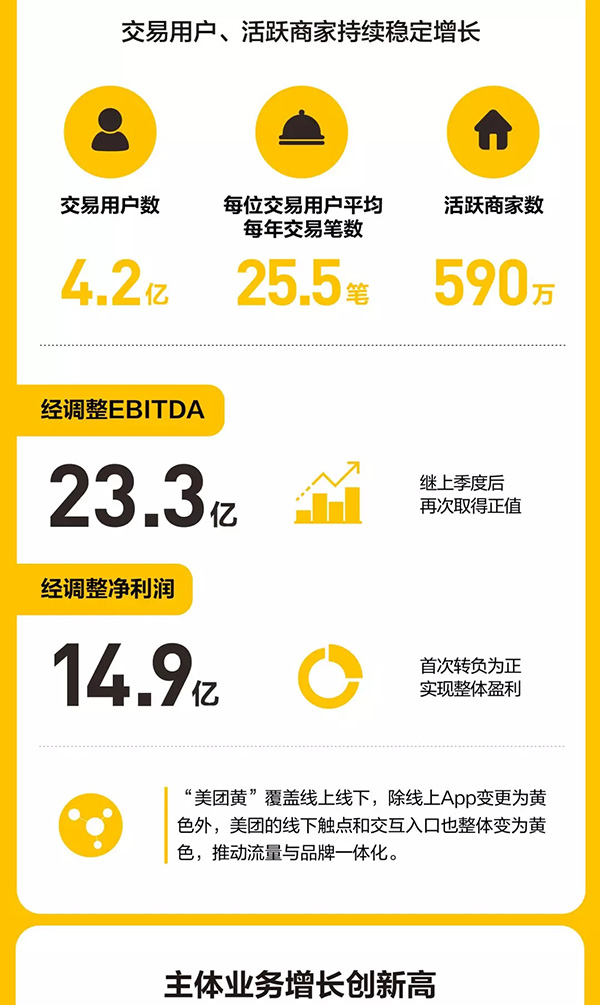 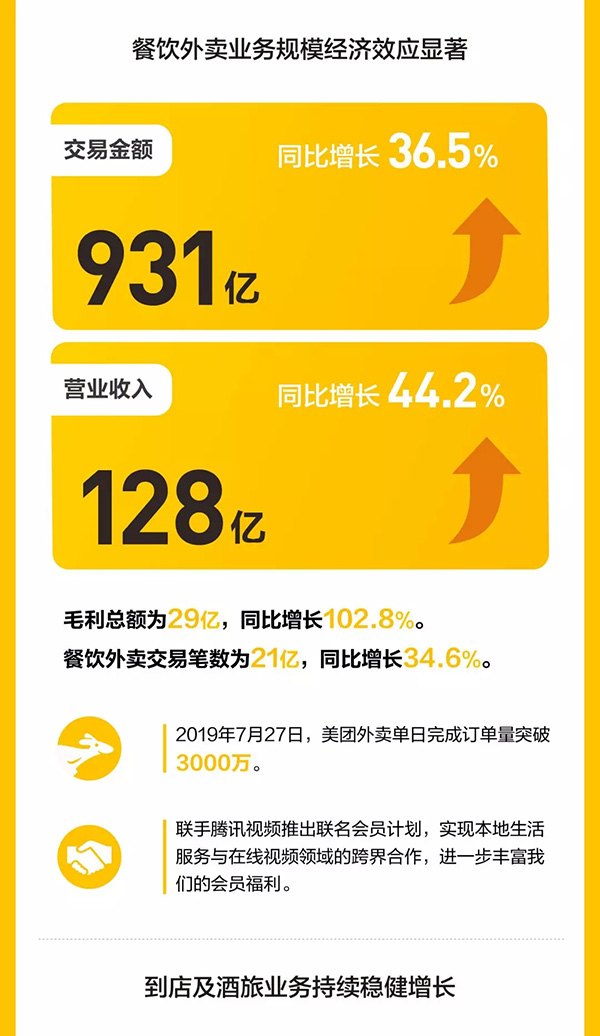 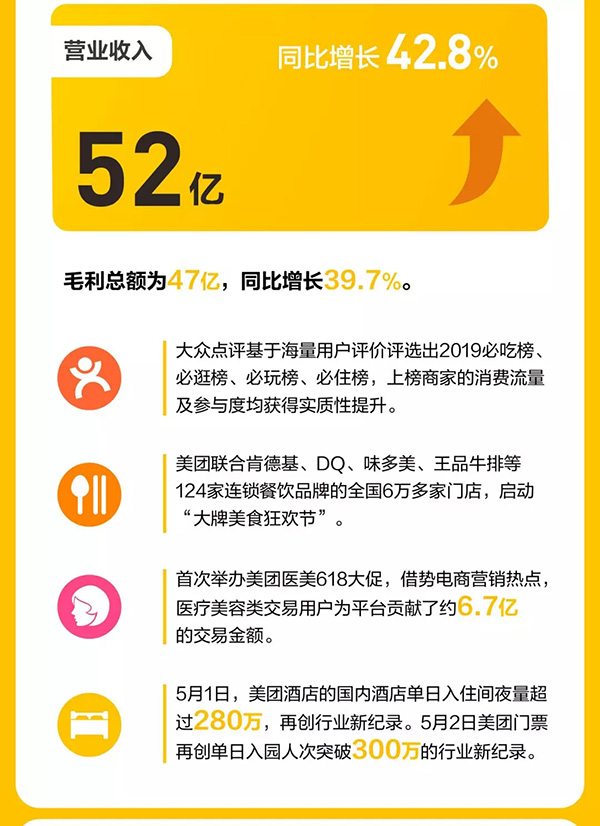 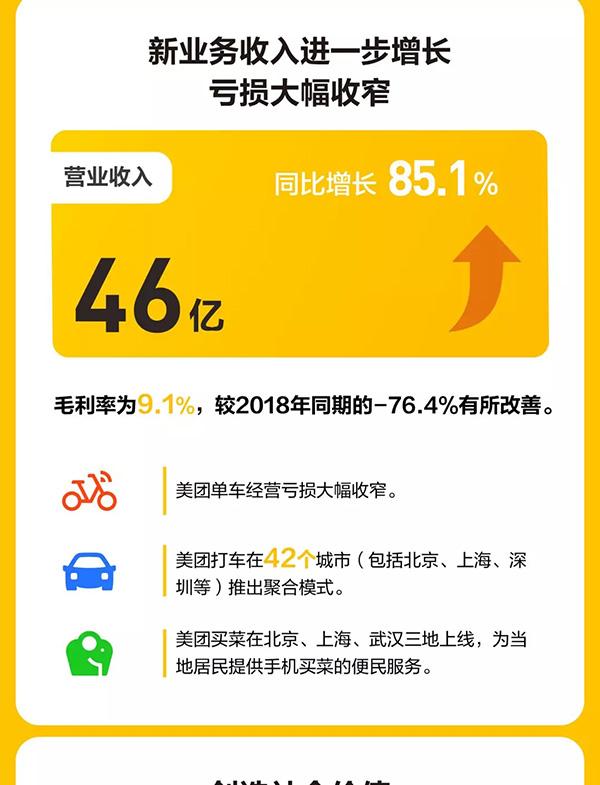