Mars rock is named "Rolling Stone" by NASA. About the size of the golf ball (Figure)

The new website August 24th reported that the Rolling Stones won almost all the honors in their legendary career, and now they also began to create "rock history" on Mars. A few days ago, NASA announced that it would name a rock on Mars with "rolling stones". According to the photos taken by the InSight Lander, this is a golf-sized stone. 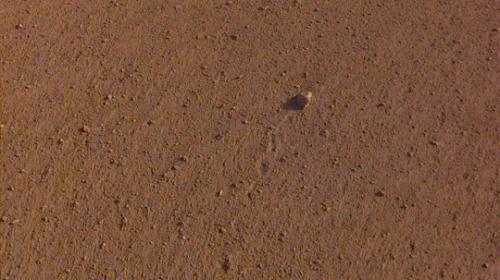 When the “Insight” lander landed on Mars on November 26, 2018, its propellers blew the rock away, and it was about 3 feet —— making it a veritable “&ltquo ; Rolling Stones & rdquo;. (Source: NASA official website)

On the evening of the 22nd, local time, at the Rose Bowl concert in Pasadena, California, actor Robert · Downey announced the honor before the Rolling Stones appeared. The stadium is just three miles from NASA's lab responsible for the Mars “Enhanced” mission.

“NASA gave something that we have always dreamed of, our own stone on Mars,” said Rocker singer Mick · Jagger said, “I can’t believe it.” I want to take it back and put it on our mantelpiece. ”

When the “Insight” lander landed on Mars on November 26, 2018, its propellers blew the rock away, and it was about 3 feet —— making it a veritable “&ltquo ; Rolling Stones & rdquo;. NASA said at a news conference that this is the farthest stone they have ever seen when landing on another planet.

However, NASA stated that the name is not an official name because the International Astronomical Union is responsible for assigning scientific names for places and objects in the solar system, such as the location of planets, asteroids, and other locations. NASA scientists often nickname rocks and geographic features to help distinguish them. “Although the name Rolling Stone is informal, it will appear on the red planet's work map,” NASA's statement said.