Research for newcomers: Baidu search for fake journal official website What should I do after the paper is submitted?

Wang Li does not know where this paper will eventually go. It may be sold, and the name of another person on the department is published in a journal.

In academic forums, on social networks, you can often see help from newcomers like Wang Li – I voted for a fake journal, what should I do?

Wang Li is a graduate student at a 211 college in Beijing. She is about to graduate. She still needs a thesis. 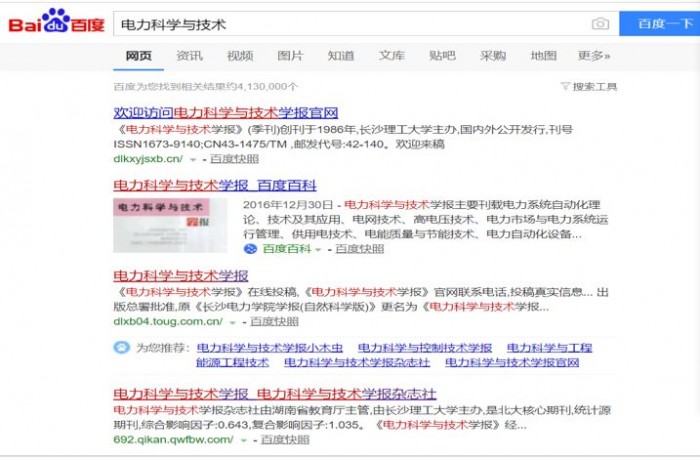 The other party replied to her with another mailbox, saying that the paper had been received and asked him to transfer a 100 yuan page fee to a personal bank account, saying that the review fee is not applicable to the public account.

On July 10th, the "Editing Department" sent Wang Li a notice of the manuscript she was looking forward to. "Because the journal is checking the account for the public account, it is temporarily unable to send money." The email asks Wang Li to transfer the page fee to 700 yuan to another private account. 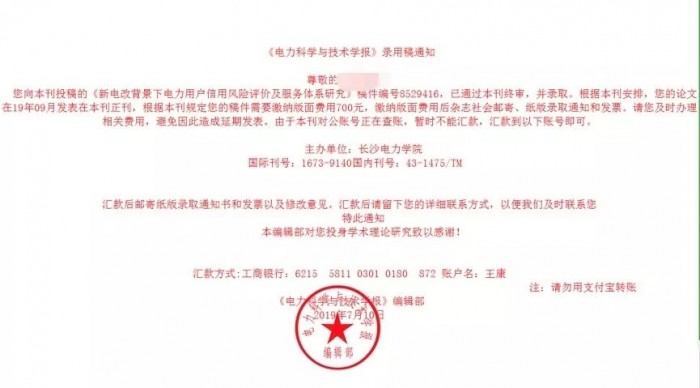 If the paper can be published smoothly, there will be no problem in graduation. Wang Li feels practical. After transferring the page fee, she also revised the paper under the guidance of the laboratory teacher. On July 24th, the “Editing Department” told her that she would give her a paper version of the employment notice within 10 working days.

That was the last time the "Editing Department" replied to Wang Li's email.

On August 15th, Wang Li met in the lab and gave a message about how to transfer the money. Another classmate reminded her that you were cheated.

The student submitted a manuscript to the Journal of Electric Power Science and Technology in the same mailbox in 2018. The whole process is exactly the same as Wang Li's – he was cheated of the review fee of 100 yuan plus 900 yuan. Since the transfer in December last year, the editorial department has no movement.

Losing money and losing the waiting time. In the unlikely event that a dissertation affects graduation, it will involve a series of things, such as work and settlement. "It’s too pitted, it’s too bad.” Wang Li felt anxious.

She has another panic.

Previously, Wang Li had been heard that there was a black chain of paper sales. Now, she is worried that her paper will become a merchandise sold on the chain.

The reporter searched the scammer for the mailbox left by Wang Li and his classmates and found that these mailboxes are not a fake journal. The mailbox bjbbmfy@163.com, which communicated with Wang Li, also issued a notice of acceptance as the editor of the "Northern Forum"; another mailbox sgzhbjb@163.com pretended to be "Qinghai Ethnic Studies" and "Heilongjiang Higher Education Research" And other journals. In other words, the scammers run far more than one journal website.

The "Northern Collection" issued a statement in January 2017 and exposed several fake mailboxes. But until now, search for "Northern Forum" and enter the "official website" ranked first in the search results. The submission mailbox is the fake mailbox that has been stamped and certified in the "Northern Forum" two and a half years ago. This fake website is still operating normally. 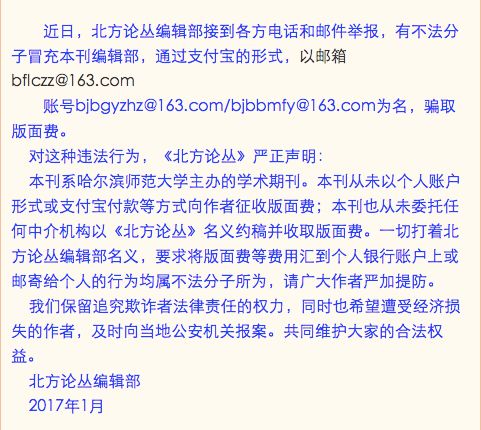 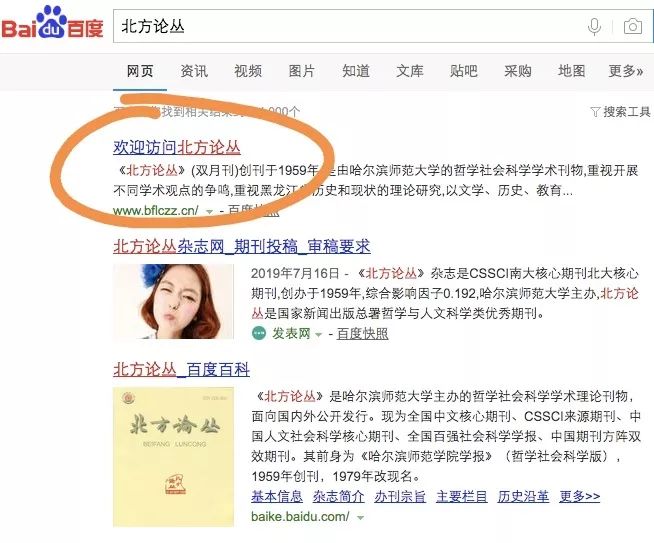 The fake website is still the first in search results.

Postdoctoral researcher of Zhejiang University Science and Technology and Law Research Center suggested that the best channel for collecting submission information is to consult paper journals. If the conditions for accessing the paper version are not available, you can go to the official website of the competent department or the organizer and check it at the first level.

In addition, we must recognize the facts and not report illusions. “Currently published papers and academic journals are typical of the 'seller's market'. Unless you have become an academic bull, the good thing of today's submission will be missed.” Guo Wei reminds, “Remember two points. : First, the submission of the draft for three months is the norm; second, the rejection of the submission is the norm. If you are 'one shot in the middle', then it is likely to be a trap of the liar - the use rate in the journal scam 'But 100%.'

Expert: It is recommended to establish a unified journal submission information query platform.

Journal scammers have always been there, and the amount of scams is not small.

According to the referee paper network, it can be found that in 2018, the Beijing Second Intermediate People's Court heard a fraud case. The judgment pointed out that between April 2015 and April 2016, the defendant made false journals and magazine websites to trick victims into submitting articles, and then pretending to edit, fictional facts that could be published in the corresponding publications, by e-mail or telephone. The initial review fee and the page fee were named, and several victims from all over the country were sent to the designated account for remittance, with a total amount of RMB 3.65 million.

Feng Wei, a teacher at Zhejiang University of Finance and Economics, told the Science and Technology Daily that the behavior of journal scammers is a typical fraud and conforms to the constitutive elements of fraud. In this case, Wang Li can report the case to the public security organ. False websites infringe on the reputation of journals, but most journals respond by issuing statements on their official websites, and the cases of genuine litigation are rare.

“The black product around the paper can always exist because we do have the social needs of the paper.” Hu Shenghua, deputy editor-in-chief of Science Press, said that under the current research evaluation system, almost everyone in all walks of life must send papers. It also gave birth to a huge market. Some scientific researchers actively write or find people to write essays, and they do not have enough reverence for academic norms. Academic misconduct is often not punished, and it also encourages some people's luck.

Among all kinds of scams, in addition to the above mentioned "true journals, fake submissions mailboxes", as well as fake publications of "nothing to be born", as well as "water publications" with regular publications but actually only for money, or were concocted The fake supplement of regular journals... Among the deceived, the situation is also varied. Some of them are not academic enough, and they are convinced of the so-called "generation and generation of hair"; some are for the purpose of publishing papers, and they have specifically found the "water magazine" that can be sent for money... "There are many kinds of patterns, and the market order is actually very chaotic."

Hu Shenghua said that the public can check the information of journals and periodicals in the official website of the State Press and Publication Administration, but most of them can only find the name and issue of the journal. Some journals also do not have an official website at all, giving the scammer a chance. He suggested that the management system should be standardized, and that journals should improve their submission and review systems; build a unified inquiry platform, and let journals publish their own review mailboxes, contacts, editorial addresses and telephones on the platform. "In addition, the relevant law enforcement agencies should be more effective in cracking down on fake journals and fake websites, and increase the criminal costs of criminals."

Guo Wei also believes that the fundamental solution lies in the strict management of Internet information portals. Search engines rank journal scammers at the forefront of search results, hide real journal sites on the second page, and even more, "it's hard to say that it's not an ethical issue." Researchers can also try to unite “crowdfunding” a credible journal submission query system. “It is not difficult to build a system. It is difficult to maintain and maintain information on a regular basis and requires continuous investment.”

But for Wang Li, these are all words.

On the 21st, Wang Li received another email.

The email accurately tells the name of the paper she submitted and asked if she still needs to publish. “We can help you to post to the official journal of Nanda Core or Peking University Core Magazine and charge a small amount of recommended publishing fees. If you are not satisfied with your writing level, we can also help you write it for you.” 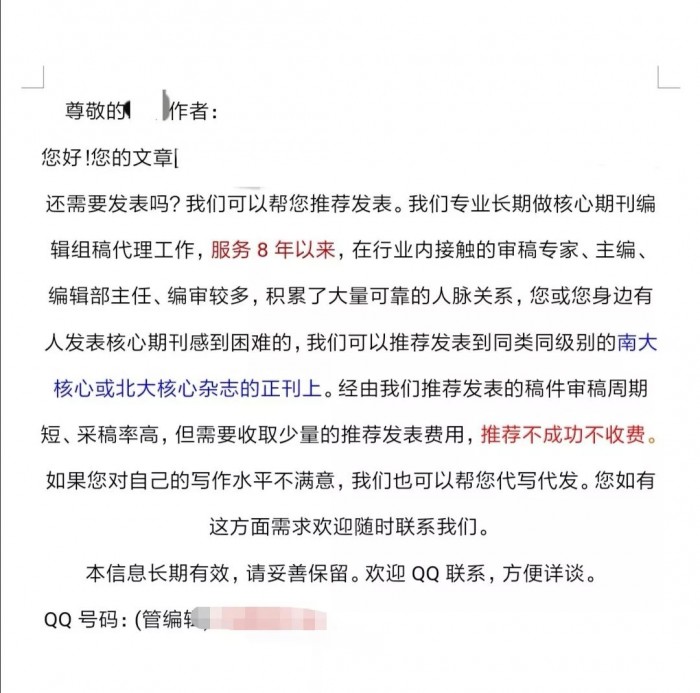 The scammer sent a message again.

Wang Li was shocked - her information might have been sold, or they were simply a group of people.

Moreover, the time of the mail came just right—the author found himself cheated and might be anxious to throw the paper again.

The liar is precise in rhythm, set a trap for her, and wants to kill her for several more rounds.

Wang Li has no energy to deal with. As a victim, in order to avoid more troubles, she must modify the paper that belongs to her as soon as possible.

(At the request of the respondent, Wang Li in the text is a pseudonym)

(The original title is "Fake Website, Fake Mailbox, Fake Editor... How long do journal scammers have to wait?")