Only lived for half a year! AMD 7nm epoch-making products officially died

In early July, foreign media reported that as the world's first 7nm process video card, AMD Radeon VII has entered the stage of decommissioning (EOL), no longer producing new cards, and will completely withdraw after the existing inventory is sold. .

In response to this rumor, AMD's response is also vague: "No matter the gamers or creators, the demand for Radeon VII is still very strong. ”

Matt Bach, senior laboratory technician at Puget Systems, said:“Radeon VII has been discontinued 100%.Before starting this round of graphics testing, we confirmed this directly from AMD.Of course, there are still some surplus goods, but they are no longer produced. ”

Some media have confirmed this to AMD again, and the response is still ambiguous:“Radeon VII will continue to meet demand in the foreseeable future, providing an excellent high-end 4K gaming and content creation experience.You can find Radeon VII on the AMD website.” 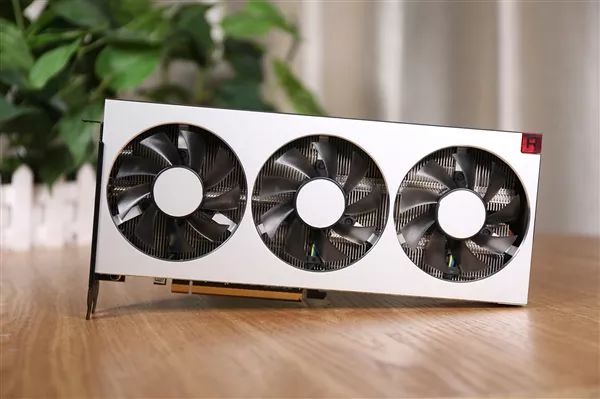 In view of the current signs, the delisting of the Radeon VII is not unexpected.

Radeon VII graphics card uses AMD's first 7nm process GPU core Vega 20, so the architecture and RX Vega 64 change little, but the stream processor unit 3840, the frequency is increased from 1.5GHz to 1.8GHz, with 16GB HBM2 memory, bandwidth is reached At 1TB/s, the capacity and bandwidth are twice that of the Vega series. The domestic price is 5699 yuan, which was officially launched on February 7 this year.

Although it has the world's first 7nm game card aura blessing, and the world's first to achieve 1TB / s memory bandwidth, improved Vega 20 core plus 16GB HBM2 memory also does bring significant performance improvements, but in the face of NVIDIA RTX 20 series Still lacking enough high-end competitiveness, power consumption is also high, and the appeal to gamers is not very large.

However, Google Cloud Games and Apple's latest Mac Pro all use it, which can bring a very substantial profit.

In addition, it is said that the Vega 20 core cost is relatively high, AMD was originally not intended for game cards, and finally it seems that it is only a temporary transition, and even no open non-public version, it is quite different.

Nowadays, the 7nm Navi's new core RX 5700 series has stabilized the market and the response is good. The Radeon VII is also time to retreat, even though it was only half a year after its birth.

At present, in Jingdong and other places, Radeon VII is not rich, and many brands are out of stock. 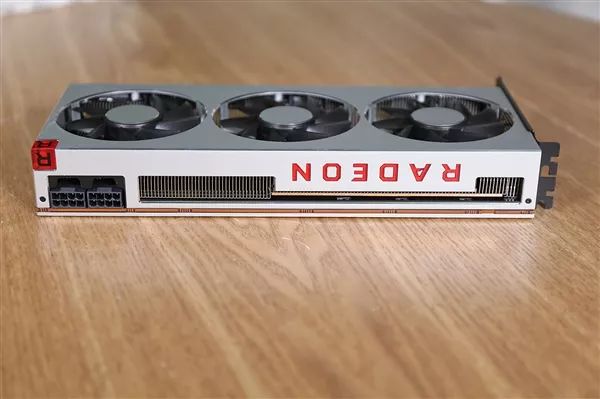 Radeon VII also had a 50th Anniversary Edition with the Ruilong 7 2700X. The red shell is also decorated with a gold box. It also comes with Su Zifeng signature sticker and AMD 50th Anniversary T-shirt, but there is no Su Ma on the card body. signature. 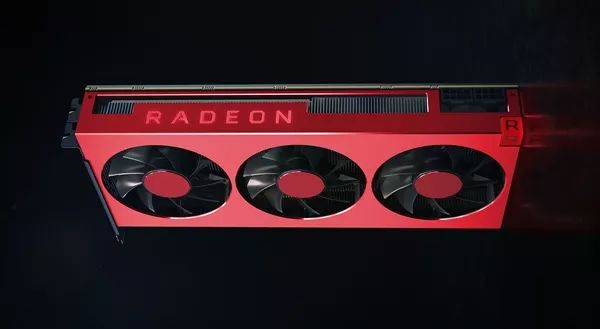 In fact, Radeon VII is still quite powerful, just like who it is.

Italy bitchips website has raised a very interesting point, that is,The performance of the current AMD processor + graphics card combination is stronger than the TOP500 strongest super 15 years ago, is it surprising?

If you calculate it, it’s true. They say that the graphics card and processor combination isSingle EPYC 64 core processor and 2 Radeon VII graphics cards.

And what they call supercomputer refers toEarth Simulator developed by NEC Corporation of Japan (Earth-Simulator)In 1998, the Japanese government invested 60 billion yen in research and development, totaling 5120 cores, floating point performance of 36TFLOPS, theoretical peak performance of 41TFLOPS, and power consumption of 3200KW. It won the TOP500 championship from 2002 to 2004.

Direct comparison, the absolute performance of the combination of AMD processor + graphics card is still surviving the earth simulator super-calculation, but to take into account the huge gap between the two, not to mention the floor space and cost, the light is the power consumption It is a thousand times difference.

With such a comparison, do you think that the speed and change of the computer industry is still quite large? 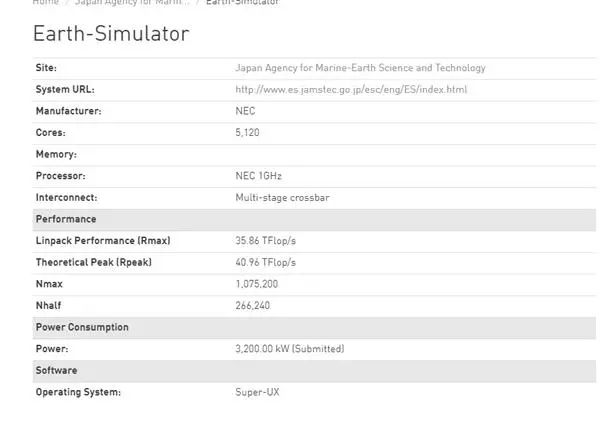 In addition, ASUS recently released two GTX 1650 graphics cards with a half-height knife design. The rare card of this level is also equipped with a backplane.

The overall design is identical, both are half-height PCBs, equipped with the same aluminum fins, two IP5X dust-proof fans, and a complete backplane cooling system.

The backplane is often the standard of the flagship card. It is used for such a compact mainstream card. It is obviously not used for reinforcement. It is more protective and assists in heat dissipation. After all, the power consumption and heat of the GTX 1650 are not large. However, if the card is small, it is easy to concentrate. 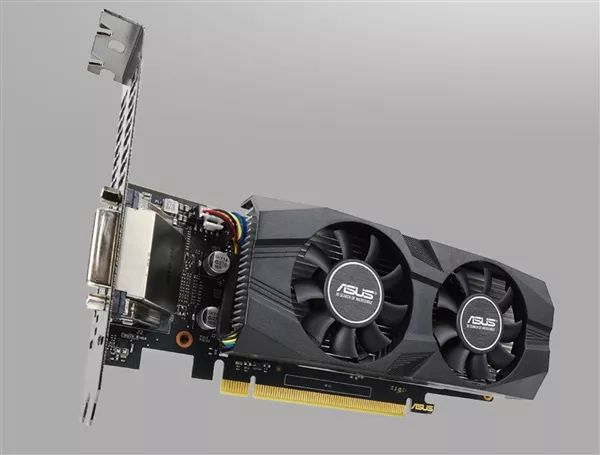 Since the power consumption does not exceed 75W, the auxiliary power supply interface is not required, and the video output interface isOne DVI-D, one HDMI 2.0b, one DisplayPort 1.4, plus pair4Kp60 H.265/VP9 hardware codec, HDR10 contentThe support, used to do HTPC can be described as quite perfect. 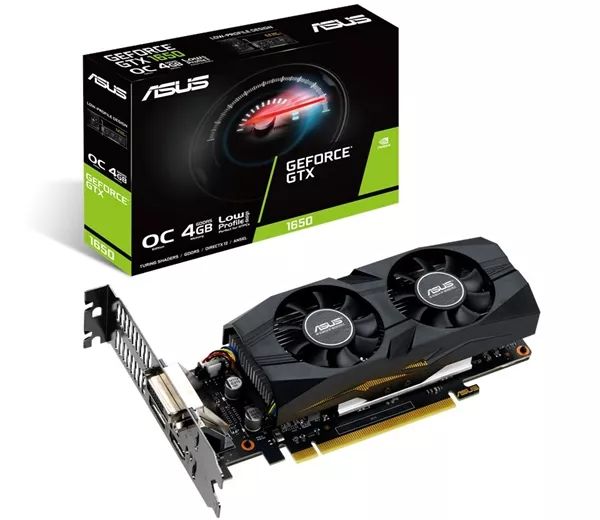 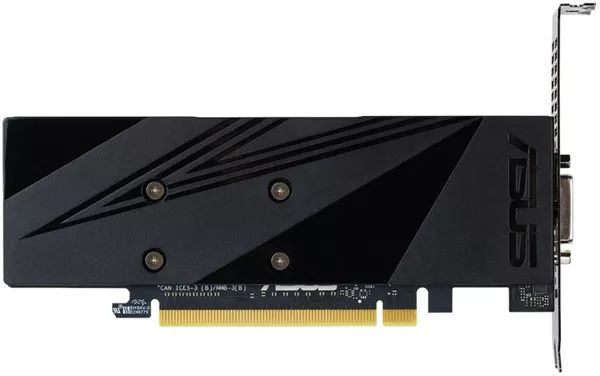 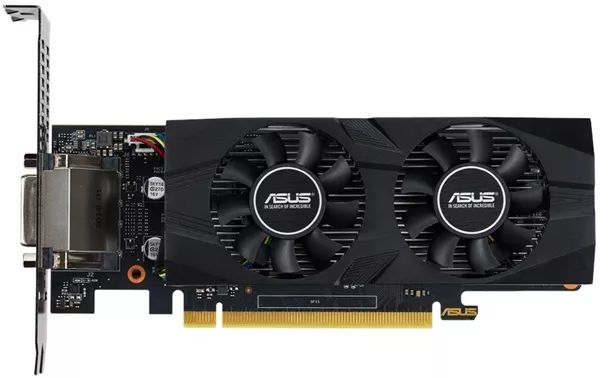 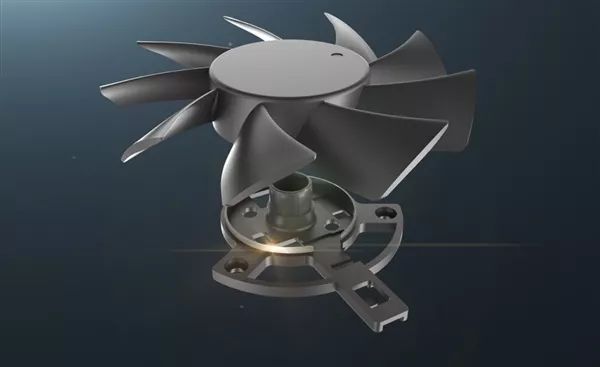