By reviewing past A-series chips and inferring our understanding of the manufacturing processes Apple will use this year, we can have a reasonable expectation for the A13 chip. Almost sure, this will be AppleiPhoneThe strongest SoC developed, but what specific changes can we expect?

A13 is basically sure that Apple and TSMC will continue to cooperate. As the world's highest chip foundry, TSMC has a firm leading position in manufacturing technology. But TSMC is not ready to take a big step toward the new chip process node and leap directly to the 5nm process – like last year's jump from a 10nm process node to a 7nm process node. The 5nm process may be implemented on the 2020 iPhone, and this year's models will still be 7nm.

This does not mean that we can't expect any improvement in manufacturing. On the contrary, TSMC has two improved 7nm process nodes for Apple to adopt.

The basic 7nm process for the A12 chip is called N7, and one of the improved 7nm processes is called N7+. This process uses EUV (extreme ultraviolet) lithography for some chip layers to give the chip a better density (in the same The area logic increases by about 20%) and the power efficiency (about 10%).

In contrast, N7+ is clearly the best manufacturing process for TSMC, and Apple usually uses the best mass production process for its chips. Therefore, N7+ is also likely to be the process used by Apple A13.

The A12 increased the number of transistors to an astonishing 6.9 billion, a 60% increase over the A11's 4.3 billion. But its area is about 83 square millimeters, smaller than A11 (about 88 square millimeters), but it is used in the largest iPhone ever. In fact, it is the smallest iPhone processor in nine years. In the past, Apple's Soc was much larger. Whether it was the long-standing A5 or the A10 chip that was not so long, it was more than 120 square millimeters.

In other words, Apple's iPhone chip will be larger than A12 in general, as well as in the production of new chips with the same manufacturing process as last year. So the conservative estimate is that A13 should not continue to shrink, but will be about 25% larger than A12 (about 103 square millimeters). The volume will increase and the density of N7+ process nodes will increase. The number of transistors in A13 is expected to reach or close to 10 billion. This is equivalent to a new generationiPadThe number of transistors in the A12X on the Pro (smaller than the A12X).

Although the number of transistors in the A13 is expected to be almost the same as the A12X, Apple should not spend the same function on the transistor budget and continue to add the number of high-power CPU cores.

Apple may rely on some relatively small architectural adjustments and possibly better peak clock speeds to improve CPU performance. After all, the A-series chips are already the fastest in the world, and it is not difficult to keep this title.

In recent years, Apple's single-core CPU performance has been very stable. If this trend continues, we will see that the A13 single-core score given by Geekbench 4 is around 5200, which makes all AndroidMobile phoneEven the thinnest laptops are eclipsed. 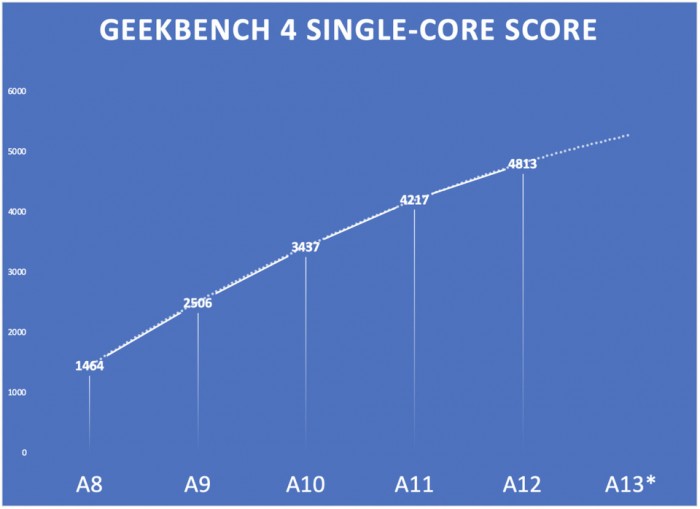 Multi-core performance is harder to predict. Due to changes in Apple's design, all low-power and high-power cores can work simultaneously without switching back and forth, so multi-core performance jumps instantaneously when A10 to A11. In the case that Apple does not add more cores, the A13's multi-core running score may be between 12200 and 12500. If Apple adds a third high-performance core, the score can go to around 15000 - 16000. 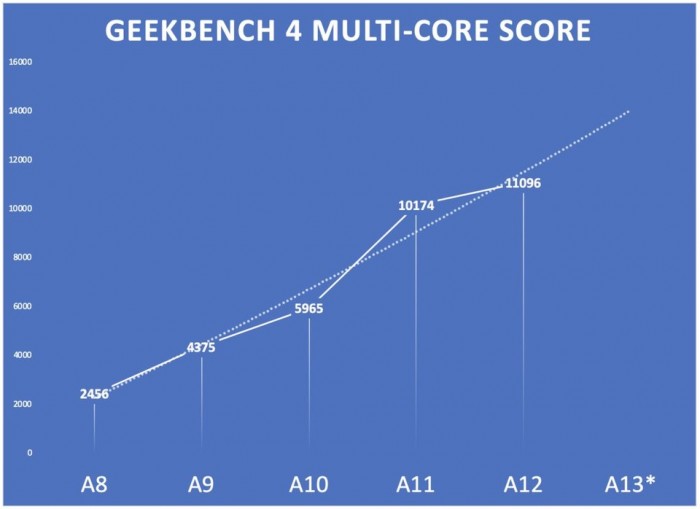 Graphics performance is critical to Apple, especially as it now offers Apple Arcade services with high-end gaming. There are two aspects to GPU performance worth discussing: the ability to render traditional 3D scenes (such as games) and the ability to use the GPU to perform complex non-graphical computing tasks such as image processing.

In the past few generations of A-series processors, traditional graphics performance has grown at a relatively fast rate, with no surprises. Mobile GPUs seldom make a big leap between the year and the next year due to frequent memory bandwidth limitations. If this trend continues, we can foresee that the A13 3DMark runs at around 4500, which is a major improvement for Apple, but not as exciting as Qualcomm's latest chips.

However, with some architectural adjustments and faster memory, you can get up to 20% faster in this particular test, making the score climb to 4800. Apple is more inclined to use its own Metal API to speed up the chip in graphics and computing. This trend will continue, although it may not see its huge Metal performance leap from A11 to A12, we still hope to see Geekbench 4 More than 25,000 GPU runs.

For Apple, computing on the device is critical, and GPU computing performance is one of the most important aspects, and the 20% improvement is normal. 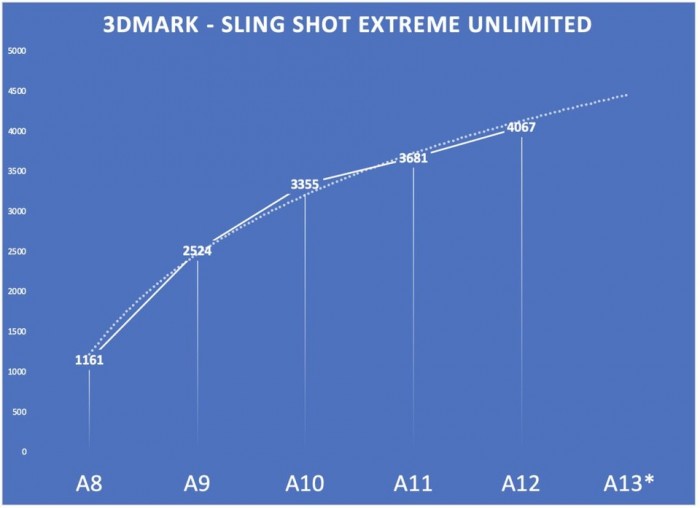 As mentioned earlier, the A13 is expected to be about 25% larger than the A12. It also uses an upgraded manufacturing process that allows more transistors to be inserted in a smaller area—about 10 billion transistors, more than the A12. More than 40%.

If the CPU and GPU can achieve modest and predictable improvements with only minor design adjustments and clock speed improvements, then where does Apple have to spend so much transistor performance?

The answer is to improve the performance of machine learning and image processing on the device. Last year, Apple's improvement of the A12 processor's neural engine far exceeded expectations. A11's neural engine can perform 600 billion operations per second, while Apple has increased the speed of the A12 by eight times to 5 trillion times per second. We are not sure if we will see such a big leap this year, but with design improvements and more transistor budgets, Apple is likely to achieve a 3 to 5x improvement to 20 trillion operations per second. 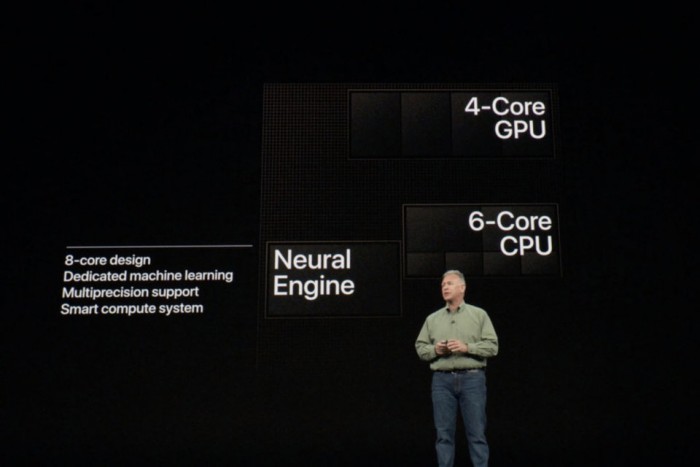 Machine learning and artificial intelligence are now a key part of the iPhone experience, from taking better photos and videos to AR and Siri, which are used everywhere. We have reason to believe that Apple will put more effort into the nerve engine.

The Image Signal Processor (ISP), which handles camera sensor data, is another key component that is difficult to benchmark. Apple is investing heavily in this area every year, constantly trying to make the iPhone's camera the best. It is used along with neural engines and GPUs to improve the quality of photos and videos, and Apple will undoubtedly improve its performance this year.

A13's ISP may even be the first to include encoding and decoding new AV1 video codecs, and most online video (such as YouTube and Netflix) may transition to this new video format in the next few years.

Recently, a new component of A13 was mentioned in a Bloomberg report. It is described as follows:

There is a new component in the chip, internally called the "AMX" or "matrix" coprocessor, which handles some computationally intensive tasks, frees the performance of the main chip, and may contribute to both machine vision and augmented reality. Core features.

For this mysterious coprocessor, there are still many different opinions. Some think that it is actually the neural engine of A11 and A12. It is just a new name for the same function, and it is a better brand for its extended function. Some people think that this is completely different. AMX may be a new math collaborative processing unit, or a set of SIMD instruction set extensions, just like the SSE and AVX instructions we have seen on desktop processors for many years. 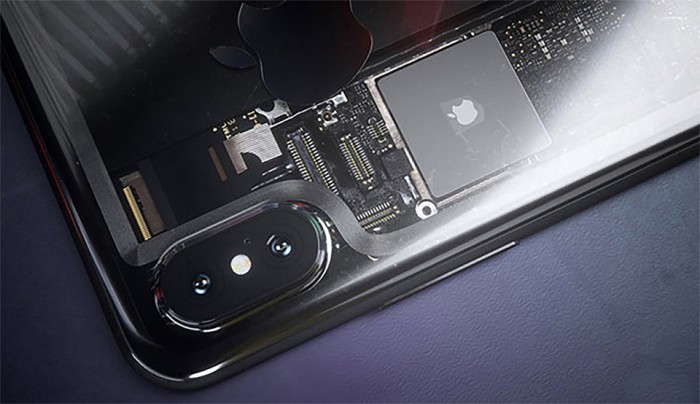 Although the iPhone baseband is not part of the Apple A-series processor, it's worth discussing this big enough expectation. 5G is already within reach, operators are starting to push customers to buy new 5G phones, but 5G is still in its infancy, network coverage is very limited, this is the case throughout 2019, and baseband chips supporting 5G are not very energy efficient. .

Someday you will get a 5G iPhone, but it won't be until 2020 or even 2021. It takes a long time to equip the iPhone with a reliable, power-efficient baseband chip, plus enough network coverage for formal hardware and software testing. After all, Apple is not just selling iPhones to millions of early adopters. The new iPhone is likely to sell more than 100 million units in its first year. This volume has determined that Apple is not willing to take risks on network chips.

As Apple and Qualcomm reach a settlement, we expect that this year's iPhone will only use Qualcomm 4G LTE baseband chips, which may be the Snapdragon X24.