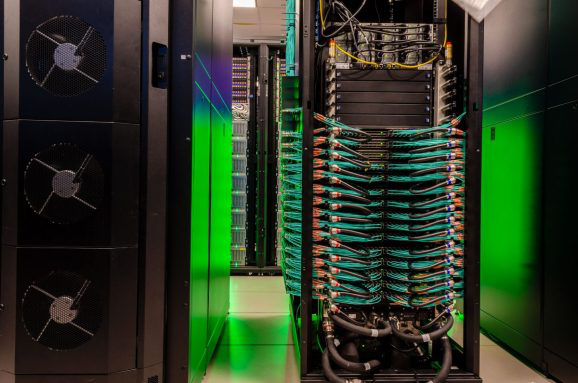 Intel claims that Frontera can achieve up to 38.7 petaflops per second, making it the fastest computer in the world to support academic work in modeling and simulation, big data and machine learning. In contrast, Stampede 2 has a peak performance of 18 petaflops.

"The Frontier a system will provide the researchers with unprecedented computational and artificial intelligence capabilities for academic research,", General Manager, "With Intel's technology, the new supercomputer opens up new possibilities in the field of science and engineering, and can advance research, including the understanding of the universe, medical treatment and energy demand." Intel Vice President and Intel's Extreme Computing Organization, said.

Most of Frontera's nodes use liquid cooling, and each node is expected to consume approximately 65 kilowatts of electricity, most of which comes from solar and wind power.

On the storage side, Frontera uses four different channels built by DataDirect Networks for a total of more than 50PB and 3PB of NAND flash, which means that each node has approximately 480GB.SSDstorage. Three of the channels are interoperable, while the fourth channel has a fast connection of 1.5TB per second.

Frontera has now been used to simulate neutron star impact fusion and attempt to explain the origin of the burst energy in its process. In addition, academic teams have used it to establish biophysical models of brain tumor development to more effectively diagnose and treat gliomas. The University of North Carolina is using Frontera to train an artificial intelligence model that describes the force field and potential energy of a molecule based on its three-dimensional structure.

Related news
Does the seemingly powerful PCIe 4.0 really work? Why does AMD blow up Intel but don't care?
Intel Xe alone has up to 4096 stream processor units. Performance is comparable to RTX 2080 Super
Intel releases the world's fastest super academic computer Frontera
IEEE Computer Magazine will be published in Chinese in 2020
Hot news this week
Xiaomi's new keyboard and mouse product: keyboard can't only be used for typing
$101.58 billion! China's integrated circuit exports hit a record high in 2019: processor accounts for 35.1 per cent
Ali, Tencent join the bureau," health code "can really replace the pass?
Opening of AMD's official store: Ruilong Limited gift box $150
Novel coronavirus pneumonia CDC may be followed by China's suspension of work and suspension of school
Here comes the 7 nm sharp dragon! Lenovo released ideapad slim 7 amd version on the US official website
"Cloud conference" is coming! Suning will broadcast Huawei new product conference live: held online on February 24
Samsung TV's global sales volume is the first for 14 consecutive years: qled is twice as big as LG OLED
Alipay's 240 thousand living materials rush to Wuhan, including 70 thousand packets of diapers / sanitary napkins, etc.
Climate change may dry up this river in the United States. Millions of people will be seriously short of water
The most popular news this week
Over $200 million! The world's first 6nm EUV SOC will become a 5g mobile phone universal logo
Real time update of business hours and scenic area business hours during Baidu epidemic on search service
Novel coronavirus pneumonia branch of the NetEase, Hangzhou, is responding to the call of the CPC Central Committee to support donations for the prevention and control of the new crown pneumonia.
Intel requires staff: do not go to China, Japan and South Korea and other countries, symptoms at home isolation
Huawei Changxiang becomes a "game machine" to help you play
Haven't you recovered? Try this kingsoft efficiency artifact
China's first cloud office graphite document completed tens of millions of dollars of financing
What about computer is too laggy and the disk is too full? Jinshan poison bully C disk slimming one click
Microsoft releases win10 1903 / 1909 update: fix a big wave of problems
The recovery and growth of Baidu's core business helped Baidu's revenue grow 6% year on year in the fourth quarter